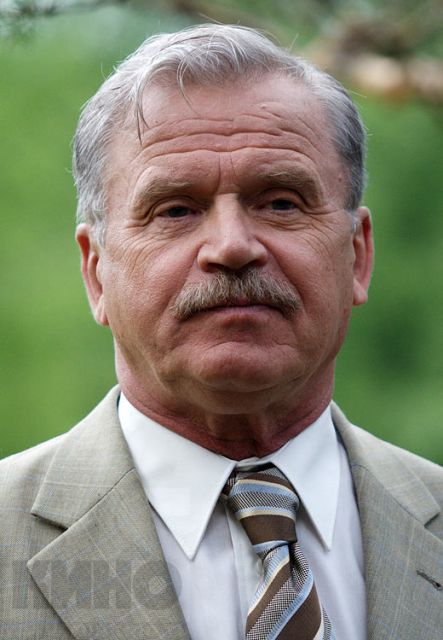 Member of the Union of Cinematographers since 1968. Founder of the Yesenin Cultural Center (1994).

Sergey Nikonenko was born into a working-class family of a driver and a glassmaker at a lamp factory. The childhood of the future movie actor was typical of that time. For days on end, he disappeared in the courtyard, where the children indulged in a wide variety of games: Cossack robbers, salads, siskins, bast shoes. The family of Sergey Nikonenko lived like all the families of that time, four of them occupied one of the six rooms in a communal apartment on Arbat.

While studying at school, the guy studied music in the accordion class, took an active part in various school competitions of singers and readers, brought home medals and diplomas to the delight of parents.

Sergey Nikonenko began his career early: he worked as a bus conductor, then as a postman, and at the same time he always dreamed of entering VGIK. Sergei did not grow up in an artistic family, but he determined his path for himself early, firmly and forever. The guy woke up to acting already at the age of 13 from a great love for one of the participants in the drama club in the pioneer camp. Returning to Moscow, he enrolled in a theater studio in the city Palace of Pioneers to the teacher Elena Galkina. After graduating from the tenth grade of evening school, Sergey Nikonenko went to realize his dream - to enter the artist.

Sergei Gerasimov, apparently, in addition to talent, managed to discern something very humane in a feeble boy, selecting several lucky ones from his hundreds of applicants to his Vgikovsk workshop. Then this course was called the course of "stars": Zhanna Bolotova, Nikolai Gubenko, Sergey Nikonenko, Zhannna Prokhorenko, Galina Polskikh, Lidia Fedoseeva-Shukshina, Evgeny Zharikov! There was no such "constellation" of celebrities on the course of Gerasimov, by their own admission, since the time of the "Young Guard" - Inna Makarova, Nona Mordyukova, Vyacheslav Tikhonov.

At the institute, Sergey Nikonenko managed to replay almost the entire classical repertoire, including Hamlet, and the diploma performance "Career Arturo Wu", thanks primarily to the play of two actors - Nikolai Gubenko and Sergey Nikonenko, then became a phenomenon not only of the institutional chronicle, but of the whole cultural life capital Cities.

One of the "cult" theatrical works of Sergei Nikonenko is Vasily Chapaev in a play based on Pelevin's novel. Nikonenko Chapaev is not Furman, and not Butterfly. The actor increasingly focused on folklore, on jokes about Vasily Ivanovich.

The performance "Everything Passes" with Nikonenko’s participation also went on with a full house. There was always a moment of excitement and creativity in this performance, and the audience did not remain indifferent. In addition, Sergey Nikonenko also has several unreprise performances with which he constantly traveled around the country.

In his debut year in the movie, Sergei Nikonenko starred in two films at once: in the role of Grisha Topilin in the melodrama based on the play of the same name by Sofronov by directors Vladimir Dovgan and Ivan Kobzev “The Heart Does Not Forgive” and then in the film “Life First”. The actor’s further work in Gerasimov’s film “People and Animals” conveyed the intense inner work of the mind and soul of the young actor. He was able to intelligibly convey the physiological need for the truth, harmony and naturalness of his hero and the world.

As the established film actor Sergei Nikonenko first attracted attention in the film novel Azarov "It happened in the police." There he played, although a small role, but, as they say, noticeable. It was this early work that, in essence, became the beginning of the acting biography of the future great actor.

After such luck, he was constantly invited to the cinema. Sergey Nikonenko became one of the most removed actors. At the shooting of Alexander Mitte in the school film novel "Calling, open the door!" Nikonenko was already recognized as a professional. However, if the role of the pioneer leader Petya didn’t happen in his acting fate, he probably would not have entrusted him with the role of Sasha Reutov’s editor Sergei Gerasimov in his Journalism, which is so important for director’s thought. And here the role of Reutov was specially intended for Nikonenko, Gerasimov and in the script gave this hero some features, habits, and manners of the actor himself.

The actor professionally, fully sought to reveal the originality of the national character of his heroes in the films "Strange People", "Red Square".

After the main role of Sergei Yesenin himself in the film by Gennady Shpalikov and Sergei Urusevsky "Sing a song, a poet," the great poet simply entered the life of the actor. It was then that the idea of ​​creating a museum in memory of Sergei Yesenin arose. Nikonenko for a long time could not find the address of the house associated with the life of the poet. I rummaged through piles of old house books in local ZhEKs and found - Sivtsev Vrazhek, 44/14. Bah! Why, the actor himself was born and still lives in this house - some kind of mysticism! So Sergey Nikonenko began to work as the curator of the museum, and his guide, enthusiastically telling visitors about the fate of his famous namesake.

Roles rained down on Sergey Nikonenko as from a cornucopia. The actor, one by one, created diverse images, skillfully showed his characters from an unexpected point of view. Zhenya in the adventure of Boris Grigoriev "Marble House". Tolya Solonitsyn in the film “Beyond the Horizon” in partnership with Vsevolod Sanaev.

Having filmed in one picture, the actor immediately rushed to other shootings. The fascinating love story of the collective farm harvester Stepan Kalashnikov for his own wife Lydia, the brilliantly played role of Lydia Fedoseyeva-Shukshina, in the comedy Tryn-grass, where Nikonenko acted as an actor and director and scriptwriter! Or the cheerful life of the distant sailor Zhukov in the adventure "Waves of the Black Sea".

Or Nikonenkovsky quiet Yakov in the melodrama "An Unfinished Piece for a Mechanical Piano" by the ingenious Nikita Mikhalkov, who assembled a brilliant acting ensemble, in which the "solo number" has independent meaning, but is interpreted as part of the whole: Sergey Nikonenko, Alexander Kalyagin, Elena Solovey, Oleg Tabakov , Pavel Kadochnikov and Nikita Mikhalkov himself.

How Nikonenko’s heroes are not alike in the film The Walking in Pain, the role of the ingenuous Semyon, or the wise Ivan, dad of first-grader Kirill in the children's comedy Fantasies of Vesnukhin Valery Kharchenko, or the amused police chief in the musical The Dream Is Frantic.

Sergei Nikonenko was inherently a comedian. Yes, and he himself loved comedies, especially such as "Christmas trees-sticks" according to the stories of Vasily Shukshin. The actor and by nature a cheerful person: to hang out, tell jokes - don’t feed bread, that's why he played the role of Nikolai Nikolaevich, a mechanic for TV repair, whose imagination was wow ... how rich!

Sergei Nikonenko had a chance to play with the ingenious Pyotr Todorovsky. In his retro drama "Anchor, Another Anchor", the great director entrusted the secondary roles to magnificent eminent actors - Nikonenko, Ilyina, Yakovleva. It was they who revealed on the screen the whole diversity of the generation of winners.

Also, Sergey Nikonenko created memorable roles in the military film "Angels of Death", the fearless Rodimtsev, and in the melodrama "The Master and Margarita", this is the cunning Styopa Likhodeev, and Nikolai Vasilyevich Gorsky in the criminal story "Classic", and Arseniy Myshko in the "Chinese Service" .

Sergey Nikonenko has never been in a creative idle time. He starred a lot and willingly, did not neglect small roles, if there was no script that could captivate him as a director. With a special feeling of the Wgik brotherhood, the actor starred in future directors in their thesis.

For the first time Nikonenko appeared in the series in the role of Viktor Alekseevich Gordeev or simply “Kolobok” in the famous “Kamenskaya” with Elena Yakovleva and immediately the actor liked the series directors. And away we go! “Impossible green eyes” and “One love of my soul”, “Pan or disappeared” followed by “Guys from our city”, “Heavy sand” and “Homeland is waiting”, “Count Krestovsky” and the role of General Rennenkampf in Doom empire. "

Then, according to the actor, he also had quite good roles: Daev in the series Indirect Evidence, Nikita Komov in the historical film Pushkin. The Last Duel, Susel in the fantasy Hunter, Ivanov, theater director in the melodrama You Are Not leave me "and the captain-gunner in the military film" Leningrad ".

It is in the relentless search for the eternal cause that the source of that internal energy consists, which forces Sergey Nikonenko to search for new ways for himself all the time. When there were no good roles, he worked a lot on the stage, reading Pushkin, Yesenin, Zoshchenko, Mayakovsky. When a lot of his own ideas had accumulated and his decision got stronger, he returned to VGIK, but already to the directing department. Today, he has directed more than a dozen paintings in his direction: “Birds over the City,” “Family Man,” “Brunette for 30 Kopeks,” “I Want Your Husband,” “I Want to America,” “I Don't Want to Marry.”

Of course, not all films were welcomed by critics, not all were successful, but some of Nikonenko’s directorial works aroused interest and won recognition: “Tryn-grass”, “Dawns Kiss”, “Gypsy Happiness”, “I Love. I Wait. Lena.” , "Alien Ship", "Christmas tree sticks."

Actor Sergei Nikonenko always keeps himself in shape. According to him, "nature gave" a good exchange of things to him, as the "popular woman Yaga" Georgy Millar said. In the mornings, he strictly exercises, nine years ago quit smoking, but he “likes” to drink. But, fortunately, does not suffer from a hangover syndrome.

One more fact of the actor’s biography is striking - he lives on Sivtsevo Vrazhek for more than 65 years, that is, from birth. The actor simply actively settled his communal apartment in the center of Moscow - that is, he resettled the neighbors. For his communal apartment, Sergey Nikonenko once gave away two apartments - one and two bedroom. He built one in a cooperative, the other belonged to his wife’s parents. So all the former neighbors now live separately.

The wise actor also managed to slowly adapt to a new life. I even like that you can make good money, buy a good car, but a lot of things can be done in this regard. It is only necessary not to lose heart, not to be angry and to work a little for yourself!