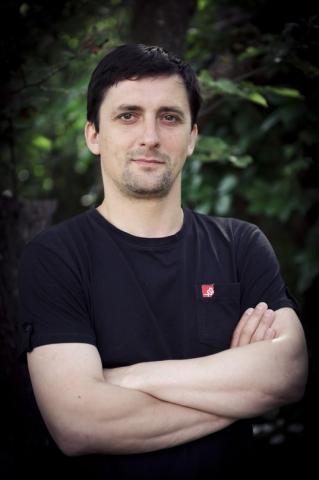 Andrey Smelov’s childhood passed in Kazakhstan. In his youth, he was seriously involved in sports - football, hockey - and did not even think of going to the actors. The spirit of rivalry, the idea that it is embarrassing to lose, that he can do something better - all these qualities are from Andrei from there, from his childhood sports.

The decision to associate himself with acting was already at the end of school. The young man arrived in St. Petersburg and entered the St. Petersburg State Academy of Theater Arts for the course of Professor A.S. Shvedersky.

After graduating in 2002, Andrei Smelov was accepted into the troupe of Our Theater. Very soon, he became one of its leading actors. In 2004, Smelov was awarded the prestigious Golden Spotlight Award in the nomination for “Best Acting Ensemble” (together with R. Yakushov) for playing the role of Mr. Zero in the play “The Player”. A year later, the actor was again awarded the "Golden Spotlights", this time together for playing the role of Xanphius in the play "Frogs". Among the other theatrical works of Smelov: Milt Melville in the play “Love”, Ogorodnikov (“My Elder Sister”), Harvey (“All About Eve”).

Being by nationality the most Russian guy, Andrei Smelov has some features of an oriental man. Thanks to this, directors often invite him to the appropriate roles. For the first time, the actor played the debut role on the screen in the crime series directed by Yegor Abrosimov in the Cop Wars. Vakha Khamidovich became his hero - the role is small, essentially episodic, but the director Smelov was remembered, and after a while there was an invitation to the main role in the adventure action movie "The Last Journey of Sinbad."

The film, with its name correlating with famous Arabian tales, actually narrated about the events of today. His hero was a qualified specialist with extensive experience in solving complex problems, nicknamed Sinbad. According to the script, Sinbad was much older than Andrei Smelov, so the make-up artists worked a lot on the appearance of the actor. And yet, the main merit in creating the image belongs, of course, to Andrei himself. He himself admits that it was not difficult for him to transform into an Arab Muslim, since he grew up in Kazakhstan, and this is a very multinational state: “I had friends, Armenians, Georgians, Chechens, and Kazakhs ... All of different religions. And we never paid attention to it (which, incidentally, I wish for our country). I myself am a Christian, but, apparently, I have absorbed some manners and customs since childhood. ”

The film "The Last Journey of Sinbad" was released in 2007, and in 2009 its continuation appeared - "The Return of Sinbad." These paintings brought Andrei Smelov a lot of fans. However, he is not always recognized on the street - he is so very outwardly different in real life from his on-screen character.