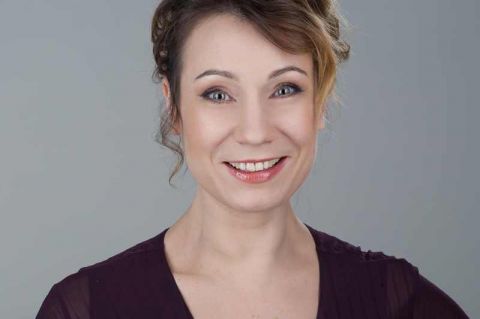 She graduated from the Theater School. B.V. Schukin in 1995 (the course of A. A. Kazan). In the same year, she was accepted into the troupe of the theater. Evg. Vakhtangov.

Olga began acting in films since 1998. In 2007 she was awarded the honorary title of Honored Artist of the Russian Federation.

From an early age, Olga read a lot and was a very curious child. At school, her favorite subjects were literature and the Russian language. In high school, the girl was even trusted to lead these subjects. Olga also liked history and the English language (that is, she was, in fact, a humanitarian).

Another passion of Olga Tumaikina was the scene. The girl was seriously interested in the history of the theater (she was especially attracted to the Moscow Art Theater named after Chekhov) and dreamed of becoming an actress in the future, so after leaving school she went to the capital to storm the theater universities.

In the family, the daughter's choice was somewhat surprised, since on the female side everyone was connected with trade. Mom devoted many years to this area, leading various stores. The elder brother Vasily graduated from the institute and became an economist. In a word, no one had any relation to the acting profession, however, they did not begin to dissuade Olga.

Olga Tumaikina did not grow together with the Moscow Art Theater School in the first round. When the girl entered the audition, the selection committee (in whose ranks was Oleg Tabakov) was already pretty tired. Olga was asked what she prepared. “Chekhov, Tsvetaeva, Garcia Lorca, Dostoevsky,” she replied. “Well, read Chekhov to us,” they said, and imposingly leaned back. And then the girl, deciding to misbehave, began to read the Tsvetaevsky text. Her progress was not appreciated and said goodbye. But in the Shchukin school, the applicant was evaluated and accepted.

Theater School. Shchukina Olga Tumaykina graduated in 1995. In the same year she was accepted into the troupe of the theater. Vakhtangov. Yesterday’s student’s debut was a success - she remarkably played the role of Adelma in Princess Turandot, the cult performance of Vakhtangov’s.

Over time, Olga Tumaykina became one of the leading theater actresses, whose role is a characteristic heroine. In her asset: Polina Andreevna in Chekhov's “The Seagull”, pharmacist Kashkina in the play “Last Summer in Chulimsk” according to Vampilov, the bustling fool Pronya Prokopovna in the sparkling comedy “For Two Hares,” the robber in “Ali Baba and the Forty Thieves,” Mademoiselle Georges in the play "Frederick, or the Boulevard of Crimes", Clarice in the fairy tale "The Deer King" and other roles. The actress brilliantly played the role of the drunk colonel Sofia Petrovna Farpukhina in the play "Uncle's Dream" by Dostoevsky. Olga Tumaykina recalls: “When I entered“ Uncle's Dream ”, people who did not know me even came to my dressing room to check if I was really drunk. It turned out - not drunk! (Laughs.) Just to convincingly play a drunk, you need to pretend that you are absolutely sober. " In addition to working in the Theater. Olga Tumaikina Vakhtangova also played in other theaters.

The popularity of Olga Tumaykina came with the release in 2006 on the television screens of the sketch show "Women's League". The program was made on the English analogue of “Smack the Pony”, but taking into account the peculiarities of Russian humor and our realities. In the first season, together with Olga Tumaykina, the project was attended by: Evgenia Kregzhde, Anna Antonova and Anna Ardova. From the second season, Olga Medynich replaced Yevgeny Kregzhde.