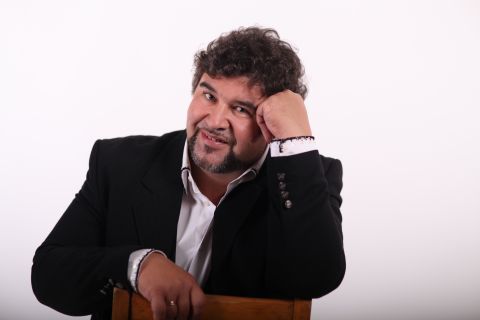 He was born on October 22, 1968 in the city of Kiselevsk, Kemerovo region.

In 1989 he entered the music faculty of the Irkutsk Pedagogical Institute (button accordion class), where under the influence of the teacher N.F. Vasilyeva began to seriously engage in vocals. In 1989-92 he worked in the choir of the Irkutsk Musical Theater.

In 1997 he graduated from the P. I. Tchaikovsky Moscow State Conservatory (class of Eugene Kibkalo) and in the same year became a diploma winner at the II International S.V. Rakhmaninov Competition.

In 1996 he was accepted into the troupe of the Moscow Academic Musical Theater named after K. S. Stanislavsky and Vl. I. Nemirovich-Danchenko.

In 2002, he was invited to the Bolshoi Theater to sing the part of Golitsyn in the premiere performances of the opera Khovanshchina (director Yuri Alexandrov) and the Calaf part at the premiere of Turandot (director Francesca Zambello).

In 2003 he was accepted into the opera company of the Bolshoi Theater.

In 1999-2001 participated in the concert program of the Moselle festival (Trier, Saabrucken); performed the part of Lensky at the festival "Week of Russian Culture" in Cannes; Almerik's part at the KlangBogen festival in Vienna (Iolanta, conductor Vladimir Fedoseyev).

In 2003, he performed at the Samara Spring festival, performing the part of Jose in the opera Carmen by J. Bizet.

In 2004, he performed the part of Radames in the premiere performances of Aida at the Estonian National Opera (conductor Arvo Volmer, co-production of the Estonia Theater and the Opera and Music Theater in Malmö).

In 2005, he participated in the concert performance of the opera Fingal by O. Kozlovsky, held in the Great Hall of the Moscow Conservatory (conductor Alexander Rudin), sang Eric's part in the play The Flying Dutchman of the Latvian National Opera, Samson's part in the concert performance of the opera Samson and Delilah ”by C. Saint-Saens in the National Opera“ Estonia ”(conductor Arvo Volmer), in the new production of“ Boris Godunov ”by the Paris National Opera (Opera Bastille) performed the role of the Imposter (conductor Alexander Vedernikov, director Francesca Zambello), tivala in Savonlinna sang Samson and Radames.

In 2006, he performed the part of Jose at the Savonlinna Festival and Herman at the Estonia Theater, and also performed at the Pajaislis Music Festival (Lithuania).

In 2007, he performed the role of Sergei (“Lady Macbeth of Mtsensk County”) in a performance of the Latvian National Opera (conductor Martins Ozolins, director Andrejs агagars) on a tour in Italy (Catania, Massimo Theater).

In 2008, he sang the part of Rudolph (Bohemia) in Vilnius (Lithuanian State Symphony Orchestra, conductor Gintaras Rinkevičius), performed the “Song of the Earth” by G. Mahler in the Petersburg Philharmonic (conductor Nikolai Alekseev).

Performs with concert programs. Participated in the Tver Musical Seasons (2003), the concert project of the Russian National Orchestra Unknown Glinka (2004, Tchaikovsky State Concert Hall), in the Baltic Seasons in Kaliningrad (2005) , in the festival of Russian culture in Bulgaria, (2008).