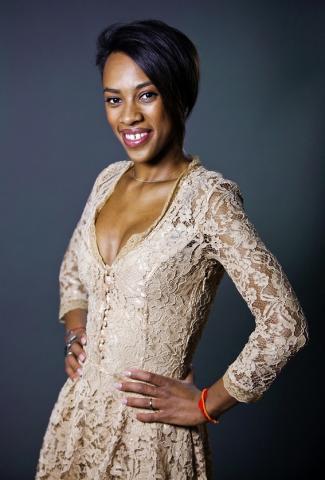 It has Mexican (paternal) and Russian (maternal) roots.

In 2009, she graduated from the acting department of the Moscow Art Theater School (course of K. Raikin).

Since 2007, she began playing at the Satyricon Theater. Konstantin Raikin at one time found a play specifically for Elizabeth Martinez and Gregory Siyatvinda - at that time they were the only black actors in all of Moscow playing in the repertoire theater. It was a play by Bernard Shaw “Pygmalion”, in the comedy “London Show”, put on this work, she played Eliza Doolittle, and Gregory - her father. "This is my main and favorite role," said the actress.

Among other works in the theater "Satyricon": Maid - "Balsam"; Feona - “Not all cats are Pancake week”; Jester - "King Lear"; thieves' den - "Money"; Kassandra - “Vanya and Sonya and Masha and Nail”; Vika Malakhova - “All Shades of Blue”; Karasyonok - "Once Upon a Time in the Village ..."; Susie, the eighth waitress - “Kitchen”; "Little tragedies of Pushkin."

Collaborated with the Moscow Art Theater: Juliet - “Mephisto” based on the novel by K. Mann (dir. A. Shapiro).

Since 2010, she has acted in films, making her debut in the film "All for the Better." Next was the romantic comedy “Caramel” (Anastasia Ivanova) and the film “Loafers” (Angela), based on the early songs of Viktor Tsoi.