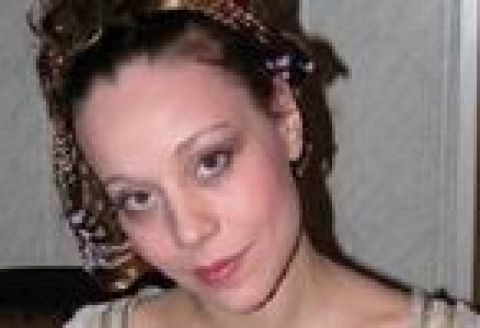 Anna Dubrovskaya was born in the family of an actress of the Operetta Theater and designer and inventor. The girl was seven years old when her parents divorced. However, her father continued to take care of her and her older sister Ilona. Since Anna’s mother was an operetta actress, the girl knew firsthand what the world of theater was. She recalls: “From an early age I was in the theater. I still remember by heart all the operettas from beginning to end ... I was worried about my mother and proud of her. Other children sit and watch, and my mother plays Chamomile or the Evil Queen on stage. Together we studied the text. ”

At first, Anya grew up as a shy and reserved girl. Her main hobby was music, which gradually helped her to become free. Anya herself composed and sang her own songs, which later even began to be transmitted on Minsk Radio. The girl achieved no less success in sports. She became a master of sports in figure skating. But the main dream of Ani was the theater ...

Upon graduation, Anna submitted documents to the Minsk Theater and Art Institute. But here she was disappointed - the girl was not allowed even before the first round, advising her to go on guides or teachers. But Anya did not give up and went to Moscow.

The capital turned out to be more hospitable for Anna than her native city. The girl from the first attempt entered the Shchykinsky Theater School on the course of Vladimir Ivanov. Dubrovskaya recalls her teacher with warmth and gratitude: “The fact that I met him is the biggest luck in my life. I can develop when they believe in me, otherwise even what I can, I’ll lose. Someone reveals, proving and overcoming. I am not a fighter in this sense. Vladimir Ivanov is a man who has become both a father and a teacher to me. ”

In 1994, Anna Dubrovskaya graduated from the Schukin School. Her thesis was “The Royal Hunt” by Leonid Zorin, directed by Vladimir Ivanov, where Anna played the rebellious and passionate Elizabeth. After graduation, Anna Dubrovskaya was accepted into the troupe of the theater. Evg. Bantanga. Anya was invited to both the Mayakovsky Theater and Lenkom, but she was sure that her future was connected with the Vakhtangov Theater. Moreover, already in the fourth year she was introduced to the main role in the most important Vakhtangov performance - “Princess Turandot”. After such a successful start in the work of Anna Dubrovskaya came a black streak. Four years she was not given new roles, and the actress had to prove that she is capable of more. And she proved! Her Desdemona at Othello was highly regarded by professionals. It’s no joke - just two theatrical awards “The Seagull” and “Triumph”!

After that, her repertoire included: Alkmena in Amfitrion, Stepanida in Varvara, Zinaida Afanasyevna in Uncle's Dream, Elizabeth in The Tsarist Hunt, Galya in the play For Two Hares and many other roles.

In addition, Anna Dubrovskaya played in the performances “Kitchen” and “Woe from Wit” in “Theater Partnership 814”; plays in entreprise performances "Romeo and Juliet", "Love Potion", "Planet" and "Iphigenia Avlide" Theater Center on Strastnoy.

For the first time, Anya got on the set as early as 6 years old. Then the film “Between A and B” was shot on Belarusian television and she was invited to the episodic role of a first grader. The second debut of Anna, now as an adult actress, took place in 1992. As a second year student, she played Oksana in Sergei Nikonenko’s comedy “I Want Your Husband”, written by Mikhail Zadornov. After that, the roles in the films followed: “I Want to America”, “House on the Stone”, “House”, the television series “Countess de Monsoro” and others.

One of the works in the cinema almost turned into a tragedy. Anna was to play the main character in the film by Sergei Bodrov Jr. Together with the film crew, she was in the Karmadon Gorge and left from there just a day before the tragic event to play Desdemona in the play “Othello”. In 2004, Anna played the unusual role of the vampire Larisa in the fantastic blockbuster Night Watch. This work was unexpectedly very difficult. Anna Dubrovskaya recalls: “I still wonder how I stood it. Firstly, the shooting took place on the roofs of high-rise Moscow houses, where, as it turned out, black and white vampires should walk around. Well, acting on the roofs of skyscrapers is not for the faint of heart. Secondly, not only did my makeup last about two and a half hours, but they also made me a terrible sticker depicting a face burn. And for all this to look authentic, a special cast of the face was required ... It is very difficult to endure such a procedure: it is impossible to even move, they leave no eyes or mouth, only nose tubes stick out so that you can breathe ... So, in addition to everything else and claustrophobia! In general, you can imagine what I suffered while this cast was taken from me and while these scenes were shot! ”

Among the latest works of the actress are roles in the paintings: “Butterfly Kiss”, “There would be no happiness ...”, the series “My Fair Nanny”, etc.

Anna Dubrovskaya met her future husband, a Romanian named Tudor, when she was still in theater. Since then they are together. Spouses bring up daughter Nina.