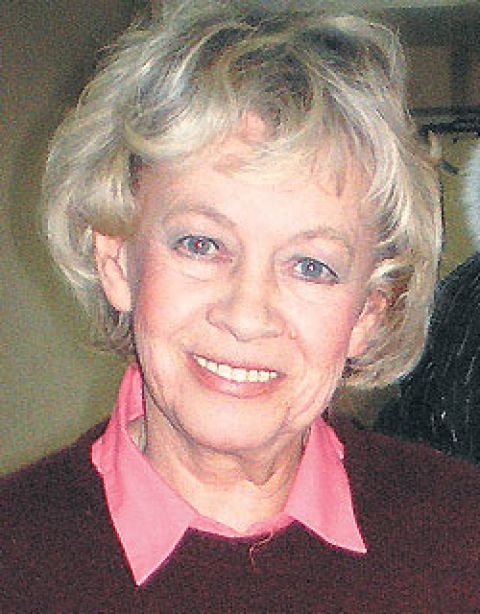 People's Artist of the Russian Federation (2001).

Grandmother of the "beautiful nanny"

For many viewers, the actress Alexandra Nazarova is known for her role of Nadezhda Mikhailovna, Victoria’s grandmother, in the comic series “My Fair Nanny”. For the older generation of viewers, she was remembered for the roles of Nadia Bragina in the film "And if this is love?" (1961) and Ira Yegorova in the film "Beloved" (1965).

Alexandra Ivanovna Nazarova was born on July 17, 1940 in Leningrad. Her parents are actors. Father, Ivan Nazarov, began his acting career in the Yaroslavl Theater. Volkova, and her mother, Alexandra Matveeva, in 1935 graduated from the Leningrad Institute of Performing Arts (workshop of S. A. Gerasimov). Peter Aleinikov, Georgy Zhzhenov, Ivan Kuznetsov and Stepan Krylov also studied at this course. Parents played in the Leningrad New Theater, which was later renamed the Lensovet Theater. Together they starred in the films “Teacher” and “Member of the Government”.

Before the war, my father, along with the theater, went on a tour to Vladivostok. When the war began, then mother, along with little Sasha, managed to leave Leningrad before his blockade. Parents roamed the country with a theater. Victory was met in Nizhny Tagil. This day was remembered for a lifetime.

Sasha’s childhood passed behind the scenes of the theater. At the age of 6, Alexandra played the role of Nora’s daughter in the play “Nora” by Ibsen and the boy in the play “Death of the Dragon”.

During the summer holidays, Alexandra toured the country with her parents and the theater. She usually started the school year in different cities.

Parents were opposed to her daughter becoming an actress. But while they toured, Alexandra entered the Leningrad Theater Institute. Ostrovsky on the course of Boris Zone.

In 1961, Alexandra Nazarova graduated from the Theater Institute and immediately became an actress of the Central Children's Theater. She played the roles of Svetlana in The Golden Heart, Cats of Flora in the play The Abduction of Bulbs, Moti in The Lone Sail Whitens, Rita Slyshchenko in They and Us (directed by A. Efros), etc.

In 1965, Efros moved to the theater. Lenin Komsomol, many actors who played in his performances also went to other theaters. Alexandra Nazarova at this point grew out of the roles of girls and boys. She wanted to play more serious roles, and she came to audition for them. Ermolova. And since then, for forty years, Alexander Nazarov has been faithful to his theater. Here, she immediately began to play different roles, among them were the roles of children: Helen Keller in “The Miracle Worker”, Kostya in the “Moonlight Sonata”, Juliet in the “Thieves' Ball”, doctor Tanya “Tomorrow at Seven” (based on Simonov’s novel Living and the dead. ”) In the play “Theory of Incredibility”, her character was Austrian Katarina, who died in the Spanish War.

The theatrical works of Alexandra Nazarova were noticed not only by critics, but also by famous people. Victor Astafyev conveyed her gratitude and admiration for the role of Carol in the play “Time and the Conway Family”. This performance was recorded on tape and repeatedly shown on television. Actors Yuri Volkov, Ivetta Kiseleva, Evgenia Uralova and others played in it.

In the movie, Alexander began acting immediately after graduating from a theater school. The role of Nadia Bragin was not the main one in the film “And if it is love?” (1961), but it was her heroine who appears in the first frames of the film - Nadia answers the German lesson. Alexandra herself taught French at the school and institute, and taught German phrases on the set. Future popular actors of domestic cinema were shot in this film: Evgeny Zharikov, Andrey Mironov, Zhanna Prokhorenko and others.

The next big role was the role of high school graduate Ira Yegorova in the film "Beloved" (1965). This film is about the first steps in the adult life of yesterday’s graduates. The heroine just graduated from school, wanted to go to college, but a meeting with a young builder brought her to a construction site. The straightforwardness and conscientious attitude of the girl to work does not always coincide with the views of the leadership. Conflicts begin, followed by quarrels with a loved one. Alexandra Nazarova's partner in this film was a young actor Vitaly Solomin.

The actress calls her favorite role the role of Sophia in the film "Sophia Perovskaya" (1967). Perovskaya was a member of the Narodnaya Volya committee; in 1881 she was executed for organizing the assassination of Emperor Alexander II. Konstantin Simonov really liked the historical film, and he thanked Alexander in a letter for playing the role of Sofia Perovskaya.

After the birth of Mitya’s son, Alexander Nazarov fell out of sight of the cinema for several years, but continued to play in the theater: Albina in the play “White Summer”, a role in the comedy “As an Exception”.

Since the late 70s, she again began to act in films. In the film “Crew” (1979), she played a small role, her character is a passenger of an emergency flight, who is looking for her son, Dima, before boarding the plane. The despair and horror that mother experiences in this terrible moment is conveyed to all viewers.

Since the late 70s, she again began to act in films. In the film “Crew” (1979), she played a small role, her character is a passenger of an emergency flight, who is looking for her son, Dima, before boarding the plane. The despair and horror that mother experiences in this terrible moment is conveyed to all viewers.

Alexandra Ivanovna also worked on dubbing foreign films and series. Her voice is spoken by children in films and heroes of animated series. The actress duplicated the role of a boy in the French film "Toy" (with Pierre Richard), Casper in the cartoon "Casper", a duckling in the series "Duck Tales", etc.

When domestic cinema began to shoot series, then Alexandra Ivanovna was one of the first to respond to new multi-part films. She played the role of a teacher in "Little Things in Life", Rosa Markovna in "Thief" and "Thief-2. Happiness for hire. " But the most popular among the audience was the role of Nadezhda Mikhailovna, grandmother of Vika Prutkovskaya in the comic series “My Fair Nanny”. This series is loved by both adults and children. The actress was recognized on the street and thanked for the role of Baba Nadi.

Over time, more and more often her heroines become grandmothers. But the grandmothers performed by Alexandra Ivanovna are different women. In “My Fair Nanny,” Nadezhda Mikhailovna, the eccentric and forgetful lady; Vano’s grandmother in The Secret Sign, a tired and sick woman, violinist Olya’s grandmother in the TV series Brigade, intelligent and kind. And a completely different grandmother in the film Farewell, Dr. Freud, is Anna Pavlovna, a modern lady who is interested in psychoanalysis. In the series “Taxi Driver” (2004), Alexandra Ivanovna played the role of Marisana Bychkova, the mother of an adult unmarried son. Her heroine wants her son to marry and is terribly afraid of this.

The oldest actress of the Theater. Ermolova

Alexandra Ivanovna plays on the stage of the theater. Ermolova for forty years (since June 29, 1965). In the 90s, the significant roles of the actress were the performances of Tango by Mrozhek and Caligula Camus. In Tango, the actress played the eccentric grandmother Eugene. In Caligula, the Hunchback. "Caligula" was directed by Zhitinkin. The main role was played by Alexander Baluev.

Since 1995, Alexandra Ivanovna plays Anna Kennedy in the play "Mary Stuart." This is a historical play about the confrontation of two women claiming the royal throne of England. Anna Kennedy was not only the nurse of Mary, but also her adviser. She supported Mary Stuart in the last minutes of her life.

Since 2001, on the stage of the theater. Ermolova is in the play Good Night, Mom. In this performance, two play - Mom and Daughter. Alexandra Ivanovna plays mother, and her daughter Jess is actress Olga Matushkina. A daughter wants to commit suicide one evening. Mother is trying to dissuade her. An evening conversation reveals the secrets of mother and daughter.

Currently, the repertoire of the actress has three performances. She plays Dashkova in the comedy farce "Great Catherine", as well as in the performances of "Good night, Mom" ​​and "Mary Stuart".

New roles in the films "Traders" (Yanina Ivanovna) and "Love adventures" (the role of Maman). On the television screen, we will see Alexander Nazarov in the series "Ataman", where the actress plays Semenovna, a resident of the village, working in the police. The shooting of the new season of the series "My Fair Nanny" continues.

In 2001, Alexandra Ivanovna Nazarova was awarded the title of “People’s Artist of the Russian Federation”. We hope that the new roles in the cinema and theater of this wonderful actress will be as vivid and memorable as all the previous ones.