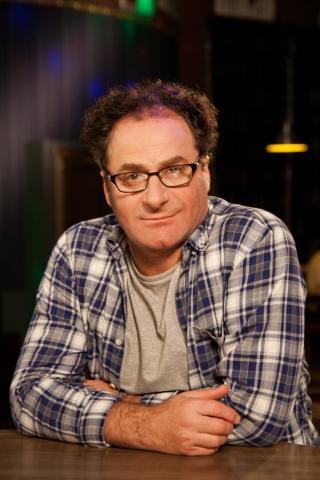 Semyon Strugachev was born near Khabarovsk in 1957, in the Smidovichi station of the Jewish Autonomous Region. He grew up without a father, who left his wife and four children. Then they moved to Birobidzhan, where Semyon was brought up in a boarding school. “... We lived poorly, but happily, because childhood is childhood. I do not like it when they complain: "Well, we experienced this and that in childhood." No, I was happy. "

At school, Semyon Strugachev played amateur performances, sang well, for which he was even called the "Birobidzhan nightingale." He squinted under Robertino Loretti, it was very fashionable, one to one turned out. But in adolescence, the voice underwent significant changes due to the so-called “breaking”, and the “Birobidzhan nightingale” ceased to be so.

When the Mikhoels Theater, which was directed by Mira Moiseevna Shimenko, broke up, many actors came to Birobidzhan.

They were not allowed to create a professional troupe, and they began to engage in folk theater. In this theater, our hero began to play. At the age of 16, he played in Ostrovsky's play "Our People - Let's Count".

They played the world repertoire, and Semyon decided to stay in the theater - such an easy profession, after the performance everyone laughs, drinks, smokes ... “They started pouring me in the ninth grade, I started smoking right then. Thought - bohemia, adult life! How did I know that this is very hard work. "

The story of the transfer of Semyon Strugachev to the Lensovet Theater (then still the city of Leningrad) is slightly unusual - Igor Petrovich Vladimirov, the head of the Lensovet Theater, invited Semyon twice. In 1984, the actor came to help at the screening of one actress. He was then 27 years old. Vladimirov noticed Semyon, invited and said - in 10 days to be in the theater. But there were difficulties with registration, and our hero went to change his apartment. This process lasted for six months. Six months later, calling Vladimirov and saying to the receiver: “Ready!”, He answered: “I don’t remember. Show yourself again.” Then Semyon understood - not fate. However, the second time, three years later, during a tour of the Kuibyshev Theater in Leningrad, Semyon Strugachev again liked Igor Vladimirov, but he immediately received an invitation to the troupe of the Lensovet Theater, where he still works today. The actors here were very well received, given several major roles. Semen’s debut was the play “Love to the Sepulcher,” which until now, since 1988, has been in the theater with full houses.

It was after this debut that actor Semyon Strugachev noticed. Even during the intermission of the play “Love to the grave,” the audience whispered: “This actor, the performer of the role of Bruno, would have to act in films! There would be a second Louis de Funes! ”

By the way, it was Louis de Funes who was the real idol of the actor, at one time Semyon was in love with him and even imitated him somewhat. Also, foreign idols, comedians were Charlie Chaplin and Pierre Richard, and of our tragicomics he was very fond of Lebedev, Ilyinsky, Evstigneev, Leonov. “These actors could give odds to foreign comedians. In general, we have good artists. There were, are and will be. The country gives birth to talented people, ”the actor is convinced.

His teacher, for example, considers Andrei Alexandrovich Prysyazhnyuk, People's Artist of the Soviet Union, Vladivostok idol. According to Semyon himself, he took a lot from him.

Semyon Strugachev has an amazing talent that literally bewitches the audience, and the audience, together with the actor, are going through all the ups and downs of the production. In the theater they say: “Yes, if Senya is on stage, the evening will be calm, you can relax. None of the spectators will budge, no walks in the hall during the performance, all as if hypnotized ...”

Semyon Strugachev is an avid fisherman, and in “Features of National Fishing” he had to stop shooting because of the bite ... As soon as he was released from the frame, he immediately grabbed the fishing rod. But, as luck would have it, the nibble begins - and here they shout: “Strugachev, into the frame! Strugachev, in the frame! " Rogozhkin also loves fishing, he understood Semyon and never scolded him. Sometimes I got close. Once Semyon was lucky. He pulled out a big, big bream. But Rogozhkin’s nothing! “God, you had to see his face! Fishing envy is a terrible thing! Maybe that's why he hasn’t been shooting me lately? It’s my fault! There was no need to drag a big fish! ”

As if the glued image of Leo Soloveitchik initially pursued Semyon Strugachev relentlessly. But Semyon wanted to reveal himself in other images, but the directors turned away from the actor precisely because of the popularity of Lev Soloveitchik. “I suffered a lot because of this. Alexei German was offered me the role, and he says: "A good artist, but how will I take it? They will immediately say that Leva Soloveitchik is removed from German."

In the theater, Semyon Strugachev corresponds to the character of the comedian. But one director took and destroyed it. Semyon played a very tragic role - Franz Kafka in “Trap”. Vladimirov proposed to the Polish director for this role another artist. He looked and said: "This artist will play Kafka" (pointing to Semyon). They say to him: "This is a comedian." And he replies: "This is you - a comedian, and I will have - a tragedian." And the performance took place. “The one who did not see me in comedy could not imagine that I could be a comedian - for me it was the best praise,” says Semyon.

Ten years later, “Features ...” Semyon Strugachev again, quite consciously and purposefully, went beyond the role prepared by nature - in the new film by Vladimir Bortko “The Master and Margarita”, he appears in the role of Jesus' associate, Levi Matthew, one of the four evangelists who carefully records every word of the Master. As Bulgakov, Yeshua says: “One man follows me and lies from himself ...”

On samples for this film, make-up artists very poorly, especially not trying, made up Semyon, in his own opinion, thinking that he still would not be approved. We tried the first scene, it went well. At the director’s insistence, the make-up was qualitatively corrected, but there were many applicants, and therefore for two weeks the actor went to Lenfilm and everything was listed in the applicants. When the last hope was lost, it suddenly became clear that it was Semyon Strugachev who was approved. Bortko explained this: they say, an unexpected move, for many it will be a surprise. Filming of scenes with the participation of Semyon took place in Sudak and in Bulgaria - the Americans filmed something about Christ there, and the scenery was “inherited” by ours. Acting for Semen was interesting, but also difficult in the physical sense. According to the plot, the actor wears Yeshua, played by Sergey Bezrukov, in his arms; Semyon had quite serious health problems, but the operation on his collarbone hadn’t been done yet, when he carried it, his bones cracked. But Semyon firmly decided for himself that Levi Matthew should play, and then he should be treated. As a result, after the end of filming, I had to do three operations in Germany. After The Master and Margarita, they began to offer him serious roles, but the actor is not going to refuse fools. "I'm not shy about being stupid and funny: the actor must be different and be able to play everything."

Along with the role of Levi Matthew in changing the image of Semyon, “roles” took part in the series “Heavenly Life” and “Faith, Hope, Love”. In the film "Heavenly Life" he plays an Israeli pilot who was shot down over the Sahara desert, but remained alive - a rather serious, soulful movie. This is a fascinating and dramatic story about eternal love and trampled friendship, about heroism and betrayal.

But from theatrical productions, Semyon Strugachev himself draws our attention to the play “The Magician from Lublin”, where he plays the main role. The role of Yasha Mazur, magician, magician and hypnotist is a peculiar embodiment of the eternal image of Don Juan. The most complex role, dramatic, ambiguous. The actor had in a short time to master the real tricks that people take years to complete. Professionals worked with Semyon, for example, Anatoly Sudarchikov, People's Artist of Russia. “But you can focus on the stage, but you can’t do this in life. Yasha allowed himself and ended up in a dead end, from which there is only one way out - to conscience, to God, ”Semen philosophically argues.

Semyon Strugachev is a very versatile person - he plays 8 (!) Musical instruments, even writes music for performances.