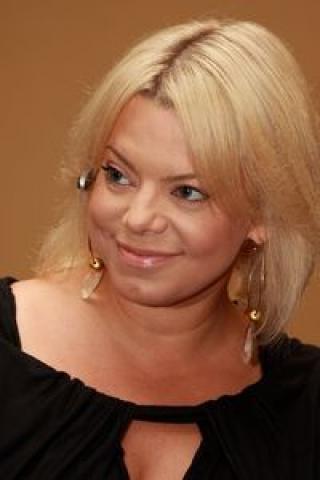 Laureate of the USSR State Prize (1978, for his role in the film "About Little Red Riding Hood").

Yana grew up in a communal apartment on the Garden Ring. At school, it was known as a terrible, just a monstrous hooligan. I was only with the boys. There was such a friendly trinity of “notorious” - Glazer, Ponizovsky and think tank - Poplavskaya. When they were expelled from school for yet another disgrace, they went to the Forum cinema, ate donuts and were very happy about their freedom from school.

The girl’s personality was noticed in early childhood. On the set, Yana Poplavskaya was for the first time at 4 years old with her mother-actress. Then Rolan Bykov became interested in her first, he asked: “Will you act in films?” The categorical “no” sounded. The debut did not take place, and another girl played in the picture.

Then six-year-old Yana was offered the role of a boy in the film "Remember your name." But again, by, firstly, “I don’t want a boy, just a girl”, and secondly, an episode was cut during the editing, even though the director Kolosov agreed to the female role. When the little actress did not see herself at the premiere, she cried for a very long time.

And at the age of ten, Yana made her debut on the theater stage - at the Taganka Theater, where her mother worked. Yuriy Lyubimov himself noticed Poplavskaya Jr. and determined her role in the play “Crossroads” about the war.

After some time, Yana Poplavskaya starred in one of the first issues of Jumble. And then in the television film “Fantasies Vesnukhina” played one of the main roles, such a nasty girl-girl Masha Lukova with bows .... In general, the cinematic biography of Yana Poplavskaya began with this picture.

The girls at school didn’t like Yana at all, they offended, they teased with a “crocodile” and a “frog”. Clearly - children's envy. “There was such a girl in the classroom Kristina,” recalls Yana, “a special ulcer that said, though with envy:“ Do you know why they take off Poplavskaya? Because it’s hard to even find a more terrible face. ” Yana kept saying that she had very big eyes and a huge mouth, and she really wanted to be a pretty girl with a doll face. The wise mother consoled: “The better you work, the less people will notice your appearance. After all, they are getting used to both beauty and ugliness. ”

Yana Poplavskaya was not just a gifted child. She was a fantastically freed child. Director Nechaev was looking for about a year the heroine for the role of Little Red Riding Hood. And wherever he turned, they advised him everywhere: “There is Yana Poplavskaya. Try to take it off. This is an innate Little Red Riding Hood. " At first, however, after watching amateur photographs, Nechaev refused to even just see the girl. But time passed, the search continued, and everyone still advised Poplavskaya. Finally, he agreed. “Nechaev sat on a chair and began to look at me. I started reading “About the Horton Elephant,” which hatched eggs, ”recalls Yana. The result of her reading was as follows: they seized her in her arms and began to circle, and Nechaev sighed: “Finally, I found you! I’ll only shoot her! ”

The young actress was very lucky! She starred with such actors as Vladimir Basov, Rolan Bykov, Rina Zelenaya, Nikolai Trofimov. Basov, who played The Thin Wolf, despite his on-screen appearance, was so wonderful and attentive that next to him the girl felt like an adult actress. He always joked so elegantly, kissed her hands. When they brought iron tanks with dinner, he asked: "What does the lady want to eat?" A very young actress loved Bykova, another negative character in the film is a hunter. He was always there, helping and did not leave the site, even when there were not his scenes.

The tale "About Little Red Riding Hood" is one of the first children's philosophical films. It was surprisingly organically combined a fun game and serious thoughts, which ensured great audience success. Little girl Yana, having played a major role, fascinated the whole country and became extremely popular. After this role, Poplavskaya was recognized on the streets and asked for an autograph.