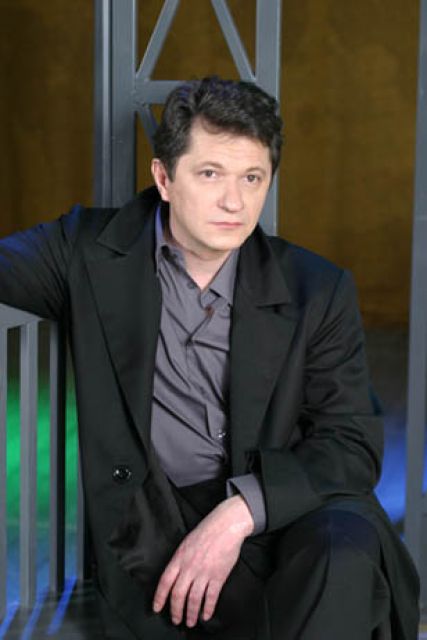 Honored Artist of the Russian Federation (1992).

Andrei Ilyin was born in the city of Gorky, now Nizhny Novgorod. His parents had nothing to do with the theater. My father worked all his life as a driver, and my mother was a supply manager at a vocational school. Andrei recalls: “When I was little, I really enjoyed driving with his father in his car. I loved cigarette smoke, the smell of gasoline, I liked the smell of his smoked and salted jacket. I know that dad loved me very much, and felt this love. "

At school Andrei studied well - he was a solid good guy. His favorite subject was literature, mathematics, biology, and geography were also given quite well ... In the same school, the boy began to study in the drama club, and in the fifth grade he enrolled in the Sormovsky Palace of Pioneers.

What future awaited a boy from a working-class family? As Andrei Ilyin admits, he could become a trucker or a locksmith, at best an engineer. However, after finishing the eighth grade, the boy decided to drastically change his fate and entered the Gorky Theater School on the course of B. Narovtsevich ...

Andrei graduated from college in 1979, when he was 18 years old. The young man was assigned to the Riga Russian Drama Theater, where the leader was Arkady Katz. The young actor came to the court - he was immediately introduced to roles in children's performances.

At the Riga Theater, Andrei Ilyin quickly matured, gained experience, and soon he was entrusted with playing Khlestakov in The Inspector General. Then there were Treplev in The Seagull, A.P. Chekhov (1985), Alexei Ivanovich in The Player, F.M. Dostoevsky (1987) and, finally, Hamlet in the great work of Shakespeare ...

In parallel, Andrei Ilyin in 1983 graduated from the acting department of the Riga Conservatory.

Andrei Ilyin began acting in films since 1980. However, for more than ten years, his name did not say much to the mass viewer, since the actor got mostly small roles in little-known films of the Riga film studio. Andrei Ilyin played his first major film role only in 1989 in the satirical comedy “Constellation Kozlotur”, where his partners were the famous Armen Dzhigarkhanyan and Semyon Farada. But this film was not a massive success.

In 1989, Andrei Ilyin moved from the Riga Russian Drama Theater to the Theater. Moscow City Council. Here he played roles in the performances: “My poor Marat” (Leonidik), “Dear friend” (Charles Forestier), “How important it is to be serious” (Algernon).

However, with the beginning of the 90s, difficult times began in the country. Economic disruption affected both the theater and cinema. Andrei Ilyin recalls: “There was a feeling of complete collapse. The spectator left the theaters, the movie wasn’t filmed, there was no talk about the series, because “Isauru” and “Wild Rose” were shown on TV. I rushed around Moscow in search of earnings and seriously thought about what to tie with acting. Because I'm a man, and I had to somehow drag the family, think about loved ones. And the theater then did not give an opportunity to survive. The salary was 10-15 bucks a month, below any living wage. "

At that time, there were changes in his personal life - Andrei broke up with his first wife. In order to pay for the apartment, which he rented, Andrei had to earn extra money by cab.

As for his work in the cinema, for the first half of the 90s we can only note the role of Sergeant Serebryany in the picture of Pyotr Todorovsky “Ankor, More Ankor!”. Despite the fact that the role was small, it was remembered by the audience, and this was his first real success in the cinema.

And the actor brought fame to the retro drama of the same Peter “What a wonderful game” (1995), where he played Felix Raevsky - a touching bespectacled student at VGIK of Stalin's time. In this wonderful picture he had the first time to play together with Elena Yakovleva, who played the role of a pregnant commandant. Then no one could have imagined that these two actors would meet again in five years and make up one of the most “star pairs” of domestic TV shows.

Andrei Ilyin recalls his work with Pyotr Todorovsky: “How does he work with the masters? .. He, of course, is an outstanding director and an absolutely amazing person with a fantastic biography. Pyotr Yefimovich is not very similar to the director, he is a very earthly, loving and understanding actor breed, since the actor himself is also by nature. He always very accurately and clearly gives instructions to the actors. This is a man with absolute hearing for the truth. And for me he is also a very big, amusing child, because, fortunately, he has not lost his childhood perception of life. During the filming, Pyotr Todorovsky eagerly goes to the most unexpected proposals. In a word, I am happy that my fate touched this director. ”

By the end of the 90s, the situation in the country gradually began to improve, and at the same time in the life of our hero. In 1999, Ilyin was invited to the role of Lesha Chistyakov - the husband of Anastasia Kamenskaya (Elena Yakovleva), the main character of the series "Kamenskaya". In fact, the role was small. The main characters of the series were operas investigating crimes, the roles of which were played by Elena Yakovleva, Sergey Nikonenko, Sergey Garmash and Dmitry Nagiyev. However, it was this role that the work brought Ilyin real acting fame.

The sequels followed - Kamenskaya-2, Kamenskaya-3, Kamenskaya-4 ... Gradually, the character of Lesha Chistyakova became more and more significant, more vividly written out. Shy, intelligent, loving his wife, able to cook wonderful meat with dried apricots ... And this is not all Chistyakov's advantages. An interesting image, multiplied by the talent of the actor - such a character was simply doomed to the love of the audience (especially the female half). So soon, Andrei Ilyin even began to enter the ratings of dozens of the most coveted husbands of Russia.

In life, Andrei Ilyin is somewhat similar to his hero. He is no less shy and also loves his wife, swimming coach Olga. As for culinary skills, Ilyin admits: “I can also fry fried eggs and sausage if necessary, but I prefer that a woman do this. Fortunately, my wife has enough time to cope with household chores. I often think up how to diversify our life. This duty, in my opinion, lies with the man. We must not get tired of doing creative work in a relationship - in the end, serve a cup of coffee when my wife reads in an armchair, present flowers without any reason. These are the little things that do not give the routine to absorb some kind of romance, which is necessarily present in the relationship of man and woman. ”

In 2000, Andrei Ilyin was accepted into the troupe of the Art Theater. Currently, he plays in the theater. Moscow City Council, Moscow Art Theater Chekhov, the theater agency "Art Partner XXI", LA ’THEATER.

Among the roles of the actor: Porfiry Petrovich - “Crime and Punishment” by F.M. Dostoevsky, Louis the Great - “The Cabal of the Sanctuary” by Mikhail Bulgakov, Dr. Harvester - “The Holy Fire” by S. Moem (all the Moscow Art Theater named after A.P. Chekhov); Ivan Karamazov - “Case No. ...” by F.M. Dostoevsky, Alberto de Stefano - “The Man and the Gentleman” by E. De Filippo (both - La 'Theater); Peter Ananiev - “Witch” by A.P. Chekhov (Theater Agency "Art Partner XXI").

Since 2000, Andrei Ilyin has become very popular in domestic cinema. Moreover, the actor is often invited to a variety of roles. So in the "Turetsky March" he played a thief-recidivist, holder of the thieves' box office, creepy and unprincipled. In Alexander Mitta’s film “Swan Paradise” - a metallurgical tycoon overwhelmed by the damned fateful love with which he is obsessed with his own wife. In the series of Mikhail Shevchuk "Satisfaction" - Prince Golitsyn.

In the 8-episode film by Leonid Kvinikhidze, “Manor,” Ilyin happened to play a hitman, but a hitman not quite ordinary. Here is how the actor himself describes him: “This is such a lop-eared, eccentric killer who knows his job perfectly, but is absolutely illiterate. He once read a primer, and he liked it so much! "Mom washed Roma, mom washed the frame." He then comes to the book market and asks: “And you have no continuation?” They say to him: “Yes,“ Native speech ”for the second grade.” He: "Oh, come on, otherwise there is nothing native left around."

The stage in his creative career, Andrei Ilyin, considers work in the series "Red Chapel", which was released in 2004. The actor played the role of a real historical character - the Soviet intelligence agent, the Polish Jew Leopold Trepper, who worked in the 30s and 40s under the pseudonym Jean Gilbert. At one time he was called the scout number one of the twentieth century.

Andrei Ilyin says: “I had a rather complicated relationship with my hero. Before filming, I looked at some photos: Trepper turned out to be a short man of rather dense build, with characteristic Jewish features. So the portrait resemblance had to be abandoned. "I was only slightly aged, added gray hair, a mustache stuck - in general, they gave seriousness to my frivolous look."

It was not easy with the filming, which lasted five months. The actor had to abandon his performances, an entrepreneur. The shooting, a significant part of which took place in Riga, took all the time.

The result is a very high-quality, interesting and intellectual picture. Although in terms of format it refers to the series, it has nothing to do with the usual “soap”.