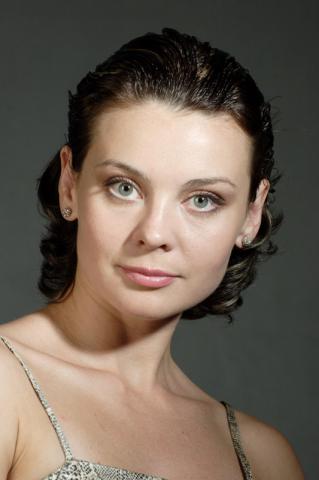 Born September 12, 1974 in St. Petersburg.
In 1993, she graduated from the Pedagogical School with a degree in primary school teacher, but did not work in her specialty. The next two years (1993-1995), she studied at the vocal department of the Music Hall school-studio, after which - in 1995 - she entered the St. Petersburg State Academy of Theater Arts for a course of professors of the Honored Art Worker of Russia A.N. Kunitsyna and G.A. Barysheva.

The theater for Julia Rudina began with the role of Eliza Dullittle, played in her third year in the student production of “My Fair Lady” (based on the play by Bernard Shaw). The musical was staged on the stage of the Musical Comedy Theater and was a great success with the audience. This was followed by the legendary role of Juliet in the famous Shakespeare tragedy, which viewers could also see in Musical Comedy. The brilliant work of the young actress was appreciated by specialists, as a result of which she was offered a job in the capital, but Julia chose to stay in St. Petersburg. And she was not mistaken in her choice ...

In 1999, Yuri Rudin joined the troupe of the famous Alexandrinsky Theater. Over the years, she was engaged in performances on his stage in the performances: Pygmalion, Masquerade (Nina), Marriage, For Every Wise Man Pretty Simplicity, Little Tragedies. In addition, the actress played in theatrical performances: "Comedian's Shelter" ("Dad! My poor dad!"), "Behind the Black River" ("Love and the journey of Ensign Grinev") and the Youth Theater ("Pollyanna"). For the role in the play "Polianna" Julia Rudina was awarded in 2000 the independent acting prize. Archer.

The actress played her first major role in the detective-mystical series directed by Dmitry Tyurin, "Solo for a Pistol and Orchestra." In the film, her heroine Yulia Nikolaevna Shumova, together with operative Mitya, investigates the circumstances of the death of her husband. In the same year, Julia Rudina starred in one of the main roles - Angelica - in the action-packed series “The Fighter. Birth of a legend ”, the action of which takes place in the dashing 90s in the“ fighting ”city of Rostov ...

In the following 2009-2011, Julia Rudina played many notable roles in the movie. Among her heroines are: Anna, the daughter of commandos Dedova in the thriller “The Ostadnik”, lawyer Elvira Pavlovna Khimich in the series “State Defense”, Svetlana Ryabinina in the crime film “Find Me”, Larisa in the detective series “Defense of Krasin - 3”, Dr. Emma Pavlovna in the series "Cop Wars-5."

Julia Rudina admits that she loves her job. He loves both the stage and the set. “I am very pleased when the audience, adults and children, come up after the performance and sincerely thank. It costs a lot, ”says the actress.

In addition to filming a movie, Julia Rudina is engaged in dubbing films. Her voice is spoken by the heroines of the animated films “Finding Nemo” and “The Incredibles”, the famous drama “Casino Royale”, the series “Desperate Housewives”, the Hollywood films “Crazy Races” and “Shopaholic”, as well as many other paintings.