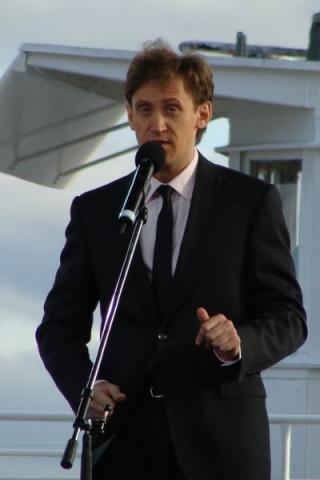 Born on September 14, 1969 in the city of Dnepropetrovsk, Dnipropetrovsk region of the Ukrainian SSR.

At the age of three, he moved with his parents to Omsk. In 1986 he graduated from school No. 11 in the city of Omsk and entered the Omsk Institute of Railway Engineers at the Faculty of Automation and Telemechanics. In 1988, he was drafted into the ranks of the Soviet Army, served in the tank forces in the city of Bikin as a "mechanic - driver." In 1989, according to the order of the Minister of Defense D.T. Yazov, with the rest of the students he was transferred to the reserve to continue his studies.

In 1990, he played for the OVIIIT KVN team and brought it to the city finals. In 1992 he graduated from the Omsk Institute of Railway Engineers. At the same time he graduated from acting school-studio with a degree in actor.

After the distribution, he taught electrical engineering at the railway lyceum of the city of Omsk.

At the end of 1993 he was accepted as a DJ on the Europa Plus Omsk radio. In the same year, Sergey Anatolyevich organized the BIS pop miniature theater, which soon became the most popular in the city and received a lot of prizes at student festivals in Omsk and Tomsk.

In 1996, the first solo concert of Sergei Drobotenko took place in the Palace of Culture "Star" in Omsk.

In 1998, he moved from Omsk to Moscow, making his debut on the Moscow stage of the hall “Russia” in the program “Ah, anecdote, anecdote”. Later he became a screenwriter and participant in this program on the TV Center channel.

In 1999 he became a laureate (third place) of the International Competition of Satire and Humor Artists in Moscow. In 2005, he spent two benefit nights “Both Laughter and Sin” at the Central Concert Hall “Russia”.

Since 2005 - participant and presenter of the festival of satire and humor in Jurmala.
The author of almost a hundred pop monologues, interludes. Among the most famous: “Rush Hour”, “No, you are strange!”, “Dedication to your beloved mother-in-law”, “Haru Mamburu”, “One day in the life of a bachelor”, “Tam-Taran”, “Our joy (meeting in a minibus ) ".

He also wrote a number of pop works for Efim Shifrin, Vladimir Vinokur, Jan Arlazorov, Elena Stepanenko and others.