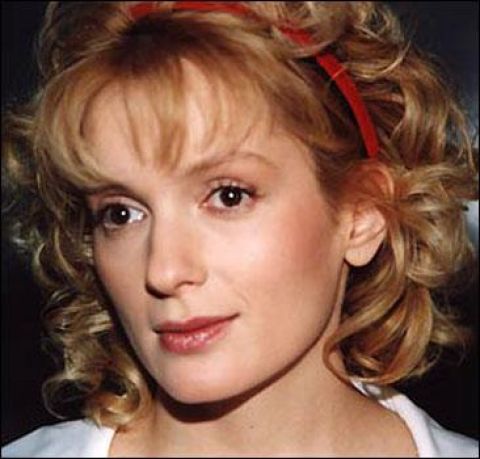 From childhood, in the family of Masha often gathered guests - actors.

Apparently already then she began to take shape the dream of becoming an actress.

Maria Poroshina was born in a musical family. Her mother Natalya Krasnoyarskaya studied on the course of Boris Alexandrovich Pokrovsky - director of the Bolshoi Theater. But then, having lost her voice during the operation, she became an opera director. Dad Mikhail Poroshin sang in the ensemble "Birch". The opera singer was Maria’s grandmother. Soon, Mary's parents divorced. Natalya Krasnoyarskaya married a second time - for actor Dmitry Nazarov. He turned out to be a good stepfather - he got along well with his adopted daughter, checked his lessons, and educated. Masha had little free time.

The girl studied in a French special school and was engaged in dancing at the ensemble "Birch". Remembering that time, she says: "I do not remember a happier time." From childhood, in the family of Masha often gathered guests - actors. Apparently already then she began to take shape the dream of becoming an actress. A cousin of Maria Anna Sazonova says: “... she got up on a chair or climbed onto the stage of the campaign site in the courtyard and announced: '' People's Artist Maria Poroshina performs, '' she read poetry, sang, danced, spoke French ..."

And yet, few believed that Mary would become an actress. She had a class up to 3-4, in her own words, a "prickly character." And then she suddenly became an extremely shy girl. She was afraid to go to the store for bread, because she had to contact the seller. And when she was raised to read a poem in a literature lesson, Masha was shy, stammered, and confused the lines. Only in the circle of relatives and friends did she continue to be bold and relaxed.

Maria began to prepare for admission to the theater institute only by the end of the 10th grade. “Mom and stepfather thought that if I did it myself, then it was mine,” says Maria. “And if not, she should do something else.” Poroshina entered the Moscow Art Theater School on the first try. At the entrance exams, she met Gosha Kutsenko, who at that time was in his third year and was six years older than Masha. Soon they got married, and their daughter Pauline was born. True, by this time Mary had already left the Moscow Art Theater School. After studying there for a year, she moved to the theater school. Schukin, who successfully graduated.

The marriage with Gosha Kutsenko was short-lived. They parted, but maintained a good relationship. Maria Poroshina says: “We lived with him for five years. He is a wonderful person and a talented actor. He gave me a wonderful daughter. Sometimes we film together, and our past relationships do not interfere with work. ”

Masha began her career in cinema with small roles in popular series. So she played the role of Katie in one of the first youthful television series "ABVGD LTD", which with great success went on ORT in 1994. Then there were other minor roles and episodes.

In 1999, Maria Poroshina, who is a brunette, first bleached her hair specifically for the role of Marina in the psychological thriller Nikolai Lebedev's “Fan”. Subsequently, she had to clarify more than once. Today, viewers are generally used to seeing her more often as a blonde than a brunette.

Gradually, the role from the role, Maria Poroshina sought recognition. She starred in the movie "There is no third” (Katya), the series Beauty Salon (Aglaya) and Conference of Maniacs (psychiatrist), played a cameo role in the famous Antikiller, and in the series Brigade she played the role of Tamara, wife Phil. The actress had a chance to play in such popular TV shows as Kamenskaya-2 (Katya Matsur) and Turetsky-3 March (Elena Lebedeva).

In parallel with the filming of the movie, Maria Poroshina played on the stage of the At the Pokrovka Theater with Sergei Artsibashev. Among the roles: Geda in the play "Gedda Gabler", mother - "Poverty is not a vice", Princess - "Shadow", Madeleine - "Man for a Woman" and others. For some time, Maria Poroshina also worked on television - she led the program “Wider Circle”.

However, despite a considerable number of roles, until 2003, Maria Poroshina was not known to a wide audience. The first great success for the actress was the role of Olga Gromova in the TV series "Always Speak Always." The series aroused great interest, especially among women. The heroine Poroshina fell in love with the audience, together with Olga Gromova they cried and laughed, and worried and enjoyed life. But, it could happen that Mary would not play this role.

Maria Poroshina recalls: “I was invited to this film for auditions, which I couldn’t get to, because I starred, rehearsed, and had tours. And I already thought: well, that means not fate. A month has passed. Then again they began to call and say that they had not approved anyone yet. Samples are very difficult, for example, for me. Having read the text right away, you need to quickly figure out what kind of person you are doing, what you want to say with that. One of the scenes of the break with my husband was on the samples, where I cried and asked him to return, I did not understand what was happening. And maybe because of these samples I was approved. And then a very fast shooting period went on, and I no longer understood how everything happened so quickly: the main role, and such a big responsibility. This is my first major role. I was terribly worried and felt a great responsibility. It was difficult and interesting. Character consists of three parts. This is a woman at the beginning of a more prosperous period, she is married, she has love, children. Then the prison situation and the aftermath, suffering. ”

Girl with a funnel

In this picture, Maria got one of the main roles - the girl Svetlana, who, cursing herself, creates an energy funnel. To resolve this situation, they send Mary to seduce her handsome male Ignat. Ironically, this role went to the ex-husband of Maria Gaucher Kutsenko.

After the release of the picture on the screens, one of the most asked questions to the actress was precisely about the relationship on the set with her ex-husband. Maria explains how she managed to look so organically in the frame: “... because we really tried to maintain such a relationship ... how to say? .. Well,“ friendly ”- it's silly to say when we have a common child. But at least I know that Gosh is a wonderful actor, and it's nice to work with him. He is a good partner, an inventor, a visionary. I don’t know, it all unexpectedly happened that he and I played in such scenes ... as if I’d love-unloving, I don’t know what to call them. ” In addition, the actress notes that participation in the filming of her ex-spouse was a surprise, both for her and for Gosha Kutsenko.

The film "Night Watch" has collected the most diverse press - from enthusiastic responses to devastating criticism. Nevertheless, it is undoubtedly a breakthrough in our cinema in terms of quality and organization of filming, level of special effects.

Maria Poroshina met with actor Ilya Drevnov in Lenkom, where she came to see the play. It so happened that their places were nearby. A simple meeting at the beginning did not bode well. But the acquaintance gradually grew into friendship, and then into love.

“There were flowers, courtship,” says Maria. - But the main thing is a look, attitude, word, moment of feeling that this person needs you, that he is experiencing something for you. “Sometimes flowers, gifts even scare me, such attention is abundant in it.”

Currently, Maria Poroshina works in the Theater Company of Sergey Vinogradov. Among her roles: Chloe in the play "Foam of Days", Cecile in "Dangerous Liaisons" and Anais Nin "Venus". In addition, Poroshina plays in the entreprise. So, together with Alexander Baluev and Alexander Feklistov, she plays in the performance of the Amethyst Producer Center - “The Magnificent Man” (the role of Tankred Dorst).

The actress continues to act in films. After the release of Night Watch, interest in Maria Poroshina increased significantly. Now any of her roles attracts the attention of viewers. In 2005, she starred in the role of a plastic surgeon in the TV series of Nikolai Geiko "Cherub" and in the role of Varvara Glushkovskaya in the historical series of Alexander Nazarov "The Talisman of Love." “For the first time I play in a historical costume film, and I like it,” said the actress.