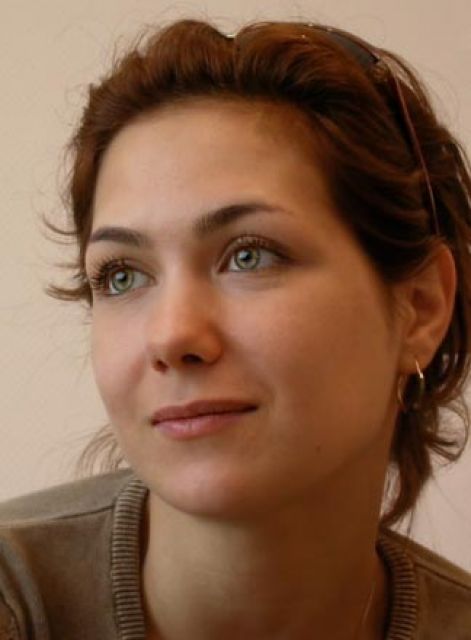 Laureate of the theater prize "Crystal Rose of Victor Rozov" in the category "Actors Under 30" (for the role of Desdemona in the play "Othello").

Catherine was born in Moscow. She tells about her childhood: “Almost all my childhood memories are connected with my older sister Vika. We love each other very much. We are completely different: they fought and put up. She is 4 years older than me. First childhood impressions - from her loves, from her older friends, memories of how she took me for a walk. They went to the camp together, there was just a mafia. The first cigarette was smoked with her in the kitchen. Now both of them have become respectable mothers, we grow up children. "

At school, Catherine did not study very well: "... algebra with geometry and physics is just awful, here I had to pay for exams somewhere, somewhere just good relations with the teacher, somewhere in Latin I wrote on a poster for a good mark. In general. I somehow graduated from grade 11. I still don't like school ... "

The organization of the school oppressed Catherine, but with her classmates she had a wonderful relationship. A bright spot in her childhood memories were trips to the camp. There she took part in various performances with pleasure. Then she had a dream to become an actress.

Catherine entered the acting department of the Shchepkinsky School at the Maly Theater (workshop of N.N. Afonin). She recalls: "... I got so on my Wednesday! In the first year we were forced to portray dogs, cats, plants. Everyone, of course, laughed. If someone looked from the street from the street to the audience, it would seem to him that everyone had gone crazy, but then everything, like children, gets drawn into it, and it becomes interesting - unless, of course, you take it seriously. I understood then - if you laugh at yourself, nothing will work. The Institute is the whole world that makes me formed. "

Catherine's classmates were Peter Krasilov and Maxim Konovalov (Boomer). At graduation, Catherine played a role in the play "Romance". She got an old dress, which was found in the Maly Theater in a terrible state. Catherine completely restored it, sitting above him at night, decorating with lace and beads. This was her first costume role, after 4 years she will become famous in another costume role - in the series "Poor Nastya".

After graduating from the Shchepkinskoye School in 1999, Catherine got a job at the Theater of the Russian Army. The young actress was entrusted with the role of Desdemona in the play "Othello", and she did an excellent job. For this work, Catherine was awarded the "Crystal Rose of Victor Rozov" prize in the category "Actors Under 30".

In addition to Othello, Catherine is also involved in the productions of Avaricious, Much Ado About Nothing, and others. In parallel, she works in the Theater Company of S. Vinogradov, in the theater projects of P. A. Stein (Oscar), plays in the entreprise.

One of the first roles of Catherine in the movie was Raisa in the series "Moscow Windows". Together with her in the series starred Igor Petrenko. They had known each other since college. Catherine studied at a higher rate, although she was one year younger than Igor. But in those years they were just acquaintances ... According to the plot of the heroes, Petrenko and Klimova were connected by a romantic relationship that ended in a wedding. A similar story happened in life. Already on the set, their romance spun. Catherine recalls: “Igor immediately attracted my attention. He is surprisingly calm, it is very difficult to piss him off. He’s also a very kind person and will never refuse help. ” However, at the end of the filming, their romance temporarily ended. The fact is that both Catherine and Igor were not free at that time. “Then something like that moved in my soul, but I did not allow my feelings to develop. Each of us had a family and obligations, ”Igor admits. In the end, they broke up ...

A year passed, and one day the telephone rang Igor. As the actor admits, all this time Katya did not go out of his head, and relations with his wife exhausted themselves. Catherine says: “I did not think that he would call me a year after the end of filming, and when this happened, I realized that I could not live without him. About a month later, we began to live together. ” Soon they both starred in the sequel to "Moscow Windows" - the series "The Best City of the Earth."

The star of Ekaterina Klimova ascended after the release of the TV series "Poor Nastya" on the screens of the country. But before that, in addition to “Moscow Windows” and “The Best City of the Earth”, she managed to star in several more films and series. She played Zhanna D'Albre in the tragicomic phantasmagoria of Karen Shakhnazarov "Poisons or The World History of Poisoning", Inna Gavryushina in the television series "Times Don't Choose" (2001), Katya in the series "Don't Leave Me, Love" (2002).

Director Peter Pete Shtein invited Catherine to test for the series Poor Nastya, where she played in the Oscar. He was the first to call her as soon as it became known that she was approved for the role of Natalia Repnina. According to many, the character of Klimova is one of the most charming heroines of the series. Catherine says: "My heroine Natasha Repnina is a very beautiful, interesting and strong-willed woman. One of the most powerful women in the picture. She always tries to resolve all situations that do not even concern her. Sometimes this leads to not very good results."

"Unfortunately, Princess I am only in the series. In my life I am actress Yekaterina Klimova. My hobby is football. From early childhood, my dad took me to football, where I learned to really" hurt "... When I sit on the podium, I it seems that I'm better than a coach and all athletes know how to play ... "In addition to working in the cinema and theater, Catherine gives lessons at the Children's Model Agency, scenes, speech and mastery of the actor,
works in advertising on radio and television. She knows how to drive a car, engages in horseback riding, dancing, singing, and fencing. She studied French and English.