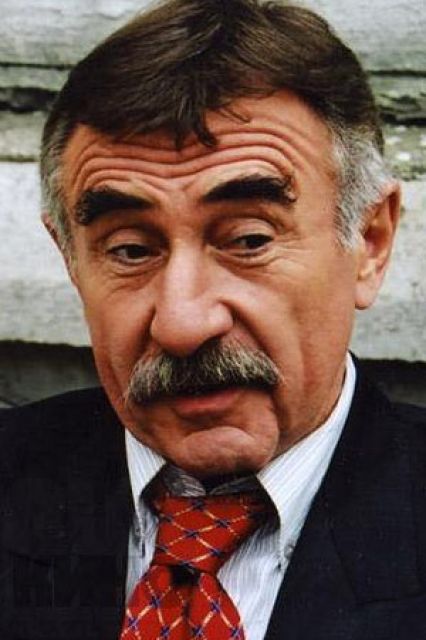 Leonid Kanevsky was born on May 2, 1939 in Kiev. His parents had nothing to do with art. True, my mother studied at the Kiev Conservatory in her youth, but at the age of seventeen she got married and had to say goodbye to the conservatory. My father was a fruit technologist by profession. He loved his profession very much and wanted his son to follow in his footsteps. Young Leonid, however, dreamed of something completely different. From eleven years old he wanted to become an artist. After graduating from school, a seventeen-year-old boy went to conquer Moscow.

To enter the theater was not at all easy. Leonid was not accepted to the Moscow Art Theater School. The Great Masalsky, folding his fingers in a tube and placing it (a tube) in his eye, said: “Not our texture!” The Shchepkinsky School was waiting for the same thing. Once again, the young man heard that he was not suitable for the texture. Luck Kanevsky smiled at the Theater School. B.V. Schukin. He was enrolled in the course of Vera Konstantinovna Lvova. Here he happened to learn from the wonderful teachers of Cecilia Lvovna Mansurova and Vladimir Georgievich Schlesinger. The teacher on the word of art was the famous reader Yakov Mikhailovich Smolensky. Together with Leonid Kanevsky studied: Vasily Livanov, Andrei Mironov, Zinovy ​​Visokovsky and Olga Yakovleva.

At the end of the Shchukin School in 1960, Leonid Kanevsky was accepted into the troupe of the Moscow Theater named after the Lenin Komsomol. In 1967 he moved to the Theater on Malaya Bronnaya.

Leonid Kanevsky made his debut in the cinema in 1965, starring in the fairy tale "City of Masters". And three years later, the sparkling comedy “The Diamond Arm” was released. Kanevsky got a very small, almost episodic role of a smuggler. The beginning actor himself came up with the text, figured out how to beat it all, and the role turned out to be surprisingly funny, memorable. This was his first great success. The actor brought the All-Union fame to the role of Major Tomin in the famous television series “Connoisseurs Conduct Investigation”. The first four films were released in 1971 and immediately provided the main characters with incredible audience love. To some extent, this success was predictable. Detective, famously twisted plot, charming and such dissimilar Znamensky (Georgy Martynyuk), Tomin (Leonid Kanevsky) and Cybrit (Elsa Lezhdey) - this became the key to popularity. But here that the series will drag on for many, many years, hardly anyone expected. For two decades, viewers with unflagging interest followed the regular investigations of connoisseurs.

Connoisseurs also enjoyed no less love from law enforcement agencies. The famous concerts dedicated to the Day of the Police almost never did without their performances. Leonid Kanevsky recalls: “And in general, in the Union there was no city police department that would not invite us to speak. They passed us like a baton. They knew, for example, that I like to steam, and Gerka loves dumplings. The police leaders who met us at the plane’s ramp said: “Semyonitch, the bathhouse is drowning. Yakovlevich, dumplings are boiled. " Great meeting! Of course, it made a living, but it was crazy interesting. Each month - at least two trips. <...> We were a kind of vest in which we could cry out all our troubles and problems. Such a living confessional. And for whom? For the then leadership! ”

The popularity of connoisseurs is evidenced by such a fact. Once in Komsomolsk-on-Amur, a thief in law living in a hotel with artists was detained by police. Upon learning about which neighbors lived next to him, he was incredibly upset that he did not manage to rob them. To the surprised question of the police chief, they say that they, the artists, have nothing to take, he answered: “You do not understand, head. That is not the point. Can you imagine what ringing in the zone went that I knew Znatokov! ”

With such popularity and the duration of the series, Kanevsky did not become an actor of one role. The actor starred a lot and interestingly. In this case, he played mainly characteristic roles. Surprisingly, his major Tomin and even the episode in the film "Spring on the Oder" became the only positive roles in the movie. Kanevsky with his usual ease and grace played all kinds of crooks, thieves, gangsters, hooligans, or simply negative types. Everyone perfectly remembers, for example, his master Bonacieux in the adventure film D’Artagnan and the Three Musketeers (1979). As in "Diamond Hand", again a small, episodic role, and again the success, which became for the actor, by his own admission, "a complete surprise, although very pleasant." Remarkable was his duet with Leonid Yarmolnik in the children's film “Peppy Long Stocking” (1984), where they portrayed two crooks-thieves - Karl and Blon.

The beginning of the 90s. With the collapse of the Soviet Union, theaters and cinema began to decline. Many actors were left without work. Leonid Kanevsky recalls: “At that time, theaters in general were empty. It was a wild sensation, completely unusual. You see, it was not I who was unclaimed, but the work that I served and still serve. At that difficult time, people were not up to performances. Just then, Eugene Arie was running around with the idea of ​​creating a Russian-language theater in Israel, gathered a troupe, and invited me. I knew him well, believed and decided to change my life drastically at fifty. ”

So in 1991 Leonid Kanevsky ended up in Tel Aviv in Israel, becoming, together with Eugene Arie, one of the founders of the Gesher Theater (The Bridge). “At first it was terribly hard ... There were enough difficulties. For example, once we did not receive a salary for four months. Old hardening helped to transfer all this. And then the theater began to develop, gaining momentum. The talent of Zhenya Arie, his enormous energy has borne fruit, ”says Leonid Kanevsky. Very soon, the theater became very popular in Israel, and for actors, including Kanevsky, it became a real home. Here he played a lot of different roles. Favorite performances of Leonid Semenovich are “The Case of Dreyfus”, “Three Sisters”, “Village”, “Slave”, “Shosha”.

There in Israel, Kanevsky proved himself in a new capacity - a leading television program. When the Russian-language television channel opened, he was invited to broadcast "I want to eat everything." Kanevsky agreed to run this program on one condition - if it would not be a copy of Andrei Makarevich's Smak program. As a result, a new interesting program appeared, which is literally watched by the whole country.

But what about the movie? Leonid Kanevsky continued to act in film. Only now the Israeli audience has already enjoyed the talent of the actor. He played in fairly well-known Israeli films: “Late Wedding”, “Electric Man”, “Jewish Revenge” (role - fifty-year-old repatriate Nathan) and others.

Leonid Kanevsky met his future wife Anna in 1967. Anna is the daughter of the famous actor Efim Berezin - the famous Plugs from the Kiev duet “Tarapunka and Plugs”, which for many years shone on the stage of the Soviet Union. Programs for this duet were written by Alexander Kanevsky, Leonid’s elder brother. He then introduced them. And Leonid and Anna got married only eight years later.

Anna is a philologist and translator from English and Polish by profession. In 1977, their daughter Natasha was born. She graduated from the Theater Department of Tel Aviv University. By specialty, Natalia is a theater designer, works on Israeli television.

The revival of "Connoisseurs"

The idea of ​​a revival of the series “Connoisseurs Lead” has been in the air for many years. But it didn’t go beyond conversations. In addition, during this time, the performer of the role of Zinochka Kibrit - Elsa Lezhdy died. Finally, in 2001, Mosfilm decided to start filming. The series was directed by Vladimir Khotinenko.

When Leonid Kanevsky was called from Moscow, he first decided that this was a hoax. He recalls: “I called back, it turned out they were taking off. Soon the script was sent to me, I read it, I realized that a good series could turn out, and agreed. I was very pleased to act here. "I plunged into the old days, when I wandered from one end of the country to the other, from a tour to filming." In the continuation of "Connoisseurs", together with Leonid Kanevsky and Georgy Martynyuk, Alexander Porokhovshchikov, Alexander Filippenko and Vera Vasilyeva starred. The role of the expert, which in the previous series belonged to Elsa Lezhdey, was performed by the young actress Lidia Velezheva.

About his hero, now Colonel Tomin, Leonid Semenovich says: “Of course, everything changes with age. Today he is different. Gray whiskey, and therefore the experience of life is different. Less temperamental, more wise, calm. Tomin became older, or something. Less groovy. It’s doing business with less excitement. ” The character of the series has also changed. His characters - Znamensky and Tomin - became more natural. When creating the first series, the highest authorities strictly ensured that representatives of the Soviet police did not have any flaws. The heroes of the series were practically denied a personal life, they could not take part even in small parties, for example, to drink vodka. In the new series, living people appeared in front of the audience, not refined heroes. At the same time, Khotinenko managed to maintain the spirit of the first series.

The premiere of the new series took place in February 2002. And shortly after its release on the screens, Deputy Minister of Internal Affairs of the Russian Federation Vladimir Vasiliev awarded Leonid Kanevsky and Georgy Martynyuk with the sign "For Assistance to the Russian Ministry of Internal Affairs." According to the deputy minister of the Ministry of Internal Affairs, the film “Experts Conduct Investigation” demonstrates “the image of an intelligent police officer, the most profound professional who respects people and his colleagues.” “We need positive examples, including on the screen,” he emphasized. “Maybe this is just what we are missing right now.”