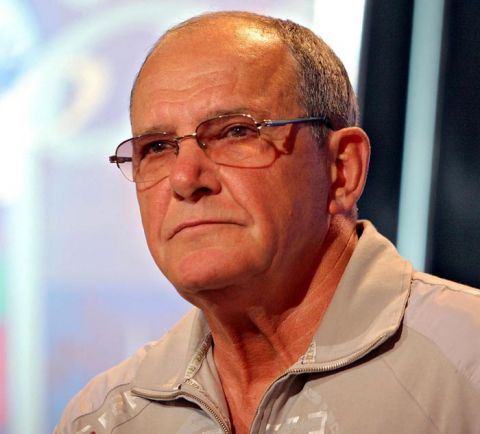 Emanuel Vitorgan was born in Baku. His parents are from Odessa. My father was a major Soviet business executive working in the milling industry. Mom did not work, kept a house, raised a son. Emanuel received an unusual name at the insistence of his mother - in honor of her brother, who was killed during the Civil War during the next pogrom in Odessa.

Fathers were often transferred from object to object. Therefore, Emmanuel graduated from school in Astrakhan. Upon graduation, he went to Leningrad to enter the Leningrad State Institute of Theater, Music and Cinematography.

LGITMiK Emanuel Vitorgan graduated in 1961. By then, Emanuel Vitorgan was already married. His first wife was actress Tamara Rumyantseva, with whom they studied together. In this marriage, his daughter Ksenia was born.

Upon graduation, Vitorgan was admitted to the Pushkin Theater, and two years later (1963) he moved to the Leningrad Drama and Comedy Theater. Somehow, on a skit in the House of Actor, he met Alla Balter, who was an actress of the Lenin Komsomol Theater, and fell in love with her at first sight. In 1967, Georgy Aleksandrovich Tovstonogov invited Vitorgan to Lenkom. And it so happened that Vitorgan was set to play with Alla Balter a couple in love Bernardo and Anita in the play "West Side Story." In those days, the theater community considered them the most beautiful couple of Leningrad. They said: here in Paris there is Alain Delon with Romy Schneider, and we have Vitorgan and Balter.

As the actor himself says: "For the sake of Alla, I left my family. I divorced hard. My wife asked me to get out of St. Petersburg, and I moved to Moscow. I still have a strained relationship with my adult daughter." Vitorgan believes that “this is my biggest sin in my life. And I will be punished for it. And maybe already punished. Because I left the child. But I thought and still think that those parents who are wrong they don’t part because of children. The child feels a lie in the relationship, and this only makes him worse ... "

In 1971, Vitorgan, together with his new wife Alla Balter, moved to Moscow and settled in the Konstantin Stanislavsky Moscow Drama Theater. The couple had a son, Maxim, who later became an actor.

Since 1982, Vitorgan has been an actor in the Taganka Drama and Comedy Theater. And since 1984, Emanuel Vitorgan, together with his wife, moved to the VV Mayakovsky Academic Theater. Nature endowed Emanuel Vitorgan with a flexible, mobile artistic talent and such external data that, it seems, doomed him to the role of noble or treacherous, but only certainly hero-lovers. Emanuel Vitorgan was lucky: he had a chance to work with Georgy Tovstonogov, Andrei Goncharov, Anatoly Vasiliev, Boris Morozov, Joseph Reichelgauz, Leonid Kheifets - directors who figured out the most varied possibilities in the artist, perhaps hidden for some time leading, it happened, very gifted people through noisy successes to internal devastation.

In the movie, Emanuel Vitorgan made his debut in 1962. But initially he starred very rarely and, mainly, in small, episodic roles. So in the film “Two tickets for a day session”, he portrayed the husband of an Estonian Inca, without saying a word of text in the frame. The most prominent in those years was the role in the children's adventure film "Dirk."

Only in 1977 did Vitorgan play a truly significant role in the television movie "And It's All About It" based on a novel by Vily Lipatov. The actor created the image of felon Gleb Zavarzin, a gloomy personality with a complex soul. Vitorgan himself came up with his appearance - a thieves cap, a special saying. After this film, Emanuel Vitorgan became famous.

Directors began to invite Vitorgan more often to shoot films. Initially, the roles most often came across negative - spies, fascists, CIA agents. This was greatly facilitated by the appearance of the actor. As Emanuel Gedeonovich explains: “For some time, the directors thought that the villain should be tall, slender and imposing, and the hero - snub and lop-eared. Writers and playwrights write out villains better than goodies. But to us, actors, their playing is much more interesting. "

For thirty years, Vitogran starred in seven dozen films of the most diverse genres, from musical comedy to psychological drama. He created memorable images in the films "Pious Martha", "Mission in Kabul", "Casket of Mary Medici", "Profession - Investigator", "Wizards" and many others. However, Vitorgan himself believes: "of the more than 70 films that I starred in, I can’t name a single one that was at the level of theatrical work. I mean the quality of drama, directing - no offense to filmmakers will be told." One of Vitorgan’s latest films is the role of Prince Peter Dolgoruky in the television series Poor Nastya.

The family life of Vitorgan and Alla Balter was long and happy. Their love was told stories. This couple could not help but admire. Even their names were perceived as one: Vitorgan - Balter, Balter - Vitorgan. Finding out who led this duet is a futile exercise, because two stars is already a constellation. But on July 14, 2000 grief came to their family - Alla died.

In 2003, the marriage of Emanuel Vitorgan with Irina Mlodik. Vitorgan's new wife - the head of the theater agency - is 17 years younger than her husband. The couple met ten years ago. At one time, Irina Mlodik helped Emmanuel Vitorgan and his son Maxim to release the play "The Shaman from Broadway."

The life of Emanuel Gedeonovich is very eventful. He still plays on the stage of the Mayakovsky Theater, as well as in the performances of the theater "School of Modern Play". He teaches at the East European Film School. On the NTV-Plus channel, he is broadcasting "Conversations about the cinema."

The son of Emanuel Gedeonovich, Maxim Vitorgan, graduated from GITIS. He currently plays at the Chekhov Moscow Art Theater with Oleg Tabakov. He is married to the actress of the Youth Theater Victoria Verberg. They already have two children: daughter Polina and son Daniel.

The fate of his daughter from his first marriage

The first wife of Emanuil Gedeonovich, immediately after the divorce, moved to Petrozavodsk with her daughter. There she entered the troupe of the Russian Drama Theater. They lived not very easily: she was not very in demand in the theater. Her character was not penetrative. The daughter Ksenia at first did not want to connect her life with the theater. She graduated from a vocational school with a degree in secretary-referent. But apparently the genes took their toll. Later, she graduated from the St. Petersburg Institute of Culture, received a diploma from the director of folk theaters. He currently lives on the island of Baalam, works in a local museum and puts on plays with his theater studio "Window".

Ksenia’s personal life did not work out - two marriages broke up, two children remained - the daughter of Alexander (1989) and the son of Nikita (1996).

Until recently, they were not personally acquainted with their eminent grandfather. At the end of 2003, just before the New Year, Ksenia Emanuilovna finally met her father.

She says: "I went to find out about him. One metropolitan magazine published a scandalous article in which my father claimed that his mother did not allow him to meet with me." It is not known how the meeting would end if not for Irina Mlodik. She met Ksenia at the station and brought her and grandchildren to her home. It turned out that he and Vitorgan had twice sued publications publishing lies.

So Emmanuel Vitorgan finally found his daughter and grandchildren. "I am glad that a solid male hand will appear in the education of Alexandra and Nikita, which was so lacking in our family!" - says Ksenia Rumyantseva.