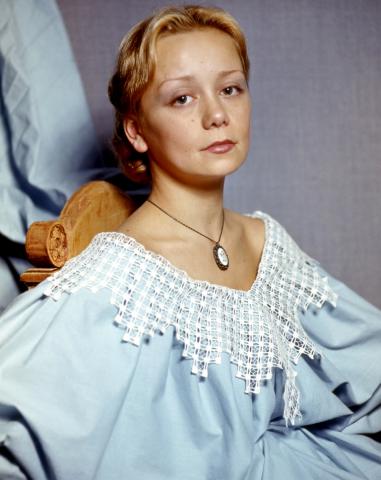 GITIS received only the sixth attempt. In 1986 she graduated from GITIS (course of O.P. Tabakov and A.N. Leontiev).

He plays in performances on the stage of the Moscow Art Theater. A.P. Chekhov.

Once, by chance, Oleg Tabakov himself appeared in the auditorium. Struck by the energy and temperament of Germanova, the famous director took her to his course at GITIS without exams, and after graduation he invited him to work in his theater.

Evdokia Germanova has been serving in the theater of Oleg Tabakov since 1987. The actress calls her audience a “jury trial” and in every performance with her usual stubbornness, breaks through to their feelings.

The first time in a movie, Evdokia Germanova starred before Oleg Tabakov discerned her acting talents. No less famous in the future than Tabakov, and then still a young aspiring director Vladimir Menshov, called the seventeen-year-old girl, who then called herself Dina, to star in his debut film "The Draw". The film received a huge number of awards and glorified actors, most of whom starred in films for the first time in their lives, throughout the country. The most famous of them was Dmitry Kharatyan, a former schoolboy who was before the shootings in the "Draw". By the way, in a remake of the film in 2008, Kharatyan played the father of the main character, and Germanova - the mother of the main character.