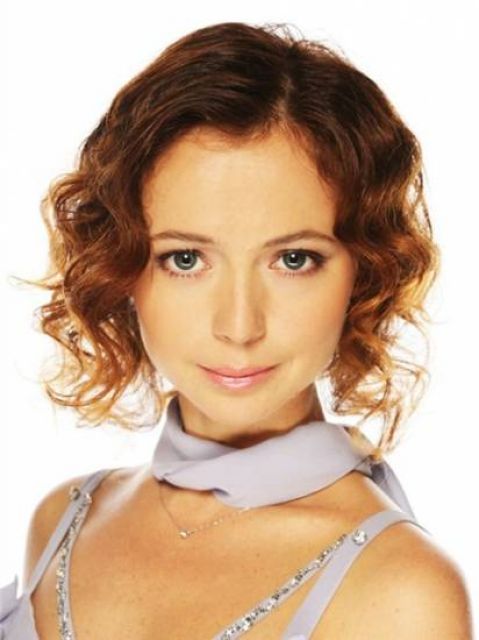 Laureate of the Gatchina Festival Prize for his role in the film "Tartaren from Tarascon".

Lena was born and raised in Moscow. From the age of six, she danced in the pop-choreographic ensemble “Pinocchio” at the Palace of Culture and Arts of the Republic of Kazakhstan at the Tekstilshchiki station. Teachers praised her, promised a good future in dancing. At eight years old, my mother gave Lena a classic
ballet, but there she practiced quite a bit. Ballerinas didn’t come out of her ...

“Now I regret it,” says Elena Zakharova, “but at the age of eight I looked at the skinny girls with outstretched necks and preferred the career of the Great Ballerina: cream cakes. I can endure everything, but not hunger. Even now, before the performance, I am fed up to my fill, because otherwise I will begin to be distracted from the role by all sorts of goodies. ”

Lena dreamed of becoming an actress from childhood. After graduating from the eighth grade, she decided to go to drama school. On the exam, Lena read a fable about a cat. She tried so hard that she even knelt down and meowed. In response, the verdict sounded: "Girl, you better never engage in this profession."

But fate nevertheless turned to face her. At school, everyone knew that Lena, like Assol, was hoping for a miracle: she would be lucky, the most important director would come and call her to act in films. Once classmates decided to play it. They called home, as if from the Gorky film studio and invited to film screenings.

Lena flew to the studio as if on wings and began to wait for the assistant director, because she had no idea that she was joked about. At this time, an assistant director of a fairy tale film passed by. Seeing the girl, he immediately took her to the role of the princess’s girlfriend.

For classmates, it was a blow, but for her a sign - she would still become an actress!

Soon Elena met a student at the Institute of Culture, who persuaded her to enroll in the Shchukin Theater School, prompting how to behave, who to look at and what to say.

When entering the selection committee, of course, they paid attention to the name of the girl. They carefully asked her: “By chance you have nothing to do with ...” “Unfortunately, no,” Elena answered. But this did not stop her from entering the course of Evgeny Simonov.

Already in her second year, Elena Zakharova played Vika - one of the main roles in the lyrical comedy of Alexander Alexandrov, "Shelter of Comedians" (1995).

The actress talks about this film: “... he was remembered for the fact that I starred with Lidia Smirnova, Ivan Okhlobystin and Konstantin Voinov. The shooting took place in the Crimea, but refused to let me go from school. And I called Yalta to Moscow Valentina Petrovna Nikolaenko. She told me: “That's it, I deduct you for not being in class” and hung up the phone. Cruel, but probably true ... She kicked me out, kicked me out, and in my third year I told my parents that I was considered one of the most powerful students of the school. Praise from her was the same as if they had given me an Oscar. "

On the set, the beautiful red-haired Elena was repainted in black. When she returned, she had to repaint herself in her own color.

Quite early, Elena began to play in the theater. And again, everything happened by chance. In 1996, the head group of the Moon Theater under the direction of Sergei Prokhanov saw a girl in the corridors of Shchuki and invited her to audition for the play "The Night is Tender." There were more than fifty pretenders for the role of Rosemary, but Elena was approved.

In 1998, Elena Zakharova graduated from the Schukin School and became an actress of the Moon Theater. In the play "The Journey of Amateurs" she played the role of Lavinia.

In addition to the Moon Theater, Elena plays in other theaters. So in the Theater under the direction of Oleg Tabakov (“Snuff-box”) in the play by A. Ostrovsky’s play “There is enough simplicity for every sage”, she played Mashenka, in the play “Feeling of a beard” in the Kazantsev Center - Marina, in the unprincipled performance of Peter Stein " Hamlet "- to Ophelia.

Elena considers the role of Ophelia to be a big event in her life. Such wonderful actors as Yevgeny Mironov, Irina Kupchenko, Vladimir Etush played with her. “Indeed, it was a wonderful gift to play with such masters,” the actress admits.

However, she also has unpleasant memories connected with this performance: “There is a scene where they bury me, that is, dead Ophelia: they lower me into the grave and fill it up with real earth. Horror! You lie in a cold coffin, they close you with a lid, white light disappears, and only from above: Buh-bang, the earth falls. After rehearsals, I could not fall asleep for a long time, no valerian helped. I thought: "That's what you need, I asked for it myself, now suffer." Gradually got used to it. And once, during the performance, at the very moment when clods of earth fell on me, I could not restrain myself and sneezed :. The guys up there, somehow corrected the situation, in the auditorium no one understood what the "dead woman" sneezed, but since then I have been afraid to laugh at this moment. "

The performance was a great success both in Russia and abroad.

Elena Zakharova says that on the stage she likes to play roles opposite to her in character: “The farther, the more interesting. Positive charm does not mean that the actress is not able to play a characteristic role. For me there is no concept of role. We have long been established: after school, they put on you a cliché of a romantic heroine - and go! I generally do not like any framework and freedom-loving, like all Scorpios. Therefore, when my teacher in the school said to me: “First, Helen, you will play cute girls, and then no less cute old women!”, I was terribly outraged and all four years proved that I was a typical artist - played roles in ancient tragedies, a widow in Chekhov's Medved and other, not at all lyrical roles. And they praised me for them! ”

Until 2000, Elena Zakharova paid more attention to the theater. She rarely acted in films during this period - in the sketch of Roman Khrushch “The Film About You”, Alexander Baranov’s New Year’s comedy “New Year's Story” and others. These works went unnoticed by a wide audience.

The first big success was the series "The Fifth Corner." They began to recognize Elena on the street: “There were cases when I just went into the store and immediately heard:“ Hello, and I look at you on the screen every night. ” I am extremely pleased because it is an absolutely sincere reaction. ”

Then there was a role in the series "Truckers." Here, the actress had to perform rather dangerous tricks: “... I drove behind the cab in the back of a KamAZ truck, between trailers. At first they told me that the car would go at a low speed, and then it accelerated so much that it was rather unpleasant. In addition, a frame was shot where I was standing behind the truck, she had to go to me from the slope, and at the last moment they pulled me out from under it. This is very scary ... And the biggest horror happened when Vlad Galkin (Sashok) was just supposed to knock me to the ground, and he tried so hard that we made a coup through my neck. Someone from the group shouted: “Ambulance!”, And I sobbed. Everyone thought that my neck was probably folded. But God saved me. I remember that only the grass passed through the face with force, and it was all scratched. These are extreme situations. ”

Since 2001, Elena Zakharova has been in great demand in the cinema. She starred in the role of Marie in the comedy Tartarene from Tarascon, for which she received a prize at the Gatchina Film Festival, Louise in the film Lady for the Day, Melissa in Afroviziya, Ksenia in the series Ashes of the Phoenix, Appak in the film Warm Winds ".

In 2006, Elena Zakharova, without any trial, was invited to the series "Cadetism" for the role of Polina Sergeevna, a teacher of aesthetics.

The producers of the series Konstantin Kikichev and Vyacheslav Murugov explained her choice to her this way: "We saw your work in the cinema and theater, we know you, there is no need to arrange samples for you."

Elena was impressed by the way the producers spoke with glitter in their eyes about their project, and she gave her consent. In addition, the actress admits: “... I really liked the story of Max Makarov’s love for Polina and his touching courtship, SMS without signature and silence on the telephone, flowers and even rudeness ... It's interesting to play. I think many viewers recognized themselves in our history during their school years. ”

Currently, Elena Zakharova is not married. About how she sees her chosen one: “He must be a man of courage, sociable, with a good sense of humor. I don’t like daffodils. Self-love, in my opinion, is not a male trait at all! I really like to communicate with bright personalities who are already something "You’ve reached in life. Next to such a person, you also feel interesting, you want to change something in yourself, to strive for something."

At the same time, Elena says that she will not change her surname even in marriage: "Why? I like her! I am pleased to bear such a surname."