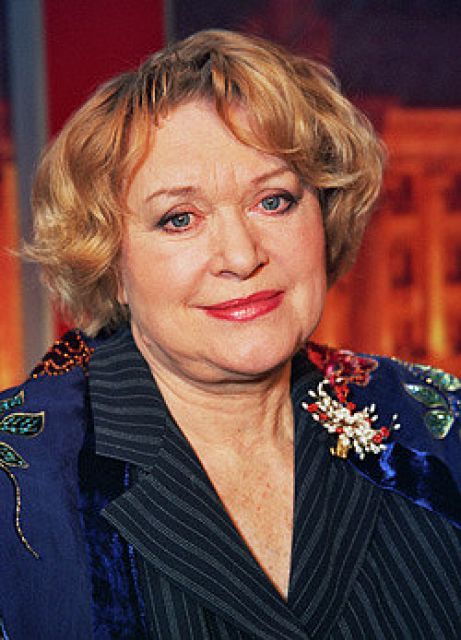 The first years of life of Valentina Talyzina passed in the city of Omsk. In 1940, her father, Illarion Grigorievich, was sent to work in the city of Baranovichi, here the Talizin family met the beginning of the Great Patriotic War. Valentina Illarionovna forever retained memories of the first bombing destroyed by the railway station and kindergarten. Then Talyzin miraculously managed to evacuate: the very next day the Nazis entered Baranavichy, and all the communist families were shot ...
Hatred for the war Valentina Illarionovna carried through her whole life, and this feeling became decisive in its formation: both civil and professional.

Where to go to study?

Since childhood, Valentina Talyzina was fond of history. After leaving school, she firmly intended to enter the Faculty of History. But she never managed to fulfill her dream, and then Valentina went to study at the Omsk Agricultural Institute as an economist. She studied there from 1952 to 1954, and this time was enough for her to understand that the economy is not her path.
As a student at the Agricultural Institute, Valentina Talyzina began studying in a drama studio. The scene so captivated her that in 1954 she left the institute and entered GITIS ...

In 1958, Valentina Talyzina graduated from GITIS and was admitted to the Mossovet Theater. Here she was lucky to learn mastery from the greatest domestic theater actresses: Faina Ranevskaya, Vera Maretskaya, Valentina Serova, Serafima Birman, Varvara Soshalskaya. Valentina Illarionovna still recalls their names with trepidation and gratitude.
With great respect, Valentina Illarionovna always recalls the director of the theater, Yuri Zavadsky, calling him a great director. It was in those years that Valentina Talyzina played brilliant roles in the performances: “Uncle's Dream”, “The Last Victim”, “The Kingdom of the Earth”, “Petersburg Dreams”. After the death of Zavadsky in the theatrical work of Valentina Talyzina, a forced pause arose, and then the actress switched to cinema ...

Cinema. The decade before the “Irony ..."

In the movie, Valentina Talyzina made her debut in 1963 with the role of Inna in the detective "The Man Who Doubts." But the actress began to act actively only in the late 60s. One of Talyzina’s first big successes on the screen was the role of Maria Sukontseva in the adventure film “The Way to Saturn”. The actress was also remembered by the brilliant comedy of Eldar Ryazanov's “Zigzag of Fortune”, where she happened to work with Evgeny Evstigneev and George Burkov. Valentina Illarionovna recalls that at first she was very worried, because Evstigneev by that time was already a real star. But very soon the actors really became friends. The film crew even began to call them in jest "Halfupanov, Firsov and Kharlamov" - by analogy with inseparable hockey players. “We spent all the time together,” says Valentina Illarionovna, “jokes were poisoned, they were telling something, they were showing. I laughed with them from the bottom of my heart and so, I remember, I was happy ... Now I understand: these were the best shootings in my life. ”

Valentina Talyzina’s works such as: Elena Nikolaevna Popova in the comedy “Taimyr Calls You”, the secretary Fedyaev in the legendary “The Old Robbers” came to the end of the 60s and the beginning of the 70s (this is her heroine who profoundly says: “You must retire from 18 to 35 years old ”), chemistry teacher Nina Petrovna in the series“ Big Change ”and others. Among the works of those years, Valentina Illarionovna herself notes the role of Elena Burlakova in Mark Osipyan’s painting “Ivanov Boat”. Filmed according to the story of Boris Vasiliev, he turned out to be objectionable to the authorities and lay on the shelf for 15 years. If he left on time, perhaps the fate of the actress in the movie would have turned out differently ...

"Irony of Fate or Enjoy Your Bath!"

In the film “The Irony of Fate, or Enjoy Your Bath!” Valentina Talyzina together with Leah Akhedzhakova created an incredibly funny duet of two completely opposite friends: a tall, energetic Valya and a small, rustic Tanya. They appeared only a couple of times during the film, but what a positive duet they brought! It should be noted that before “The Irony of Fate ...” and after it, Valentina Talyzina had many bright films in the cinema. Moreover, many of the main roles! And here is a small episode, but what role in the life of the actress he played! To this day, journalists, interviewing Valentina Illarionovna, will not fail to recall this picture.

In “Irony of Fate,” Valentina Talyzina not only played a role, but also “gave” her divine voice to the main character - after all, Barbara Brylski, the performer of the role of Nadi, had a clear Polish accent. For Talyzina, this was the first dubbing experience, and he was very successful. Largely due to her voice acting, the film, as they say, “went.” Unfortunately, then not many appreciated it. Barbara Brylska, for example, received the State Prize for her role, but did not even bother to thank the actress with her who created the image of Nadia. All this led to mutual hostility, which lasted for many years.

Valentina Talyzina and Lilita Ozonina developed completely different relations, which she voiced five years later in the film “A Long Road in the Dunes” directed by Alois Brench. For the Russian actress, the fate of the Latvian woman was unusually close. Valentina Illarionovna recalls: “I won’t say that something pricked my heart, but I remembered how the exiled Latvians came to our Siberian state farm ... How the old woman fell from the truck into the mud because no one gave her her hands .. I was about 10 years old ... Thank God, they weren’t shared with my mom’s room, but the Latvians lived with my friend. I kept asking: "Well, how are they there?" She was angry: “Yes, leave me alone. They will gather in a corner and sit. ” Then one committed suicide, the other, one poisoned, the second, the third ... At the state farm everyone knows about each other ... Then my mother made friends with some Latvian ... Getting up to the console, I told Alois: “You just don’t interfere - I will make a woman who will be loved by the whole Soviet Union. ”

After the release of the film “The Long Road in the Dunes”, Lilita Ozolina went up to Talyzina and said: “In some places you voiced me like I didn’t play.” For Valentina Illarionovna, this was the best praise.

Subsequently, Valentina Talyzina has repeatedly voiced films. Her voice is spoken by the heroines of Eleanor Zubkova in the film "TASS is authorized to declare", Larisa Guzeeva in the film "In that area of ​​heaven." In 2006, Talyzina again “cast her vote” to the heroine Barbara Brylsky - this time in the musical “First Ambulance”.

In the 70s and 80s, Valentina Talyzina actively starred in films. Every year, several films with her participation were released on the screens of the country. The heroines of Talyzina were very different. In the wonderful comedy of George Danelia “Afonya”, the actress played the master of the Housing Office Lyudmila Ivanovna Vostryakova, unsuccessfully trying to appeal to the consciousness of the protagonist; in the film “Faithfully and True”, Talyzina created the image of Aunt Serguni, a noisy street vendor speaking in phrases of a tram conductor, and in the comedy “Evening Maze” she appeared in the guise of a hotel administrator (her famous phrase: “You were, but you left, as you requested "). Remained in the memory of the audience: Queen Yanvary from the film-tale “The Rings of the Almanzor”, Miss Grimble in the science fiction film “Five Seconds Before the Disaster”, matchmaker Fekla Ivanovna in the film adaptation of Gogol’s “Marriage”, the teacher in the pioneer camp Anna Petrovna in the children's film “ Breakfast on the grass ”, provincial actress Anna Petrovna Speshneva in the musical tragicomedy“ Speak a word about a poor hussar, ”police captain Nina Andreevna Tokmakova in the melodrama“ At a Stranger's Party ”and many other roles of Talyzina.

With all the diversity of the heroines of Talyzina, they all had one thing in common - they simply could not be overlooked, they always attracted the attention of the audience. Probably, the point here is that the actress always tried to penetrate the inner world of her character (no matter the main role or episode). She never played “acting experience”, believing that each new role is a leap into the unknown.

One of her most beloved heroines, the actress herself considers Zhenya from the film Sergei Bodrov Sr. "Nonprofessionals" (1985). In this picture, Valentina Illarionovna had to act with ordinary people living in a nursing home. The task itself is not an easy one, and how did Talyzina play! She was very organic, very natural in her role, it seemed that a hidden camera was watching the most ordinary woman ...

Valentina Illarionovna acted in films until the mid-90s, and then, like many actors of her generation, disappeared from the screens. The reasons are the same - the crisis of domestic cinema. The return took place in the new century. At first, the actress starred in the action-packed film “Suspicion” (mother of Andrei Danilov) and the comedy “From the Point of View of an Angel” (Valentina Fedorovna). Then came the roles in the series “Lines of Fate” (Roza Sergeevna) “Healing with Love” (Zinaida Stepanovna). Since that time, the actress has been vying to invite to various films. In an interview, Talyzina admitted: "I am not at the same age to dangle between the theater and the set (now I understand Faina Georgievna!), Resort to a rehearsal every day, and then rush headlong to the studio." And, nevertheless, she again and again pleases admirers of her talent with new works.

One of such striking works was the role of the malicious mother-in-law of Raisa Vitalievna in the series “Urgent in number-2”. Creating this image, the actress did not change herself, trying to understand the essence of her character. She says: “I did not want to play this harmful mother-in-law. She asked me to write another role for me. But the producer of the picture still persuaded, and over time, my heroine even fell in love with me. I tried to make her not as traditionally bitchy as suggested in the script. And then I understood her in many ways. This woman loves her daughter, sincerely rooting for her. Her son-in-law is very beautiful. Try to imagine yourself in the role of mother-in-law Boyko. He is handsome! And sometimes he doesn’t come home for the night. It is clear that his mother-in-law doesn’t like him for this. ”

In addition to working in the cinema, Valentina Illarionovna takes part in the performances of the School of Modern Play theater: Mrs. Leo (Sofya Andreevna) and Event (Antonina Pavlovna). And on the stage, the actress for many years demonstrates her brilliant talent as a reader: in her repertoire, compositions based on the works of Russian poets and prose writers of the Silver Age.

Valentina Talyzina was married once - to the artist Oleg Nepomnyashchiy. In this marriage, the daughter of Ksenia was born. In the future, family life did not work out, and they broke up. Oleg Nepomnyashchy lives in Mexico and is one of the hundred best artists of the country. The daughter, Ksenia Talyzina (Khairova), followed in the footsteps of her mother. She graduated from GITIS and became an actress of the Theater of the Russian Army.