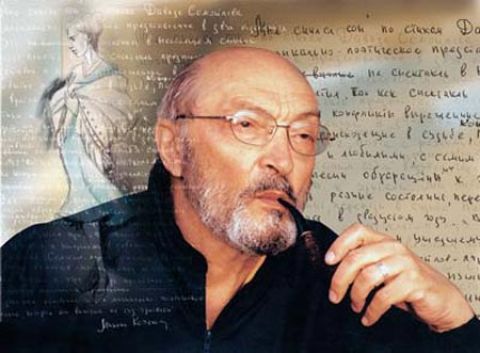 In 1956 he graduated from the Moscow Art Theater School-Studio. This year was unusually happy in the life of a young actor: in the summer, Mikhail Romm's picture “Murder on Dante Street” was released, and in the autumn of the same year, Hamlet’s role in the wonderful Okhlopkov performance at the Theater named after V. Mayakovsky.

In the 1960s, the undoubted successes in the theatrical career of Mikhail Kozakov were Cyrano de Bergerac ("Cyrano de Bergerac" by E. Rostan, directed by O. Efremov, 1964), which he vividly played in the play of the Sovremennik Theater; before that - Kamerger from the tale of E. Schwartz "The Naked King" - a play that in 1960 brought a triumph to the theater, and then turned into a legend; Kistochkin in V. Aksenov’s comedy “Always On Sale” (directed by O. Efremov, 1965), a bright type of intellectual, a native of the 1960s, making a career, a charming cynic who has everything for sale.

In 1970, the actor leaves the Sovremennik. A year after it, the theater left and its founder - Oleg Efremov. Attracted by confidence in Efremov, Kozakov also comes to the Moscow Art Theater. There he played Lord Goring in "The Perfect Husband" by O. Wilde (director V.Ya. Stanitsyn), Gusev in the play "Valentin and Valentina" M. Roshchina (director O. Efremov).

In the Moscow Art Theater, Kozakov begins to stage a play by Leonid Zorin, “The Copper Grandmother,” where the role of A.S. Pushkin rehearsed R. Bykov. The performance is closed, and Kozakov goes to the Theater on Malaya Bronnaya to A. Dunaev and A. Efros.

In the same place, on Malaya Bronnaya, Kozakov staged two performances: the comedy by L. Zorin “Pokrovskie Vorota” and the play by Yu. O`Neil “The Soul of the Poet”.

In 1986 - the role of Polonius in Panfilov’s “Hamlet” in the Lenin Komsomol Theater, later, in the late 1990s, Shadow of his father in the same “Hamlet” of the German director Peter Stein.

According to the recognition of the actor himself, he left when he considered it necessary. He left, having learned something important from his teachers. He has three of them - N. Okhlopkov, O. Efremov and A. Efros. And he studied directing with everyone. There was the main teacher - Oleg Efremov, who was one of his teachers at the Moscow Art Theater School-Studio, the art director of Sovremennik.

The actor actively starred in vivid, dramatic roles, and in films of various genres. But even if he played only one role in the film “Hello, I am your aunt!” (1975), he would already legitimize his name in cinema.

In 1978, he made his debut as a film director, putting on television a two-part film “Nameless Star”, created based on the play by Mikhail Sebastian.

During the years of perestroika, Kozakov left Russia. Successfully realized in the Tel Aviv State Chamber Theater as an actor and director (the role of Trigorin in the Chekhov's “The Seagull” in Hebrew, staging and playing in the “Lover” of Harold Pinter in Hebrew, etc.), Mikhail Kozakov chose to return to Moscow. Returning to Russia, he created his own theater called "Russian Entrepreneur Mikhail Kozakov." Since 2003 - actor of the Moscow Academic Theater named after Mossovet ("The Merchant of Venice" - Shylock, "King Lear" - Lear).

The versatility of the actor’s talent was revealed on the concert stage, where he reads poetry from A. Pushkin to I. Brodsky, Kozakov reads poetry on the radio, on the television screen, writes disks.

In 1999, the artist, together with saxophonist I. Butman, staged a concert performance based on I. Brodsky’s poems “Concert for Voice and Saxophone”.

In 1997, the "Acting Book" M. M. Kozakova, in which he talks about his life, about different times and people of art in them.