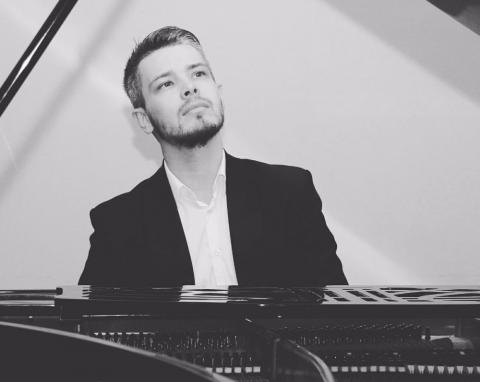 Born in a family of musicians. At the age of 6 he entered a music school (class I.Myachina). At the age of 9, he became a laureate of the regional competition of young pianists, at the same time Dmitry's first performance with the orchestra took place. At the age of 11, Dmitry became a laureate of the All-Russian Glinka Competition in Moscow, in 2002 he received a scholarship from the Russian Ministry of Culture “New Names”.
In 2007, Dmitry became the winner of the F. Chopin International Competition (St. Petersburg).
In 2008 he graduated from the N.A.Rimsky-Korsakov St. Petersburg College of Music (class E.Kairova), in 2013 - the piano department of the St. Petersburg State Conservatory.N.A.Rimsky-Korsakov (class E.A Murino).
She regularly takes part in concerts organized by the St. Petersburg House of Music. He took part in master classes by pianists such as A. Schiff, A. Yasinsky, A. Mdoyants, D. Kramer, V. Mishchuk.
He performs both solo and in ensemble at the largest venues in Russia and the world, including the Big and Small Halls of the St. Petersburg Philharmonic, the St. Petersburg State Academic Chapel, the Small Hall of the St. Petersburg Conservatory, the Large Hall of the Moscow Conservatory, Smolny Cathedral (St. St. Petersburg), National Theater named after K. Bayseitova (Astana, Kazakhstan), Sunport Hall Takamatsu (Takamatsu, Japan), Sheremetyevo Palace, Concert Hall of the Kazan Kremlin.

Since 2016, he is a member of the Union of Concert Workers of St. Petersburg.
November 2016 - the best accompanist (diploma) of the competition named after S. Rachmaninov (St. Petersburg)
March-April 2016 as part of a duet (soprano, piano) - 1 prize at the international competition named after Zara Dolukhanova "Amber Nightingale".
In the spring of 2017, a solo album of original compositions was released at the Melody studio. The works are presented in the field of cinema, painting.
In September 2017, he was a member of the pianists at the International Competition of Opera Singers E. Obraztsova.
Honorary Head of the Wings International Arts Center in Beijing.
November 2017 - scholarship holder of the Ministry of Culture.
November 2017 - the release of the album "Heart time", recorded at the studio of the House of Radio, which includes Baroque, classical, and author's music.
April 2018 - solo debut in one of the best halls in the world - Vienna Musikverein.
In May 2018, a solo debut took place in the largest center of culture and business cooperation - the House of Moscow in Riga and a speech in the Presidential Library as part of the cultural program of the St. Petersburg International Economic Forum - 2018 in the charity concert “Music of Love. Dedication to St. Petersburg. "
In June 2018, together with the People's Artist of the Russian Federation Konstantin Arkadevich Raikin, Dmitry took part in the Poetry evening dedicated to Elena Ushakova in the museum-estate of G.R.Derzhavin.
In July 2018, Dmitry was a full-time pianist of the Seventh International Competition for Young Vocalists Elena Obraztsova (St. Petersburg, July 16-21, 2018) and was awarded a special prize for concert mastery by Ascensio International Management.
The pianist’s repertoire includes a variety of solo programs, as well as many chamber music (vocal-piano and instrumental).