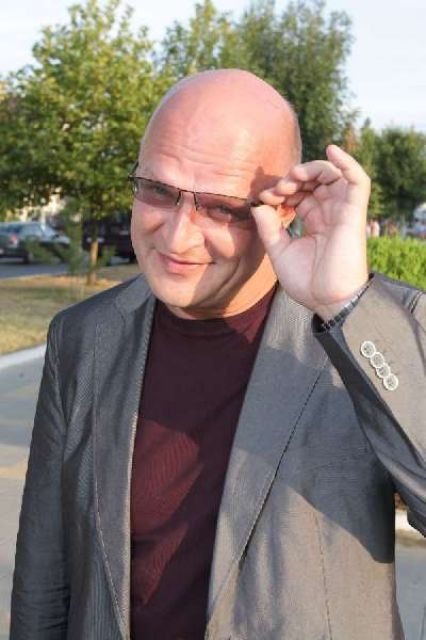 Born November 25, 1962 in Podolsk, Moscow Region in a family of engineers.

At school, Alexander Tyutin was fond of mathematics and physics, he graduated from a music school in piano, and mastered the guitar himself. He finished the tenth grade in a special boarding school at Moscow State University.

After school, Tyutin entered the Moscow Energy Institute, where at that time there was a strong student theater. In this theater, he fell into a synthetic troupe, where he mastered pantomime, sang and danced in musical productions, and played in avant-garde performances. In 1981, the theater became the winner of the Lenin Komsomol Prize and toured throughout the Soviet Union.

After graduating from the institute, he served as an officer in Georgia for two years (there was a military department at MPEI). Alexander was an engineer in the electronic systems of a military transport squadron, and was demobilized as a senior reserve lieutenant.

He was always drawn to acting, so after the army Tyutin entered the Theater School. Schukin.

Since 1987, Alexander Tyutin has been working as a director and actor in the Players Theater.

In 1992, he graduated from the directing department of VTU. B.V. Schukina (workshop of M. Ter-Zakharova).

In the movie, Tyutin made his debut in 1982 in the movie "Monogamous." His first role was due to the song. The student theater of the Moscow Power Engineering Institute, where Alexander studied, was invited to appear in the film "Monogamous", where they portrayed extras of construction students. Filmed during the day, and in the evenings sat "with a guitar." The director heard and asked to sing one song in the picture. The performer, student Sasha Tyutin, was prescribed a role with words - five episodes, in one of which he sang and played the guitar. "I got into the credits of the film, was at the premiere at the House of Cinema and this was my first cinematic shock," says the actor.

At the Kinoshok festival around Alexander Tyutin, a soulful and singing company always gathers. He has more than 100 roles: the actor starred in such venerable directors as Gleb Panfilov, Mikhail Tumanishvili, Zinovy ​​Roizman, Yuri Grymov and others. His role is negative characters, but he knows how to play so that the audience in his characters always finds something good one. On the account of the actor, dozens of charming villains who fell in love with the viewer. The actor has positive characters.

Despite the abundance of negative characters in his acting role, in life, artist Tyutin is a kind, cheerful and considerate person.

Currently, Alexander Tyutin is a very sought-after actor: every year he starred in 8-10 films.

Besides the fact that Tyutin is a good artist, he is also an accomplished businessman, as Alexander says: “Now, thank God, my business is my job. But since many artists have become legal entities, so formally I am a businessman - I sell my acting skills. But there was a period (I will not complain that there was absolutely no work, but not so much that you could live on it) when you had to engage in small business. And my brother and I opened several points in Moscow where they sold tapes, disks with the classics of world cinema. They didn’t piracy to sell the last blockbuster, but traded classics from Chaplin to Phillini and others. But, thank God, my profession has been feeding me for seven years now. ”

Alexander met his wife in 1990, when Irina came to the "Players" theater as an assistant director. At first they just talked, and then on the road there was a light romance. Alexander divorced his first wife, and since 1992, together, however, they officially registered the marriage only in 2002. Irina works as a casting director of a company producing TV shows and films.