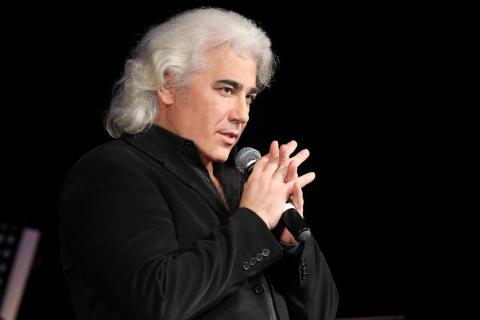 In 1991 he graduated from the St. Petersburg State Conservatory. ON THE. Rimsky-Korsakov (vocal class of associate professor S.R. Ryazantsev). The improvement of vocal skills was continued by the teachers E. Manukhova (Gromova), F. Paliazzi, F. Barbieri (master class 2000). In 1991-1995 he was a soloist of the Opera and Ballet Theater of the St. Petersburg Conservatory, on the stage of which he performed the parts of Eugene Onegin (Eugene Onegin), Figaro (The Barber of Seville), Aeneas (Dido and Aeneas). He made his debut on the Mariinsky stage in 1994 in the part of Dandini (Cinderella). In April of the same year he made his debut in the premiere of the opera The Wedding of Figaro (Count Almaviva).

He participated in the first performance in Russia of the opera by N. Karetnikov “The Mystery of the Apostle Paul” (conductor V. Gergiev; Great Hall of the St. Petersburg Philharmonic).
In 1995, he was invited to the Bolshoi Theater of Russia to participate in the production and premiere of Mozart’s opera “Figaro's Wedding” in the role of Count Almaviva. The performance was broadcast on the ORT channel.
He also took part in joint Dutch-Russian productions of the operas "The Wedding of Figaro" and "Seekers of Pearls" at the Kazan Opera House. The live broadcast of the performance “The Wedding of Figaro” was broadcast on the channel “Culture” (2003).
Many years of great friendship connects the singer with the St. Petersburg Musical Comedy Theater, on the stage of which he performed the parts of Edwin (“Silva”), Mr. X (“Princess of the Circus”), Count Danilo (“Merry Widow”), Rajami (“Bayadera”) , Tassilo ("Marica"), Billy Flynn ("Chicago") and many others.
Together with the St. Petersburg State Children's Musical Theater “Through the Looking Glass”, he was awarded the Golden Mask national prize for the performance “Cinderella” (in the nomination “Best Opera Performance”), in which he performed the part of Dandini at the invitation of the theater.
The Russian channel "Culture" invites the singer with solo concert programs to the program "Romance of Romance", in which he became a frequent and welcome guest.

He performed on tour of the Mariinsky Theater and under individual contracts in the most famous theaters and concert halls in the world: La Scala (Milan), Metropolitan Opera (New York), Covent Garden (London), Opera Bastille (Paris), Theater Real (Madrid) ), Bolshoi Theater of Russia (Moscow), Royal Opera House (Stockholm), Grand Theater of Provence (Aix-en-Provence), Lyon Opera House, La Monet (Brussels), Bunka Caican (Tokyo), Sofia National Opera, Fox Theater (Atlanta) ), Majestic (Boston), University Hall (Chicago), Royal Carre Theater (Amsterdam), Rotterdam Opera (Golla) diya), Opera Edinburgh (Scotland), Opera of Cagliari (Sardinia, Italy), Big and Small Halls of the St. Petersburg Philharmonic, Academic Capella of St. Petersburg, House of Music (Moscow), the Concert Hall. P.I. Tchaikovsky (Moscow), the Great Hall of the Moscow Conservatory and many others.
Conducts an active concert activity. The geography of the singer's tours covers more than 30 countries of the world and hundreds of cities - from Murmansk and Stockholm in the north to Pretoria and Dubai in the south, from Tokyo in the east to Los Angeles and New York in the west.
His extensive chamber repertoire includes more than 150 arias (Russian and foreign opera repertoire, arias from operettas, musicals), more than 200 classical and ancient Russian romances, pop lyric songs, foreign and Soviet pop classics. Vladimir Samsonov is one of the brightest interpreters of Russian romance, Soviet lyrical and military songs.
Winner of numerous Russian and foreign awards and medals. In 2008, he was awarded the Leonardo da Vinci medal of the European Academy of Natural Sciences for achievements and achievements in the field of art.

Discography:
Arias and duets from operas by J. Verdi (CD, released by the St. Petersburg Committee of Radio and Television, 1995)
J. Verdi's opera King for an Hour (CD, 1995)
Prologue (CD; arias, romances by PI Tchaikovsky and SV Rachmaninov, released by Sono press, 1996)
“We Met You” (CD, Recording of a concert of old Russian romances at the P. Tchaikovsky Concert Hall, Sono press, 2010)
“From Aria to Rock and Roll” (DVD, Concert Pop Show at the Concert Hall “Oktyabrsky”, TV