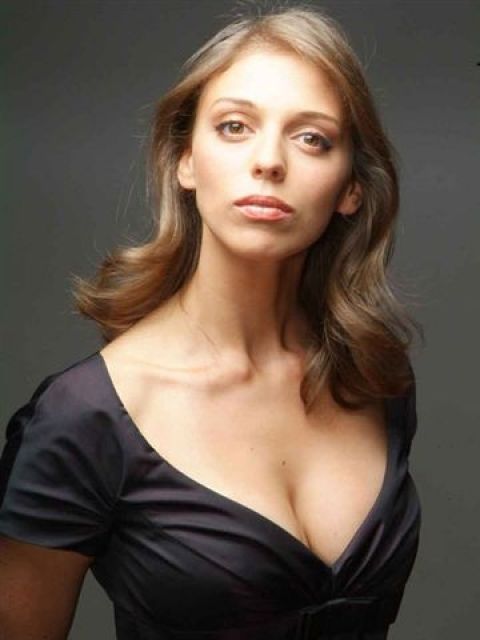 Laureate of the Prize “For Best Actress” at the VGIK International Festival in Moscow (1999, for the film “Flew”).
Laureate of the Prize “For the best acting” at the International Film Festival in Milan (2000, for the film “Flew”).
Theater actress
Nelly Uvarova was born in a family of oil workers. Her dad is an oil engineer, and her mother is an economist by profession. Nelly felt a craving for the theater since childhood. Together with her sister, she took part in school performances. Parents reacted to the passion of their daughters with understanding. Mom even wrote scripts for their productions.

By 2005, Uvarova had already become a famous theater actress. She was even nominated for the Golden Mask national theater award for best actress in the play Rules of Conduct in Modern Society. But she was still not known to a wide audience.

Katya Pushkareva
Popularity is usually brought by highly rated series or sensational films. Neither one nor the other on the account of the actress until 2005 was not. The truth was one major success - the role in the student work of Anna Melikyan, “Flew” (1999) - a black and white stylization of films of the 80s. The picture was highly praised by critics, and Nelly Uvarova was awarded at international film festivals in Moscow and Milan. But this picture did not reach the general public. In other films ("Boomer" and others), the actress got small roles.

The idea of ​​the series about an ugly but very smart girl who takes the first steps in her career, gains self-confidence, achieves success in work and in her personal life, was born in America. It was there that they first put on the series “Fall in Love in New York”. Later, double series with local color appeared: “Fall in love in Madrid”, “Fall in love in Paris”, “Fall in love in London” ... Finally, the wave has reached Russia. Our producers had a slightly richer fantasy than their foreign colleagues. The series was called "Do Not Be Born Beautiful." And Nelli Uvarova was invited to the role of the “ugly duckling” Katya Pushkareva, working secretary in the clothing company ZIMALETTO.

This invitation Nelly owes to director Alexander Nazarov, in whom she played in performances. The actress says: “I was one of the first to come to the casting, it lasted a long time, but in the end it was me who started acting with Irina Muravyeva, Raisa Ryazanova and Mikhail Zhigalov. These are great actors who help me a lot. And sometimes they intercede in front of a formidable director. When he says in a stern voice: "Nelka, another take!", Irina Vadimovna comes to the rescue ... "

Agreeing to the role of Katya Pushkareva, Uvarova made a small female feat. After all, not every woman (all the more beautiful) will agree to disfigure herself. But such is the acting profession. And Nelly Uvarova appeared before the audience as a formless and groomed creature in ridiculous, ill-fitting old lady dresses. By the way, Nelly's sister, Elena, works as a costume designer in this series. She then dressed Katya Pushkareva in antediluvian dresses, skirts, blouses and blouses that look like they were taken out of a grandmother's chest. “It was a pity for my sister to turn me into a ugly girl, but that was the task, and she did it splendidly,” Nelly admits.

Grigory Antipenko’s partner on the series, Nelly Uvarova, says: “Nelly is a very talented actress with hyper-charm. I think the success of the series is almost 100 percent dependent on it. I’ll also say that the cinema has become my second home. It is cozy, warm, always glad to see you, always a creative and welcoming atmosphere. ”

In the series finale, Katya Pushkareva is waiting for a wonderful transformation: she will turn into a beauty, and the one she has dreamed about for so long will fall in love with her. The case will end with a wedding - strictly according to the laws of the genre.

Nelly Uvarova admits that in real life, she and Katya Pushkareva have little in common. She, unlike her heroine, is a sociable person, loves noisy companies, easily meets people, loves and knows how to dress beautifully, use makeup, and like men. And yet - “... in the idea of ​​the main human values, Katya and I coincide, the actress says. “A common feature is the desire to move on, not to stop there, to achieve the objectives.”

However, Nelli Uvarova will not have to dress beautifully soon. The creators of the series do not release the actress anywhere without braces on their teeth, a beret of the century before last and stupid round glasses. Only in this form does it appear in public. However, the actress is philosophical about this. “Katya Pushkareva is just a mask,” she says. “Having covered yourself with it, you can be ridiculous, absurd, you can be ruffian.”

This did not stop Nelly Uvarova in an instant from becoming a popular actress. “They first recognized me on the street after the second episode,” says Nelly. - This happened during a full-time shooting at 3 a.m. on Tverskaya. During the break, young musicians came to me, heading to the club, said that they like my heroine, and invited me with them. But I could not accept their invitation - the shooting continued until the morning. " Today they recognize Uvarov more and more often: they ask for an autograph and smile at a meeting.