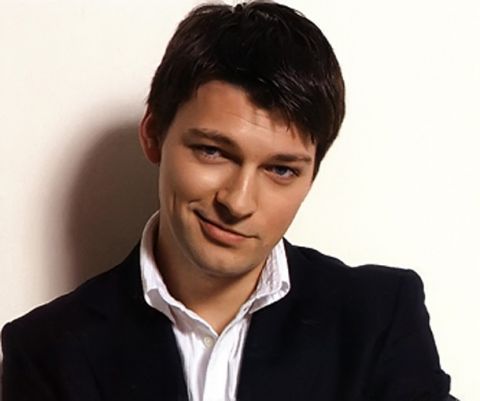 Daniil Strakhov was born in a family not related to the cinema. His mother is a psychotherapist, a private practitioner. Dad is a philologist, ethnolinguist. According to Daniel himself, such a rare name he was named not by chance. His father in 1976 was engaged in scientific works related to the fate of Prince Daniil of Galitsky. And so carried away by the materials that he decided to name his son in princely honor.

About his childhood, Daniel recalls: “Despite such an intelligent family, for example, I was so-so a schoolboy. Say, not so hot with what schoolboy. He studied well until the seventh grade. Further, this business suddenly bothered me, new hobbies appeared, and I simply ... quit studying. By the way, along with his studies, he also abandoned hooliganism, because until that notorious seventh grade he fought fiercely. Well, then there was a choice of profession ... "

In 1993, after graduating from high school, Daniel entered the Moscow Art Theater School. After studying for a year with Vanguard Leontyev, he later transferred to the Shchukin School on the course of Evgeny Rubenovich Simonov.

In 1996, as a student, Daniil Strakhov made his film debut. He starred in an episodic role in Boris Blanc's grotesque film “Career of Arturo Wu” based on the novel by Bertold Brecht of the same name.

After graduating from college in 1997, Strakhov was accepted into the troupe of the Gogol Theater. The debut was very successful. His first role - Prince Ableukhov in the play "Petersburg" - brought him the prize of the Moscow Debuts festival.

The next sensational work of the actor was the role of Chikatilo in the play "Tower of Chikatillo", played by him after leaving the Gogol Theater. The role, to put it mildly, is unusual, and Daniel naturally won over doubts ... “It is difficult to play any role, be it Romeo or Chikatilo. I will not say that I was pleased to play the latter. The feeling of some uncleanliness, of course, was present. In addition, the aesthetic tasks that the actor sets for himself have come across experimentation here. "Pulling" to the viewer was difficult. For my part, it was a pure experiment - to play a role that, according to the logic of things, should never have been given to me in my life. There are a lot of profanity in the play. At the very beginning of rehearsals, it was more like an adventure. It was completely unclear what all would result in. Moreover, the difficulty was that it was a one-man show, I was constantly on stage. ”

Finally, in 2001, Strakhov was accepted into the theater on Malaya Bronnaya. And again, bright extraordinary roles. In 2001, Strakhov played Dorian Gray in the play "Portrait of Dorian Gray", and a year later Caligula in the play of the same name. The work of the young actor was adequately appreciated, awarded prizes. In addition, filmmakers drew attention to him ...

In the movie, Daniil Strakhov initially played small ones, and these were mostly various losers or villains. For three years, he starred in almost ten different TV shows and films. The most notable works can be considered the role of Vitalik in the criminal series “The Brigade” and Anton in the series “The Best City of the Earth”.

And then came the "finest hour" of the actor. The adamant and noble Baron Korf from the TV series “Poor Nastya” instantly captured the hearts of not only young, avid girls, but also mature women who knew a lot about the male charm of women.

I must say that Daniil Strakhov always very carefully approaches the choice of role. He doubted this time: “Having received an offer to pass the tests, I thought about it for a long time. Still, such a series was launched in Russia for the first time and had a million undercurrents. The terrible word “soap” alone makes any actor think. But our joint desire with partners and producers to make not a "Santo Barbara", but a cool historical series, seriously affected my positive decision. Casting was carried out for two years. I hit him a year and a half after the start. Samples were immediately taken in the scenery and in costumes. ”

The shooting mode was very hard. Eighteen days for each month, ten to twelve hours per shift. Sometimes, the actors did not have to spend the night at home: they finished at three in the night, and at eight in the morning the next shift ...

For young actors, this work became a real test, as well as a serious school. Next to them, such “masters” of our cinema, like Olga Ostroumova, Albert Filozov, Emanuel Vitorgan, played side by side ... “We, almost inexperienced chicks, saw nothing but help from them. This attitude to work also imposes certain obligations and requirements on us - involuntarily raising the height of the bar, and striving not to lower it, ”Strakhov says.

About his character, he speaks like this: "Poor Nastya" - the first film where my type corresponds to the character of my character, and I am very grateful to the series for this. All the roles that were offered to me before him were purely episodic and purely negative (for example, in The Brigade I played a musician - an admirer of Bezrukov’s wife, an extremely nasty young man). And in the role of Korf, I tried to bring him from a negative to a positive character by the end, breaking the character of this hero. ”

Other work of the actor

After the release of "Poor Nastya" on the screens, Daniil Strakhov was declared the next sex symbol of Russian cinema. However, the actor himself is doing his best to get rid of this fame. Behind his attractive, "Hollywood" appearance lies a very serious actor. He is not going to repeat himself, to use the image already familiar to the viewer. Moreover, he soberly assesses the fact that fame is a very changeable thing. Today everyone loves you, and tomorrow ... To prevent this, daily work is necessary, for which Strakhov is ready, because he, by his own admission, is a workaholic.

After "Starship", where Daniel played a professional career intelligence officer, he starred in the series "Children of the Arbat", which attracted the attention of both viewers and critics before it was released. In the film adaptation of the famous work of Rybakov, he got the role of Yuri Sharok, by the way, also a scout.

Daniil Strakhov tells about the work: “It was insanely difficult to voice this material. It is imbued with a unique atmosphere, which Andrei Andreyevich created on the site. It was very difficult to enter this state at the dubbing. The director is so subtle, understands so precisely what he wants to shoot about, and at the same time he loves the actors. The combination of such qualities simply delights me. I bow to his legs ... "

In addition, soon the audience will be able to see the work of their beloved actor in Malyukov’s film “Stormy Gates” and in Tatyana Magar’s four serial film “Traders”. In “Torgashi” he played the talented young mathematician Nikita Ikushkin, who, after perestroika, remains out of work and tries to find a way out of this situation. His beloved girl is played by a delightful fashion model Inna Gomez.

Daniel met his future wife, Maria Leonova, while still studying at the Shchukin school. They both studied on the same course. As Daniel admits, it was love at first sight. But then Masha did not pay attention to the young man in love.

Several years passed, and they met again when both got to the Theater. Gogol. Then a serious relationship ensued. After four years of marriage, Daniel and Masha formalized their relationship.

In addition to the acting profession, Maria learned to be an interior designer. She acted as a decorator, designed apartments on Old Arbat. But she considers the theater to be her main work. She plays in the performances "Fatherless" (along with Daniel) and "Petersburg". She starred in the film "One of Many."