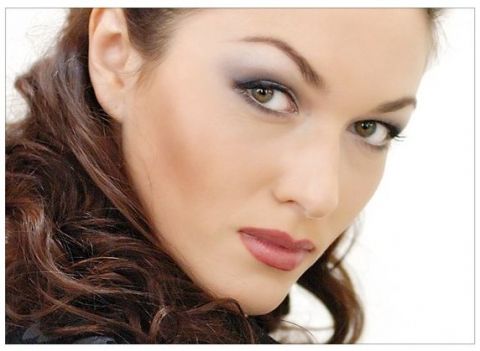 Julia was born in 1980 in the usual Belgorod family of Lyubov and Evgeny Takshin, when they already had an eight-year-old son Volodya. Parents worked at the Energomash plant: dad was a caster, and mom was the editor of the newspaper Trudovaya Slava.

Julia’s mother hoped that her daughter would also take up journalism, and then the teachers predicted her a newspaper career: in high school, her articles began to appear on the pages of local newspapers.

In general, Julia has always been, as they say, in the class asset. In her native school No. 45, they remember that not a single gala concert was complete without Takshina: the girl sang, and danced, and participated in school performances.

“She just shone on the school stage,” recalls math teacher Zinaida Babashkina. - It seems to me that even then she was preparing herself for the career of an actress. She was distinguished from many girls by her impeccable taste and manner of behavior. ”

Dancing. From Belgorod to Moscow

With love for dancing, little Julia was infected by her older brother. Vladimir - he is eight years older than Yulia - is an example to follow for Takshina in everything. In his native city of Belgorod, Volodya was the star of the Sovremennik ballroom dance ensemble. And Julia at the age of 7 stated that she also wants to enter this team. The dream turned into numerous tours of the cities. And when Julia grew up, brother and sister began to perform in pairs, which for the girl was the pinnacle of happiness.

But soon the idyll ended. Volodya left Belgorod to work in Moscow - he was invited to his theater by a parody of Alexander Peskov. And a few years later, after graduating from school, Julia went after her brother to conquer the capital.

Julia was about to follow in the footsteps of her mother journalist. But in the exams at Moscow State University, she failed, not getting one point. The girl did not want to return home, because she firmly decided to take revenge in a year, and began to engage in preparatory courses.

Although mom and dad helped her daughter with money, Julia, being away from her parents, felt already quite adult and decided to earn her own living. Brother arranged Julia in a dance group that accompanied the performances of the stars. At the concert in the "Olympic" Takshina was on the same stage with Larisa Dolina, Oleg Gazmanov, Alexander Buinov, Soso Pavliashvili. “She was amazed that she did not feel the slightest embarrassment next to celebrities,” recalls Takshina. “In the spotlights, in front of the multi-thousandth hall, I felt very comfortable.”

After this concert, Gazmanov took Julia to his team. She really liked the work, but, alas, did not bring any special money. The girl had to save, even on food, and she rented a room for one night, because she could not pay for a whole month. Sometimes Julia spent the night with her brother, but tried not to abuse his hospitality: Volodya and her friend rented a tiny apartment, and it was awkward to constrain them. Julia didn’t tell her mom and dad about her difficulties, she cheerfully reported on the phone: “I'm fine. I study, earn extra money. ” And the parents, in turn, tried not to show their daughter how worried they were for her. “I was very afraid that Moscow would spoil Julia, because at the age of 17 she plunged into the world of show business full of temptations,” her mother Lyubov Mitrofanovna recalls today. “And how happy I am that my daughter has remained the same - decent, sincere, generous, open.”

Takshina nevertheless entered the journalism department, but after two years she got cold in journalism and dropped out of school. Now all her thoughts were occupied by the scene. Naturally, Julia wanted to shine on her, and not flicker in the background. And then she got a job in the dance group “Diamond girls”. Girls performed in clubs, warming up the audience. But after some time, the crazy nightlife began to weigh on Julia: “Work turned into hard labor - during the holidays we worked in 14 clubs overnight. And no prospects were visible. I was terrified that life was flying, and I had neither education, nor profession ”...

At 21, Julia Takshina decided to drastically change her fate, namely to devote herself to acting. She entered the Shchukin school on the course of V.P. Poglazova, and a little later she began to play in the Vakhtangov Theater (in the play Echelon).

In 2005, the debut of Yulia Takshina on the television screen took place - she appeared in the image of the bitchy Vika Klochkova in the series “Don't Be Born Beautiful”. The actress admits: “My heroine is a bitch. Ironically, I always have to play these. Many friends say that when you see me for the first time, you get a complete sense of bitch. And then it turns out that everything is just the opposite. Vicki’s actions are not characteristic of me at all. ”

Over the year, the series gathered a huge number of fans, becoming one of the most rated television projects. The name of Julia Takshina became known to millions of viewers, but, probably, the most important thing is that it was here, on the set, that she found her love. The chosen one of Julia was the leading actor in the series - actor Grigory Antipenko.

Currently, the Julia family lives in Moscow. The actress works in the Theater. Vakhtangov and continues to act in films. Recent works include roles in the films A Man Without a Pistol (Inga-Lena) and 100 Dollars Per Hour.