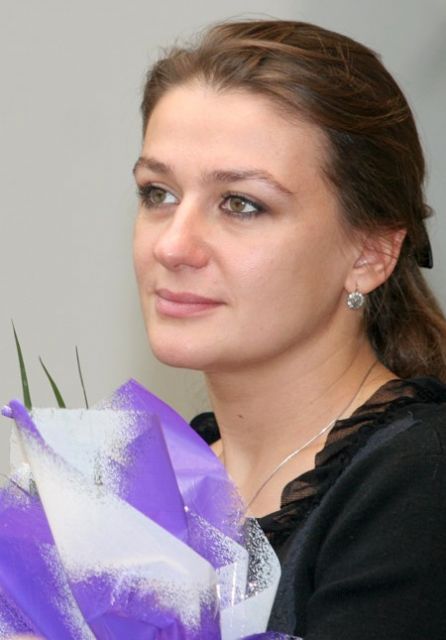 Anastasia was born in Leningrad on September 19, 1969 in a family with noble roots. Her parents were doctors. Also in the family there were two more children: both brothers Anastasia engaged in medical practice. And in the biography of Anastasia Melnikova, another path was chosen - the actress. My father was not happy with this choice, he wanted Anastasia to study at the Faculty of Philology.

Higher education Anastasia Melnikova in biography received at the State Academy of Theater Arts of St. Petersburg. She graduated from the St. Petersburg Theater School girl in 1990. Anastasia entered graduate school. Then she left for the USA, where she played in a musical (Pippin on Broadway), and at the same time collected material for her dissertation, which was devoted to American musicals. But Anastasia failed to defend her work. She plunged into the acting life with her head, there was no time left for anything else.

Returning to Leningrad, Anastasia began to play in the theater. The debut in the movie in the biography of Melnikova took place in 1990 ("Afghan Break"). Then several more films followed: Russian Transit, Giselle Mania and others.

As an actress, the biography of Anastasia Melnikova became widely known after the release of “Streets of Broken Lights”. There, the actress played Anastasia Abdulova. In the series, Nastya performs all the tricks on her own .. Among other films by Melnikova: “Idiot” (2003), “Case of Kukotsky” (2005), “Execution cannot be pardoned” (2007), “Sonya Golden Handle” (2007), “Demon” (2008) and many others. She also starred in the series "Gangster Petersburg", "Agent of National Security." Anastasia managed to test herself as a TV presenter, led the projects “Dashing 90s” (NTV), “Private visit of Anastasia Melnikova” (100TV). She participated in popular projects, for example, in "Dancing with the Stars."

In 2002, Anastasia gave birth to a daughter, Masha, whom she is raising alone (she divorced her husband after eight years of marriage). He tries to spend all his free time with his daughter. In 2007, an important event took place in the biography of Anastasia Melnikova. She received the title of Honored Artist of Russia.