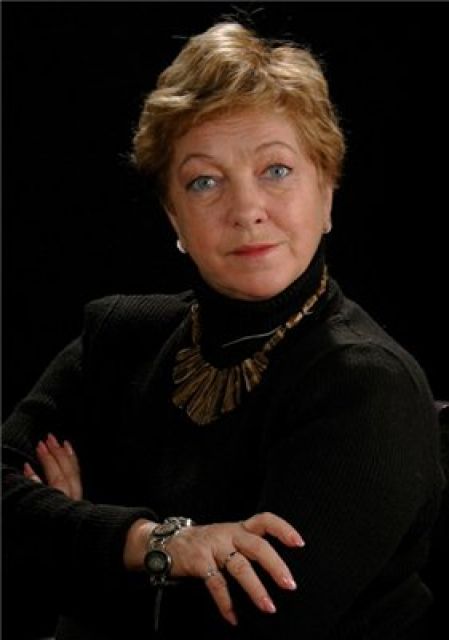 People's Artist of the Russian Federation.

Olga Volkova is a paradoxical man. She grew up in an acting family, but says that since childhood she dreamed not at all about the stage, but about archeology. And if I studied at a good school, then who knows ... Maybe we would never have seen her like no other heroines in the cinema, in the theater, on television. But, fortunately, everything turned out as prescribed by fate. Grandfather Olga Volkova - the famous provincial actor Ivan Alexandrovich Volsky - the creator of the St. Petersburg theaters "Curve Jimmy" and "Ancient Vaudeville."

Olga herself grew up a hooligan, studied poorly and constantly made her classmates laugh. Once a strict girl came up to her and told her to come to the drama circle. Olga hated amateur performances, but still came. The girl was Alice Freindlich, the leader of the circle - Maria Prizvan-Sokolova.

Unfair and not very attractive, Olga Volkova failed at the theater institute, and a year later (in 1957) she got a "thug" in the Leningrad Youth Theater, where she was constantly criticized and considered her hopeless. In 1960, she graduated from an acting studio at the Youth Theater (workshop of L. Makariev) and became an actress in the theater. Soon, the actress spotted a bright personality, and she began to work a lot.

In the Youth Theater Volkova worked until 1970, then she performed for six years on the stage of the Comedy Theater named after NP Akimova, and since 1976 she became an actress of the Leningrad BDT named after Gorky, where she was invited by George Tovstonogov.

They say that in the theaters where she worked, they feared her for a razor-sharp language. Olga Volkova does not agree with this: “They didn’t fear me, they didn’t love me. They didn’t understand me, and when they don’t understand a man, they don’t love him. I’ve never been in a herd, although I don’t consider it a good quality at all. Actually I am a very contact and mobile person ... But my circle of interests was always a little more than just a theater, I never died of a desire to come on stage at all costs, I never kept the usual acting saying in my thoughts: if I don’t play I’ll hang this role. ”There are always some backstage gatherings in the theater, but Rma of behavior. Although I grew up in an acting family, I don’t really like all this. And I was not afraid of anything. I had no fear of my superiors. There was no trepidation or fear of either the secretary of the party bureau or the chief director. I was it's hard to crush because I never lose my sense of humor. " For the lack of fear and the ability to control herself, the actress was highly appreciated by the director of the BDT, Georgy Alexandrovich Tovstonogov.

In the movie Olga Volkova - since 1965. Initially, she starred a little and mainly in episodic roles. The most notable work was the role of Lotta in the operetta film The Bat.

In the early 80s, director Eldar Ryazanov drew attention to Volkova. He saw the actress in the play based on the play "Colleagues" (authors Braginsky and Ryazanov) in the role of Kalugina. Then he got the idea to invite her to her film "Station for Two", where she played the waitress Violet, a small but memorable role. After this film, Volkova began to act a lot, including Ryazanov. In the movie, the actress plays strange, sometimes eccentric women, very temperamental and eccentric.

In 1991, Volkova played one of her best roles - beggar Katya Ivanova in the social tragicomedy of Eldar Ryazanov's "Promised Heaven." They say that this role was written by Ryazanov specifically for Olga Volkova. After successful roles in the films "Hello, fools!" and "Promised Heaven" Eldar Ryazanov calls the actress his talisman. In recent years, Olga Volkova has been actively starring in various television series (Emma Markovna - "Yevlampiya Romanova. The Investigator Is Leading the Investigation", etc.).

Having worked for more than twenty years in the Leningrad BDT, Olga Volkova suddenly abruptly changed the usual course of life. In 1997, she left her hometown and moved to Moscow. Since then, she has been working under contracts - actively participating in enterprises.

Olga Volkova explains her move in this way: “There aren’t so many entreprise and films being shot as in Moscow in St. Petersburg. To be here means to be able to work and keep the house afloat. Working in entreprises both psychologically and creatively suits me more than that. the theater staged a performance for eight months, a year or even more. It takes forty-two days here. It’s very mobilizing. In addition, I have new partners all the time. It’s responsible, exciting and interesting. Strange as it may seem, it’s very creative in the entreprise atmosphere. People understand that dol I have to be responsible for the level, so such a rich and fast work is going on. I worked at the BDT for 23 years, before that for five years at the Comedy Theater and 15 years at the Youth Theater. I knew my partners by heart. Sometimes I played the same performance for twenty years. It’s already empty, dried to the limit, but it’s still going on. And in the entreprise the performance, which is on the decline, is immediately removed, ends its existence. "

As her ex-daughter-in-law Chulpan Khamatova says about Olga Volkova: "She did not lose either her taste for life or her frenzied excitement with age."

Last name Volkova from the actress from her first husband. The second husband of Olga Volkova was a popular theater and film actor with the same surname - Nikolai Volkov, Jr., who plays on the stage of the Theater on Malaya Bronnaya. The third husband is Vladimir Khovralev, the main artist of the Puppet Theater in St. Petersburg. Olga Volkova speaks of him as a person of rare culture and intelligence, who, as the actress herself put it, has an amazing literary taste and who, with all this, does not consider it a big favor to do something around the house.

The son of Olga Volkova, Ivan Volkov, is also an actor, the former husband of theater and film star Chulpan Khamatova. The daughter Katya also starred in a movie, married to Arkady Kovaly, an actor in the St. Petersburg Maly Drama Theater.