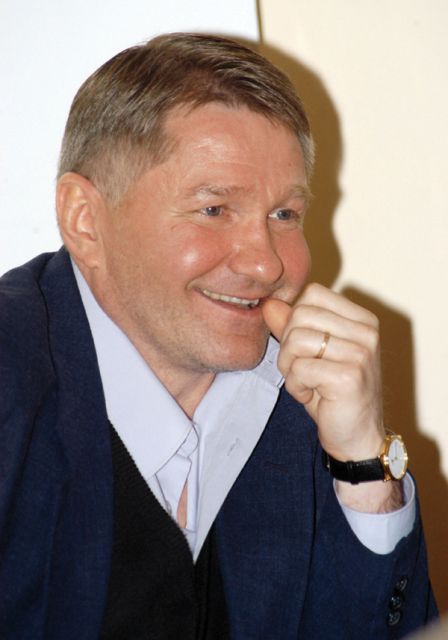 Honored Artist of the Russian Federation. Award "Kinoshok" in the nomination "Prizes for best roles for 1996.

While still at school, Igor Bochkin played in two films. And he got on the set quite by accident. In the cinema "Forum" he liked the assistant director of the film "Lights", and she invited him to audition. Igor played the role of the pioneer Kuzka Zhuravlev, who was cheerful and cunning, who, along with the other guys, was sent on the instructions of the District Committee to the village to eradicate illiteracy. Then, almost immediately, Igor Bochkin starred in the children's film "Red Sun" in the role of Mikhail Basharin.

After serving in the army, Igor Bochkin, recalling his experience in cinema, decided to enter GITIS. Despite the huge competition, he passed without any problems. His character also affected (Igor was calm, did not jerk), and, of course, his natural talent.

Already in his first year, Igor Bochkin married his classmate. He recalls: “Even at the entrance exams, I laid eyes on a pretty girl with a beautiful name Alice, then we ended up in the same group and somehow, immediately, with lightning speed, our romance began. We spent all the time together - we played sketches, stayed up late in the audience, talked about something. We got married in the first year, and broke up at the end of the institute. Apparently, I still turned out to be a boy with abilities - I was invited to several Moscow theaters, but Aliska was not called anywhere. I chose the average Gogol Theater and immediately began to play the main roles. And my wife didn’t take place in a professional sense - envy and jealousy began. ”

At that time, Igor starred in films a little and in small roles. Among his characters are: Vitek in Nikolai Skuybin’s film “Who Knocks on the Door to Me ...”, Izvekov in Andrei Razumovsky’s drama “Such a Tough Game - Hockey”, senior clerk Osadchy in the drama “Obstacle Course” by Mikhail Tumanishvili.

During the filming of the film “Such a tough game - hockey”, he met his future wife Svetlana. Igor Bochkin recalls: “My second wife was an art historian with Slava Zaitsev, she had just graduated from the institute and was practicing as a costume designer in the picture. Everything happened swiftly, literally on the very first day, some incredible unbridled passion. ”

But the second marriage was not long. Affected by his immoderate amorousness and explosive, reckless character. Bochkin himself admitted: “I have a lot of vices, I’m an absolutely unbearable person and it’s very difficult to live next to me. I like to walk, I am explosive, emotional, I am like a hurricane, I can make a lot of noise, arrange a “home building”. From the second marriage, the actor left his daughter Sasha. Together with her mother, they subsequently left to live in Spain.

The first major film role went to Igor Bochkin in 1988 in the sensational film directed by Sergei Snezhkin, "An emergency of regional scale." In those years, the time of perestroika, Komsomol was still considered the leading and leading organization of all youth. The film revealed the depravity of the Komsomol "elite". Bochkin played through and through the vicious Komsomol leader Nikolai Shumilin, and also starred in a rough sex scene. What kind of character should have a person who took a chance on it in the Soviet years. Probably, such as that of Igor Bochkin - frank, decisive and self-sufficient.

In the late 80s Bochkin married again. He met his third wife Svetlana by chance. One of his friends invited Igor to spend time in the company of two girls. “That very evening I stayed with Svetlana: a few days later her husband arrived on a business trip. I had to explain to him that he was late. "

After the film "PE of a regional scale" Bochkin began to be invited to the main roles. In 1990, he played in the political detective "The Furious Bus" of the leader of the terrorists, who took the bus with schoolchildren hostage. The film was shot based on real events that occurred in December 1988 in Ordzhonikidze. Then there were the main roles in the tragicomedy “The Strong Man” (driver Spiridon Rastorguev) and the detective “Circle of the Doomed” (journalist Sergey).

In the early 90s, the director Yury Belenky decided to make the Russian action-packed series “Goryachev and Others”, in the wake of the popularity of imported TV shows that flooded the air. The script was written specifically for Igor Bochkin, who was entrusted with playing the main role. However, the resulting film had almost nothing to do with the original script. Goryachev and Others appeared on the screens in 1992, and although against the backdrop of a gorgeous foreign “soap”, the low-budget Russian project looked a bit pale, nevertheless it caused a great response from the audience. And Bochkin himself, as they say, woke up after the release of "Goryachev ..." famous.

In the 90s, a number of films were released with the participation of Igor Bochkin. So in the adventure melodrama of Vladimir Balkashinov "Report" he played the former paratrooper Pavlo Ivanov, who, together with an American journalist, is looking for a "vaccine of love." And in Valery Lonsky’s crime comedy “Barkhanov and his bodyguard,” Bochkin, together with Viktor Rakov, played dashing, charming crooks who carry out their scams and get out of the water. Both films were far from masterpieces, but at least stood out from the general dullness and collapse of Soviet cinema in the mid-90s. For Barkhanov, Igor Bochkin even received a prize for the best male at the OKF of the CIS and Baltic countries “Kinoshok-96” in the city of Anapa. In addition, these roles added to the actor’s popularity, securing the image of a “reliable tough guy”.

Igor Bochkin regularly takes part in other theater projects. In 1999, he played in the play "Russian Roulette" at the Mayakovsky Theater. In addition, the actor was involved in the performances of La 'Theater “Fool, this is love!”, The Production Center “RussArt” “Hostages of Love”, Theater Agency Art partner XXI “Halibut Day”.

Igor Bochkin lived for 14 years with his third wife. Svetlana became a successful business woman. But this did not stop the womanizer - he was carried away again ... Anna Legchilova, theater and film actress, became the new, fourth wife. Their romance began in 2000 at the Pushkin Theater, where Igor and Anya played two lovers in the play "Travelers in the Night." Then they starred together in the films Yellow Dwarf and Kidnapping.

By the way, for Igor, novels on the set were not uncommon. As the actor himself admitted, he needed them for courage. But all the novels ended with the end of filming. With Anna Legchilova, everything turned out differently, very seriously. Igor Bochkin speaks of His current wife with great love and respect: “I believe that a woman should be smart and beautiful. It is in that order. And also patient. Like my wife, Anya. Probably, for all these qualities, I love her. She suffers my difficult character, and I sincerely do not understand how she succeeds ... "

Recently, Igor Bochkin has been shot a lot. His characters can be both positive and negative, but they are all equally powerful people. Among the roles of Igor Bochkin: the local Petukhov in the series The Moscow Saga, Major Arseniy Rogozin in the action-packed film Remember, My Name is Rogozin!, The bandit Bogdan Petrovich Zayko, nicknamed Svan in the movie Ashes of the Phoenix, 2nd Secretary of the District Committee Pavel Konstantinovich Skvortsov, former head of the pre-trial detention center Konstantin Bulanov in the TV series “Ostrog. The Case of Fedor Sechenov ", Major Samokhvalov in the series" Saboteur. The end of the war ”, Andrei Ivanovich Shevchuk in the series“ Mad ”and others.