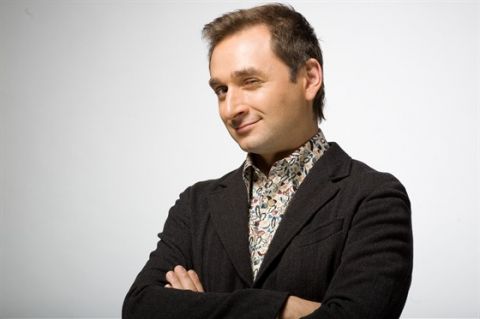 He studied at an ordinary school (he was always far from an excellent student) and a music school (he could not graduate from the piano class for all seven years - he dropped out after about grade 3). The initiators of the fact that Sasha studied music were musician parents.

Spent 2 years in the army, in Samara, in a military orchestra valiantly played on a small drum, rising to the rank of junior sergeant. 1993 Graduated from the Gnesins State Music College (in the class of musical comedy). In the early 90's, a talented actor and a brilliant graduate of the school. The Gnesins went to the United States, where for several years he was engaged in productions of Broadway musicals.

Having thorough preparation of a music school and two years of work on Broadway in a musical, he was selected by the MUZ-TV channel and became the face of this channel for several years.

In 1998, already in the status of a popular TV presenter, he came to Russian Radio. His programs became classics of the genre, and he soon took the post of program director of the radio station. At the same time, he remained in demand as a presenter - on his account large concerts, famous promotions and big budget shows.

In April 2004, he aired on First Popular Radio. His evening show “Without Gingerbreads!” Is rapidly gaining popularity, because he knows the whole truth about the domestic show business and there are no illusions about it.

He debunks myths and confirms rumors, explains how things really are. Professionals - producers, arrangers, journalists, clip-makers - those who are familiar with the realities of backstage life, take part in the conversation. Themes are the most intriguing: “Star Factory” - artists or who? ”,“ Personal life as an incentive for popularity ”,“ Education hinders popularity ”,“ How to sing without a voice? ”,“ Who is the first to spur, that is the author! ”And etc. etc. Listeners actively participate in the discussion.

It is impossible to deny Alexander the rank of an absolutely irresistible man; it’s hard for a woman to resist him. Maybe this is one of the main components of his success. At first he was very extravagant. A beard with an anchor, a combination of a black tailcoat and jeans strongly distinguished him from a large number of people like him; the scar above the eyebrow also played a role, creating a raid of such a fashionable "masculinity" (the scar, by the way, is completely real, made by Pryanikov as a bully in a park in a disco).

Today, Alexander Pryanikov is one of the most popular figures in Russian show business. Firstly, it is the most acrid, caustic body and radio presenter. At the same time, his causticity and sharpness are combined with amazing tenderness and sensitivity, kindness and concern for people. Secondly, he is very educated (his level of intelligence is much higher than at first glance it seems). And, thirdly, a courteous man who does not miss a single spectacular woman. A woman, even to whom the phrase “all men in front of her stacks fit”, will not easily get his attention.

He is not only ironic in relation to others, but also critical of himself. He considers himself "a subtle organism that seeks maximum harmony with the environment." However, he does not deny that he is poisonous, that it is difficult for him to please. "Yes," you say, "a very controversial nature." We answer: "But is this not the key to success?".