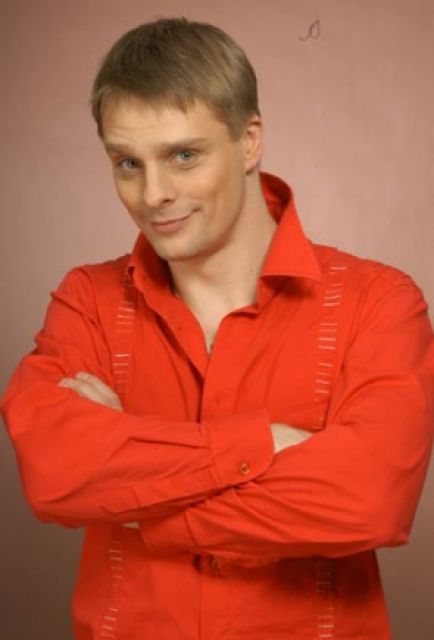 Alexander’s grandfather, a purebred Pole Benedict Nosek, moved to Ukraine at the beginning of the last century. Here he simplified his surname to Nosik, married a Kashir bourgeois Alexandra Subbotina. Both his sons Valery and Vladimir Nosiki later became actors.

Valery Nosik, a popular comedian, met actress Maria Sternikova during the filming of "Hurry to Build a House", which took place in Moldova. Their romance ended in a marriage, which for Valery Nosik became the second. In 1971, their son Alexander was born.

Little Sasha was repeatedly invited to act in films. Still would! The son of popular actors. But parents (especially mom) were against it, afraid to spoil the child. The only film in which he starred with mom and dad was the short film by Sergei Gurzo "We will go to the forest for mushrooms ...". Sasha played his father’s neighbor, and his “mother” was the famous actress Ekaterina Vasilyeva.

But on the stage of the Maly Theater, where his parents and his uncle worked, Alexander had a chance to perform from an early age.

When the boy was nine years old, his parents divorced. Maria Sternikova married actor Alexei Kudinovich, who worked in the same theater. Alexander admits that he had a warm relationship with his stepfather.

At the end of school, Alexander was not going to become an actor. But what about the parents? Valery Nosik really wanted his son to continue the acting dynasty, but his mother was not enthusiastic about this idea. They advised Alexander to decide on the choice of profession himself: “Son, what are you interested in? The economy? So go to the economic. And then, if you want, go to the theater. ”

Alexander did so. Immediately after school, he applied to the Plekhanov Institute, but failed in exams. Then the young man entered the correspondence financial and economic college, after which it was possible to go straight to the second year of the institute. In addition, as Alexander found out, college students were granted a reprieve from the army. No, he did not intend to evade service, but he also did not have a great desire to “fulfill his civic duty”.

However, after studying for three months (by the way, “excellent”), Alexander found out that the postponement does not apply to him - she was given only to applicants after the 8th grade. “And what was I to do? He says. “Don't run away.” I went in for sports, had seen enough of Soviet films about paratroopers and was generally a patriotically educated young man. I immediately said that I wanted to go to the Airborne Forces or border guards. ”

He didn’t get into either the airborne forces or the border troops. For two years, Alexander honestly served in an air defense battalion in Belgorod. Alexander recalls that period of his life: “They gave the weapon to hold only once on an oath, but he mastered the shovel during the service thoroughly. Digging gardens, fields, trenches for gas pipes, loaded cement. But I do not regret it. More than the army, it frightened me that I had to run, hide and be afraid all the time that they would find you. He served, and you are a free man. ” In addition, according to Alexander, during the service he “gained useful experience, a lot of knowledge, tempered character.”

After the army, Alexander, on the advice of his father, nevertheless decided to try himself in the acting field. He entered the VTU them. Schukin. As Alexander himself says: “I tried, and I liked it.” That's just the father did not have time to rejoice at the successes of his son. By the time Alexander graduated from the school, Valery Benediktovich was already gone. At this moment, Alexander was supported by his mother, who became for him the most severe and demanding audience.

After graduating from the Shchukin school, Alexander began working at the Maly Theater, where his mother, stepfather and uncle Vladimir Nosik also play. In addition, Alexander took part in the performances of the Cherry Orchard Theater, the Variety Theater, and entreprise.

Cinema for Alexander Nosik began with small, but memorable roles in the so-called "police" series - "Maroseyka, 12", "Kamenskaya", "Turetsky March". And he got into this "serial stream" absolutely by accident. In a well-known acting agency were looking for an actor - "young and cheeky." After several albums with photographs, the assistant director exhaled: “Oh! This one! ”I read the signature:“ Alexander Nosik. ” An agency employee pointed to a young man sitting in the room: “So there he is!” The assistant looked incredulously at the man with the bristles running and said: “In my opinion, you need to change the photo.” The man replied: “For now it’s easier for me to shave!”

A bit later, popularity also came. And the "blame" was the series "Special Forces." It was he who brought the actor many fans. Fans too, but fans in the first place. And how could you not fall in love with cool, fearless and, moreover, pretty commandos. One of these, nicknamed the Serpent, was played in the series by Alexander Nosik.

The directors liked the image of the “tough” guy, and Alexander began to be invited to various action films. In the TV series "The Return of Mukhtar," the actor played the role of operative Artyom, the owner of the dog named Mukhtar.

What is important, Alexander is not a timid person in real life either. “This image of a tough guy is part of me,” the actor admits. - I can hold a punch. And at the moment when I am assembled, concentrated, I really want something very much, I really am. But in life, especially fighting and literally defending oneself with fists did not have to be especially right. I am not rich in bloody stories. So, there were several situations that were quite harmless both for me and for my opponents. We have to defend our place more, so to speak, energetically. Proving all the time that you have a place to be. ”

About the personal life of the actor, we will not go into detail. We will only say that he spent seven years in a civil marriage with one girl. Then they broke up, but maintained friendly relations.

The second civil wife of the actor was a girl named Yana. He met her on the set of the TV series “The Return of Mukhtar”, where Yana, being a student at the TV Institute, was an intern.