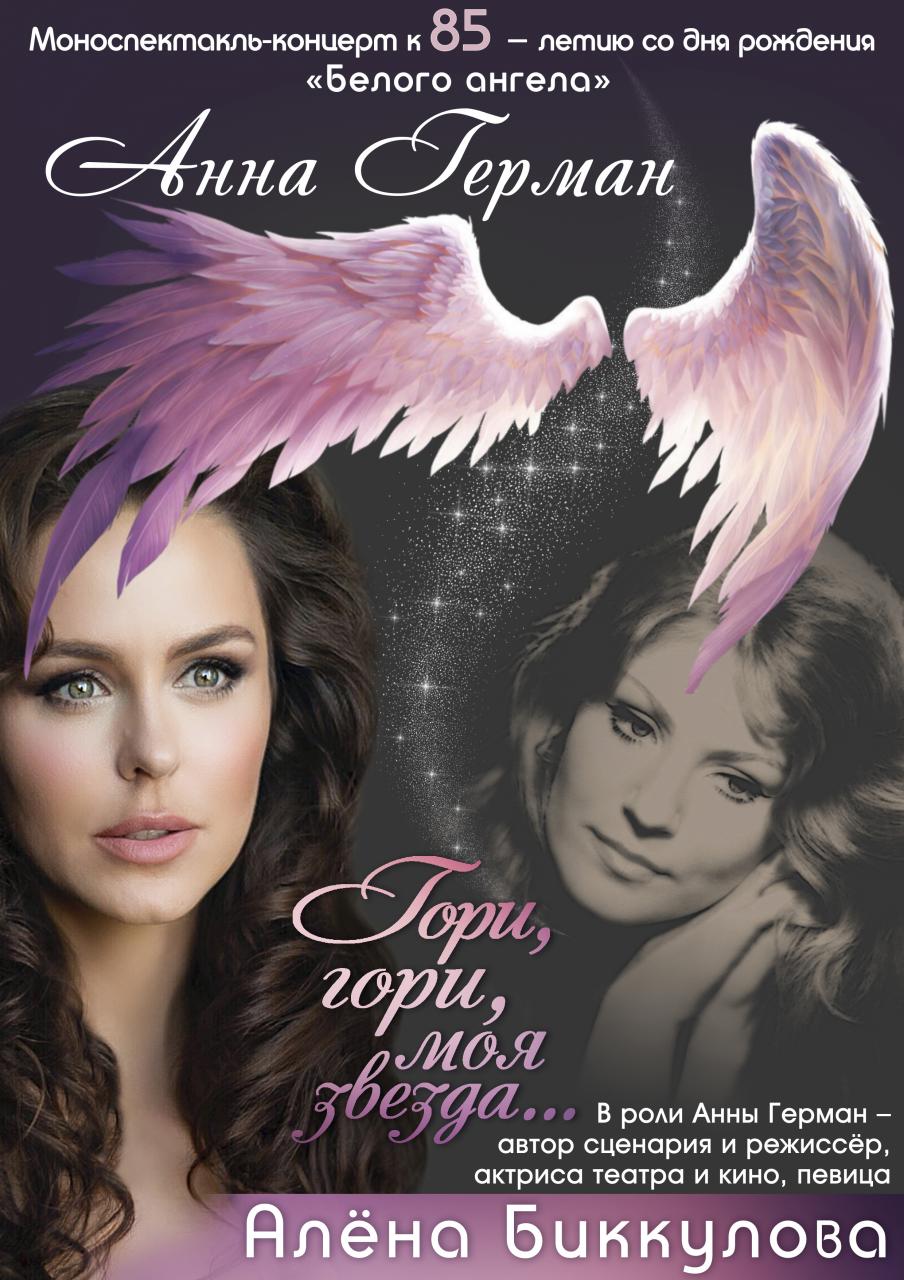 For the first time on the theater stage of the Grafiri Panina Theater.
Solo performance-concert about the life of Anna Herman.

In the role of Anna Herman – the author of the script and director, theater and film actress, singer Alena Bikkulova.

In this performance – the story of the life of the singer Anna Herman, told by her. The singer was distinguished by great musicality, artistry, special warmth and soulfulness of the created song image. Her voice is a powerful lyric-coloratura soprano of an unusual transparent, high timbre.

At the peak of her career, Anna Herman was caught in a terrible accident and was on the verge of life and death. None of the doctors could have thought that Anna would survive, but she was stronger than fate itself! After twelve days in a coma, she was able to find the strength and overcome the pain, learned to walk again and went on stage again. Heaven had given her a chance to start her life anew. Anna Herman did the impossible, becoming the" white angel " of the Soviet stage…

Soviet songwriters Arno Babajanyan, Yevgeny Ptichkin, Alexandra Pakhmutova, Jan Frenkel, Oskar Feltsman, Vladimir Shainsky and many others wrote songs for her. Anna Herman performed in the USA, Canada, Great Britain, Australia, France, Portugal, Italy, Hungary, Mongolia, toured the GDR, Germany, Czechoslovakia and the USSR. Anna is a laureate of national and international festivals in Monte Carlo, Wiesbaden, Bratislava, San Remo, Naples, Viareggio, Cannes, Ostend, Sopot, Opole, Kolobrzeg, Olsztyn, Zielona Gora. But her fate was full of trials: even in her pre-war childhood, Anna had to endure the first losses. And in the future, her short but bright life will consist of dizzying ups and unexpected downs.

In 2003, in Moscow, on the Square of Stars in front of the GCCZ "Russia", the name star of Anna Herman (the only foreign performer among other stars) was laid.

In 1975, the name of Anna Herman was assigned to the asteroid 2519, discovered at the Crimean Astrophysical Observatory.

In 1987, the central street in her hometown of Urgench (Uzbekistan) and the amphitheater in the city of Zielona Gura (Poland), with a capacity of 6 thousand spectators, were named after Anna Herman. Her name is given to Ryabinovaya Alley in Moscow (Matveevskoe district).