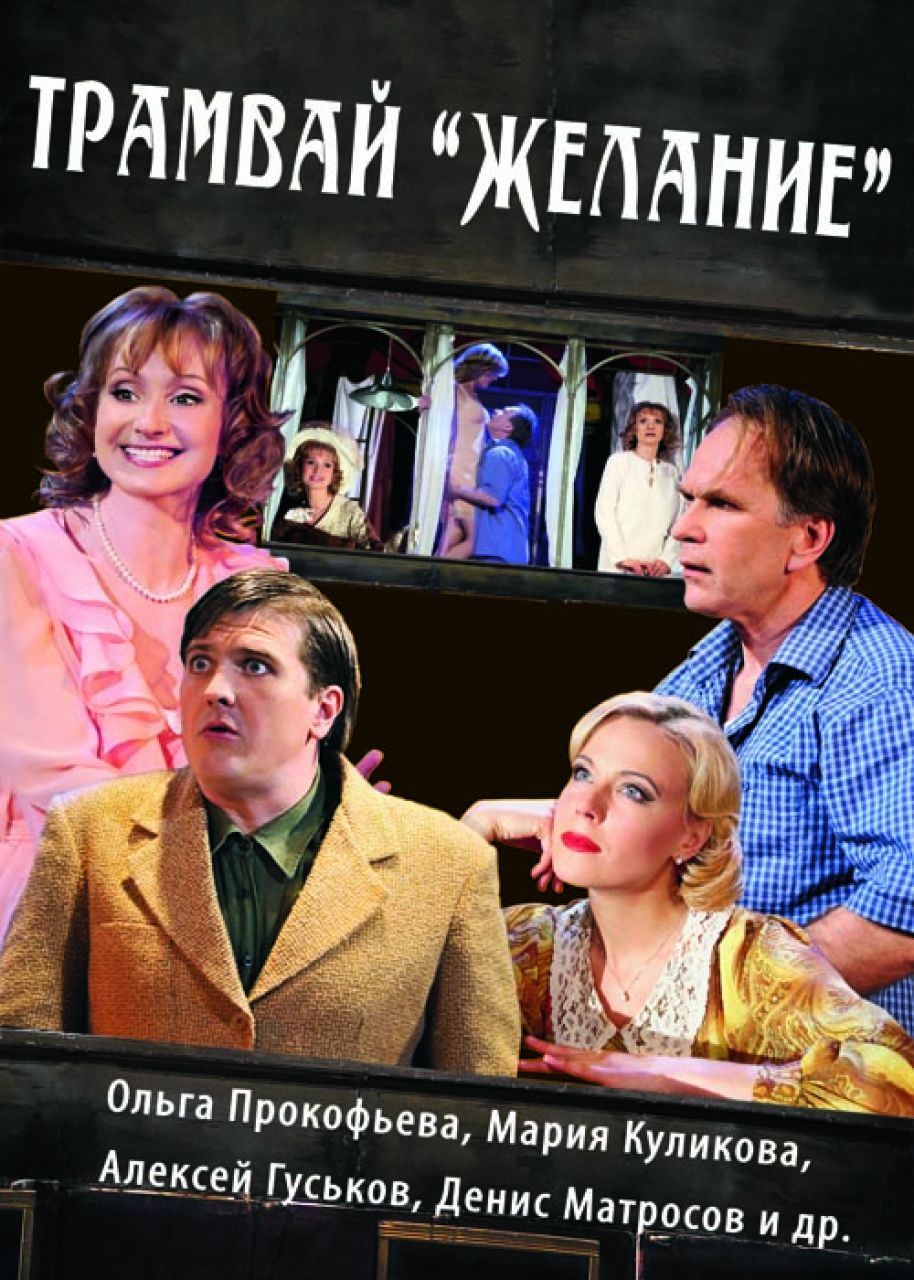 A strong, unforgettable play, magnificent staging and ingenious play by Alexei Guskov and Olga Prokofieva - all this, and a little more in the legendary performance "Desire Tram".

"The Desire Tram" (Eng. AStreetcarNamedDesire) is the most famous play by the great American playwright Tennessee Williams. For this play T. Williams was nominated for the Oscar as the best screenwriter. The work is rightfully considered one of the best plays of the twentieth century. The best drama theaters in the world, cinematographers and great actors paid their tribute to her ... The Desire Tram has been continuing its triumphal procession for more than half a century and has been a resounding success.

The director of the play Alexander Marina (Oleg Tabakov’s pupil, one of the founders of the Moscow Tabakerka) managed to convey to the audience the love story of adults who want to find their happiness after many years of turmoil and knowing that they are doomed to die in a pragmatic society, do not renounce their ideals and love. And the result exceeded all expectations! The performance is the nominee of the National Theater Award Golden Mask 2007, a participant in the Petersburg Theater Season in Prague 2007.

This time the greatest drama will be performed by a truly stellar theater duet. Together with Alexei Guskov, the brightest Russian star, the leading actress of the theater named after Mayakovsky Olga Prokofieva! Sparkling and thoughtful, radiant and tragic, light and deeply sensitive, she will present to the audience her vision of the role of Blanche Dubois - sophisticated, fragile and shattering to the smack of routine and heartlessness. That Blanche, which is close to each of us, that feels and loves so that the viewer dissolves in the beauty of this woman, her irresistible desire to love and be happy. Alexey Guskov - the performer of the main male role plays the proud, merciless, deprived of sentimentality Stanley. A talented, charismatic actor, as a matter of fact, and always, performs this role simply brilliantly.

The performance of the “Desire” tram fully allows the extraordinary, strong emotions of the characters to pour out. In it there is a violent clash of characters, the intensity of sensual passions, there is a psychological story about the collapse of hopes, about a thirst for love, about friendship, about betrayal. This performance is about life. About people. About the house. About the family. About us…

What do you want to see today in the theater? What do you want to feel in the theater today? The answer will be given by the performance “Desire Tram”. This "Tram" goes straight, then crooked, it is like a human life: it winds, accelerates, loudly and piercingly slows down the slippery bumps of life's rails. But we will not reveal all the secrets. If you are for love and sincere attitude - you need to see this performance! If you are overwhelmed by the desire to love and want to live and plunge into the sea of ​​real passions, you should definitely watch this performance!

The Desire tram is the story of two women, two sisters, brought up in a very educated family, but completely opposite to each other. Light and, at first glance, fluttering Blanche, and serious, judicious Stella - they both strive for the same values ​​and want to love and be loved. And for this we’re ready for any sacrifice. Smiling through tears and crying with laughter, Blanche and Stella seek peace and happiness where their Desire tram takes them ...

A tragic story unfolding in front of the viewer begins with the arrival of Blanche to visit his sister. Not finding a common language with Stella's husband, Stanley, Blanche tries to set her sister up against her husband. Stella is trying to resolve the conflict between close people, but it grows like a snowball, bringing one of the sisters to a psychiatric clinic.

The deep, dramatic, directorfully magnificent performance and the inimitable play of the artists make the audience sincerely laugh and genuinely cry and sympathize with the heroes of history. If you want to get an unforgettable experience and discover the unknown secrets of the human soul, get ready to meet with the performance of the Tram "Desire".