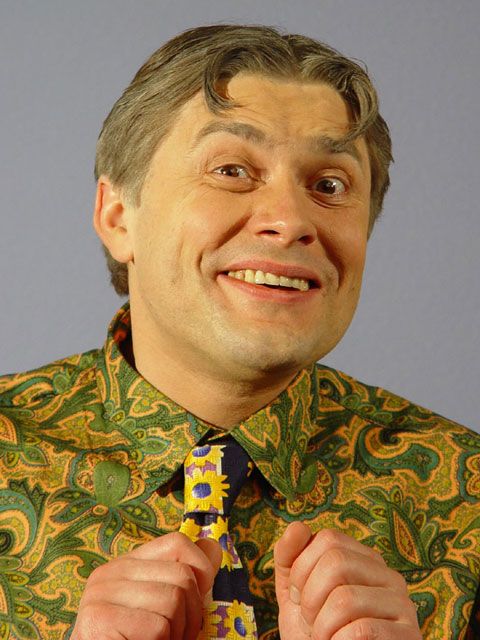 His father taught physics at the Polytechnic Institute, his mother was a student at the same institute. Such a simple situation.

Soon the family moved to the city of atomic physics Obninsk.

He usually spent his summer with his grandmother on the Volga - in the town of Kalininsk, where he mastered the basics of gardening and fishing. He studied in Obninsk, in high schools. He studied well - without triples and with a minimum number of fours. He was friends with hooligans, although he himself was a very intelligent child. He was involved in basketball at a local sports school, since he was not accepted to the football school.

He did not solve the question of choosing a profession, arguing aloud: "I will go to MEPhI without questions. I have a loaf - a teacher." Got a deuce at the entrance exam in physics. I was forced to enter a less prestigious institute - the Moscow Mining Institute. At the end of which he received a diploma of a mining engineer-physicist (specialization "rock physics during open cast mining").

Freely operates with the terms “cross-country”, “Bremsberg”, “cone”, “theodolite”, “level”, “compression tensor”, “tensile sigma”. He spent his youth as a student in the Gornyak-2 hostel on October 60th Street. He played for the MGI basketball team from time to time and not particularly successfully. He was an active member of the amateur song club (KSP), gradually became the ideological leader of the group "Weathervane" - one of the best Moscow groups. He didn’t have a musical ear at that time, but he successfully wrote texts and played in improvised performances “Cleopatra or Egyptian Nights”, “Ball”, “Running on the Waves” and others. He directed the amateur theater MHI “Bright Circle”. He participated in the work of the Military-Patriotic Club named after A. Egorov MGI, whose commissioner - Natalya Barannik - eventually married in order to obtain a Moscow residence permit.

At the end of the Moscow State Institute, it was distributed in the Far East (in the village of Solnechny, Khabarovsk Territory). Rejecting the offer to become an apprentice in the Komsomol district committee, he worked as a mining foreman in a mine. Missing creativity, he gathered an agitation team of young specialists, which was a tremendous success. He dreamed of creating the bloody Bremsberg rock band in Komsomolsk-on-Amur. For family reasons (due to the birth of a large number of children) he moved to Moscow. Childcare did not work, risking an article for parasitism.

For some time (about two months) he headed the laboratory (for the destruction of rocks by electricity), in which he was the only employee. He resigned of his own free will in connection with the transition to work in the youth housing association (youth housing complex).

He mastered many construction specialties, especially the profession of a handyman. In parallel, he led the KVN MGI team, which later became known as MAGMA.

Upon completion of the construction of his own apartment, Sergey Belogolovtsev was invited to the creative group of the program "The Magnificent Seven" - an artistic intellectual-ironic game for teenagers, led by Alexander Akopov. He worked as a script writer and host of the program (together with Roman Fokin and Alesander Akopov).

Collaborated with various television programs. Including "Good night, kids!" (series "Blood and Reinforced Concrete"). For a year and a half, together with Vasily Antonov, he worked as a screenwriter for the Oba-na! Program (last year of release). They own the authorship of almost all the parody hits performed by Igor Ugolnikov.

After the creation of the holding "Business Russia" under the leadership of A. Akopov, he worked on the programs "Titles and special effects", "Once a week" on RTR. With the transfer of a part of the Once-a-Week transfer to the TV-6 channel (MNVK), two new authoring entertainment projects, "Spite the Records!" (which has no analogues in the world of a humorous sports magazine) and the TV show "OSP-studio".

Since September 2002, the OSP Studio program and the series about the Zvezdunov family went on the STS channel. The series "33 square meters" and "Country Stories" enjoy the special love of the audience.

After September 2004, Sergey Belogolovtsev worked as a host in the "Save, repair!" (STS), "Mysteries of show business" (TNT), "Steps" (RTR), "Charging with the champion" (RTR SPORT). He participated in the projects of the First Channel "Big Races" and "Circus with the Stars." He took part in the dubbing of a number of animated films (Asterix and the Vikings, Homa and Suslik, etc.). Andrei Bocharov and Pavel Kabanov acted as the author and performer of the comic strip program “Laughter Scheme” (REN-TV) with colleagues at the OSB studio. and the sketch show "ZZ for three."

Sergey has three sons - Nikita, Alexander (both are students of the faculty of international journalism at MGIMO) and Eugene. Nikita Belogolovtsev works as a host on TVC channels (“Only at night” program) and O2 (“Talk without rules” program).

Wife Natalya Belogolovtseva is a journalist. He currently works as the General Director of OSPP LLC.