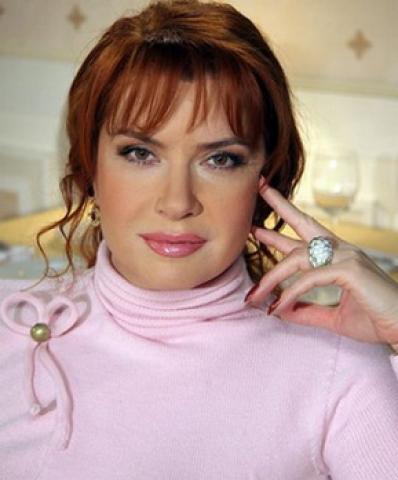 Vera Sotnikova was born in Volgograd. Her parents, who have nothing to do with cinema or theater, tried to instill in their children a love of art. They spent their vacations so that Vera and Galya (sister older than 5 years) would visit the best museums.

The childhood of the girls was generally truly happy. Vera Sotnikova recalls: “Love surrounded me, and I really liked it when my mother praised me. With a warm feeling I remember family holidays, a long table covered with a white tablecloth. Many guests have always come to us. And my elder sister and I helped my mother cook — buns, some roses, salads. Of course, everything that a person absorbed in childhood, he involuntarily tries to project onto his adult life. ”

At the end of the school, Vera decided to enter the theater school on the advice of her sister. She went to neighboring Saratov, but there she was waiting for failure. And then Vera began to prepare for admission ... to the philological department of Moscow State University! Perhaps we would never have seen actress Vera Sotnikova, if not for two references. It is because of these two certificates - from the tuberculosis and neuropsychiatric dispensaries that the girl was not accepted to the university. Fate ...

What happened next is simply amazing. Vera Sotnikova herself says: “Frustrated, I went to the station, took the queue for the ticket. Then they stood for seven hours, to kill time, I went to the "Pike." There was also a line for listening, I also took it. And in the courtyard of the school I met a guy strumming a guitar. He said: "While we are waiting, we will have time to escape to the Moscow Art Theater School." There, future actors listened to Andrei Myagkov. “Why are you reading so badly?” He asked me. “I didn’t accept documents from the university, and the line for a ticket at the Kazan station passes,” I answered honestly. And he says: “You won’t go anywhere!” I was immediately given a hostel, admitted to exams. "

July 19, on her birthday, Vera saw her last name in the lists accepted at the Moscow Art Theater School.

Faith took on the course of the outstanding actor and director Oleg Efremov.

In her second year, she got married, gave birth to a son, who was named Jan. There is one interesting, we can say simply mystical story connected with his birth. Vera Sotnikova admits that when she was about 15 years old, she saw in the Volgograd Pravda newspaper a picture of a boy in blue jeans, suspenders and a white shirt. She really liked him, and the girl said that she would like her to have such a son in the future. And a few years later, while visiting with her husband, she saw a boy in suspenders and jeans, whose name was Jan. He reminded the girl that picture, and she told her husband that she wanted such a son. “It will be,” he promised. Therefore, when the boy was born, there was absolutely no doubt what to call him.

And yet, despite the birth of a son, their marriage was short-lived. Together with her husband, they lived only a year, after which they parted. Moreover, according to Vera, marriage was doomed from the very beginning: “Everything was destroyed there for a long time. Even when I was pregnant. "

For Sotnikova, it was a very difficult period in her life. She had to study and raise her son in conditions of an almost complete lack of money. And yet, in 1982, Vera successfully graduated from the Studio School. In the thesis "Three Sisters" by A.P. She played Chekhov Masha.

In the movie, Vera Sotnikova began acting in 1983. The first work of the young actress was the role of Olga in the socio-psychological drama Igor Voznesensky, "Convict."

In 1984, Sotnikova was accepted into the troupe of the Theater on Malaya Bronnaya. Here she worked for three years, after which in 1987 she moved to the Theater School of Dramatic Art Theater under the direction of A. Vasiliev. And in 1991, Sotnikova became an actress of the Moscow Theater. Moscow City Council.

As for the movie, for a long time the talent of the actress was not claimed in due measure. Vera Sotnikova starred not often and in small roles. The only exception is the adventure movie “Attention! To all posts ... ".

The real breakthrough for Sotnikova was 1989. She played a prominent role in the drama "Gu-ha", which tells about the events of the Great Patriotic War. In 1990, several films with the participation of Sotnikova appeared on the screens at once, among which it is worth noting the criminal drama of Vadim Derbenev “The Hunt for a Pimp” and the love drama of Vasily Panin “I Want to Love”.

Great success Vera Sotnikova brought the Russian-Greek painting "Byron". For the role of Augusta Sotnikova, she was awarded in 1992 at the Thessaloniki Film Festival Prize "For Best Actress in a Supporting Role". By the way, the best works of Vera Sotnikova in the 90s are undoubtedly historical roles. It is worth remembering her Catherine Dolgorukaya in the drama "The Emperor’s novel" and Henrietta in the television series "Queen Margot".