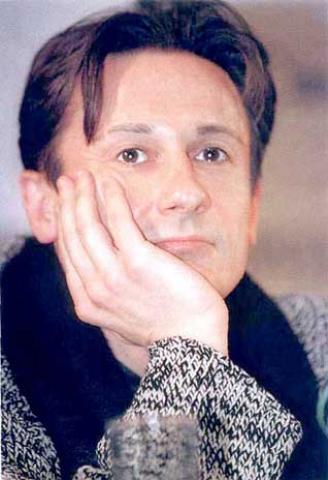 Born on November 8, 1960 in the city of Serpukhov, Moscow Region.

Oleg was born in the family of a military engineer and doctor. Soon, the Menshikov family moved to Moscow. At six, he went to elementary school. From childhood he was fond of music and his parents, noticing the boy’s inclination, sent him to a music school in the violin class. Oleg even played in the ensemble of young violinists in Moscow.

In 1977, after graduating from comprehensive and musical schools, Menshikov entered the Moscow Theater School. Mikhail Schepkin (course of Vladimir Monakhov).

At school, he took part in student performances, played the roles of a German officer in the play "Invasion" by Leonid Leonov, Milovzorov in "Guilty Without Guilt" based on Ostrovsky's play.

In 1985, after the end of the army service, Menshikov moved to the Moscow Drama Theater. M. Yermolova at the invitation of Valery Fokin, just appointed the main director of the theater.

In 1989, Petr Fomenko invited Oleg Menshikov to the Mossovet Theater for the main role in the play Caligula based on the play of the same name by Albert Camus, for which the actor received an award and a diploma from the Moscow Seasons Festival.

In 1991, he played the role of Sergei Yesenin in the play "When She Danced" based on a play by Martin Sherman at the London Globus Theater, where he played a duet with the famous English actress Vanessa Redgrave. In 1992, for performing this role, the actor was awarded the Lawrence Olivier Prize of the British Academy of Theater Arts.

In 1994, Menshikov again played Yesenin in the play "When she danced", but already staged by the Paris Comedy Theater on the Champs Elysees.

In 1992, Oleg Menshikov played in London on the stage of the Triisecl Theater in the play "Players" by Gogol (the role of Ikharev).

In 1993, he played his next theatrical role in the entreprise "Bogis"; it was the role of the great Russian dancer Vaclav Nizhinsky in the play "N" Nizhinsky, based on the diaries of Nizhinsky (author of the dramatic basis Alexander Burykin). The performance was awarded the Crystal Rose Prize (1993).

In 1998, Oleg Menshikov created and headed the entreprise "Theater Partnership 814", where, as director and actor, he created a play based on the play by Alexander Griboedov, "Woe from Wit" (1995), in which he played the role of Chatsky. In his subsequent productions of “Kitchen” by Kurochkin (2000), “Players” by Gogol (2001), as well as in the play “Demon” by Lermontov directed by Kirill Serebrennikov (2003), he also plays the main roles. In 2008, in the “Theater Partnership 814”, he staged a one-man show based on the work of Alessandro Baricco “1900”.

In parallel with the theatrical works, Oleg Menshikov is actively filming a movie.

Oleg Menshikov played his first role in the movie - reconnaissance Shurka in the film "I Wait and Hope" by Suren Shahbazyan, in 1980, as a fourth-year student at the school. Then came the supporting roles in the films "Relatives" (1981) by Nikita Mikhalkov and "Flights in a Dream and Waking" (1982) by Roman Balayan. Studying in the last year of the Theater School, Menshikov starred in the main role in the film by Mikhail Kozakov “Pokrovsky Gates” (Kostik). The film, released in 1982, brought the actor popularity and love of the audience.

In 1994, Oleg Menshikov starred in Nikita Mikhalkov’s film “Burnt by the Sun”, the role of which became one of the brightest in the actor’s creative biography and brought him several awards: the State Prize of the Russian Federation (1996), the Kinopressa prize - “Best Actor of the Year”, professional Award for Best Actor "Green Apple - The Golden Leaf."

The next role in the film directed by Sergei Bodrov Sr., "Prisoner of the Caucasus" (1996, Russia, USA) was also awarded with many awards, including: "Golden Aries", Grand Prix at the Kinotavr festival for best actor, prize for best actor III International Baltic Pearl festival in Riga, professional cinema award "Nika" for best actor (all 1996), State Prize of the Russian Federation (1998).

In 1998, the actor again starred in Nikita Mikhalkov's film "The Barber of Siberia", for whose work he was awarded the third State Prize of Russia, as well as the Golden Knight for the best male role.

In 1999, the film "Mom" directed by Denis Evstigneev with his participation was released. In the same year he received an invitation to one of the main roles in the film Regis Varnier "East - West" (France). The film was nominated for an Oscar in the category "Best Foreign Film".

In March 2010, the premiere of a new film with the participation of Oleg Menshikov "What Men Talk About" took place.

Since 1998, Menshikov heads the Foundation for the Support of Russian Culture. He is a permanent member of the independent jury of the Triumph Prize in Literature and Art.

In 2002, he established the award for Russian theater critics "Best critic of the season" to them. Alexander Kugel.

In 2003, Oleg Menshikov was awarded the title of People's Artist of Russia (bypassing the Honored).

For his theatrical and cinematic activities, Oleg Menshikov was awarded many prizes and prizes. In 1987, for his participation in the movie "Moonzund," he was awarded the silver medal named after A.P. Dovzhenko.

In 1996, Oleg Menshikov was awarded the Golden Aries prize for the year “Universal Actor - the Leader of the Cinematographic Generation”; in 1997 - the Grand Prix of the Kinotavr festival for best actor and prize for best actor at the Baltic Pearl international film festival, as well as the Nika professional cinema award for best actor. He is a laureate of two awards "The Seagull" (for the role of Chatsky in "Mountain from Wit"; for the best acting ensemble - the play "Players").

In 2004, Oleg Menshikov received one of the main French awards in the field of art, the government order "Academic Palms". He was also awarded the French Order of Arts and Literature.

At the Locarno festival in 2004, Oleg Menshikov became the first winner of the prize "For contribution to acting."

Pyotr Shepotinnik made a documentary about Oleg Menshikov "Players, or Oleg Will Come Out Now".