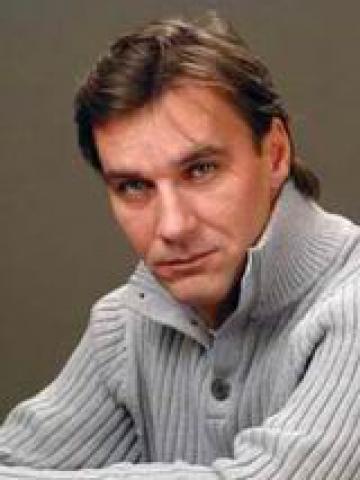 In Moscow, Igor Lagutin applied immediately to five theatrical universities. To be sure. Passed in three - Schukinskoe, Shchepkinskoe and VGIK. As a result, his choice fell on the Shchukin school. Studying in the third year with Alla Alexandrovna Kazanskaya, Igor Lagutin played the role of Amethistov in the performance of G. Chernyakhovsky “Zoykin's apartment”. The performance was liked by Mikhail Alexandrovich Ulyanov, and he transferred it to the stage of the Vakhtangov Theater.

In 1989, Igor graduated from the Schukin School and, having worked for six months in the theater of Evgeny Rubenovich Simonov, came to the theater named after Vakhtangov. Chernyakhovsky again brought him into Zoykin’s apartment, but not from Ametistov, who was played by Maxim Sukhanov, but from Goose. As the actor himself admits, he really liked this role. In addition, over the years of work in the theater he played such roles as: Calaf in “Princess Turandot”, Count Schönburn in the play “Sovereign you are our father” by Mackey-Knife in “The Opera of the Paupers” (staged by Chernyakhovsky on the play “Three-Penny Opera”), the robber in the tale “Ali Baba and the Forty Thieves,” directed by A. Gorban and others.

In the late 90s, Igor Lagutin left the theater. Leaving the Vakhtangov Theater, Igor took up the tourism business for a while. He traveled to Spain to have an idea of ​​a new field of activity, but soon realized that this was not at all for him. Just at that time (1999), the head of the Moscow Academic Theater of Satire, Alexander Shirvindt, suggested Igor go to him.

In the Satire Theater, Lagutin is engaged in many performances, including: “Krechinsky’s Wedding”, “The Taming of the Shrew”, “Apple Thief”, “Schweik”, “Crazy Money”, “We Still Have Fun” ...

Igor Lagutin is married. His wife Oksana Lagutina is also an actress. She plays in the Moscow Youth Theater. Among her works in the cinema are roles in the film directed by Shakhmalieva “Smoke” according to Turgenev and in the series “Airport” by Yegor Grammatikov. Oksana and Igor have two children: daughter Dasha and son Arseny. Arseny has already managed to star in addition to the Code of Honor in the TV series Star of the Epoch and Always Say Always.