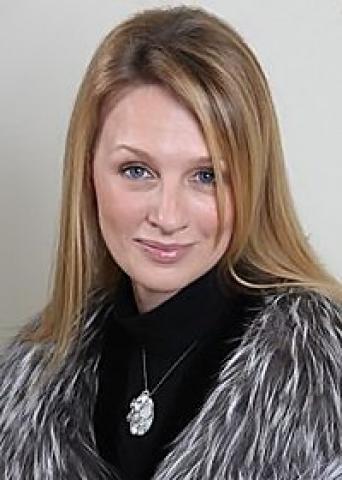 Actress of the Moon Theater. He plays in the performances of the State Theater of Nations.

In theatrical circles of Moscow, Julia Romashina is known as the actress of the "Theater of the Moon" by Sergei Prokhanov, in cinematographic circles - as the widow of the famous actor and director Anatoly Romashin. Perhaps someday she will be able to claim the title of “Queen of the episode” in Russian cinema, because in her small filmography there are almost no “full-fledged”, expanded roles.

During the life of her husband, Julia Romashina did not include an acting career among her priorities - she was quite happy with the mission of a loving wife and mother. There were a lot of rumors and gossip about their marriage with Anatoly Vladimirovich, and the main reason for discussion was a huge difference in age. Romashin met a young student of the Karpenko-Kary Theater Institute of Kiev Yulia Ivanova on the set of the film “Studies in Vrubel” in Ukraine. After a tiring flight, he barely kept his feet. He had no time to even rest and have a bite, and, in fact, none of those around him had the slightest concern. A thin girl with huge cardboard wings behind her back, rehearsing the role of an angel, went up to him and suggested: "Do you want me to feed you buckwheat porridge?" So heartthrob and subtle connoisseur of female beauty, Anatoly Romashin, and met his third half. He already had two failed marriages behind him - in his student years he married a Muscovite named Galina, and later on - Spanish actress Margarita Merino.

At the time of this fateful meeting, Julia was barely eighteen. And Anatoly Romashin was already fifty-eight years old. But he later said that it was the years that separated them that helped him to appreciate all the best human qualities of his new chosen one. Anatoly Vladimirovich called Julia a bright, clean and unusual girl for modern times. He invited her to play the role of a nun in his film “Without Hope,” and in between filming he made her an offer to become his wife. Both believed that they should not advertise their relationship, and therefore the wedding ceremony was modest and quiet.

On the advice of her husband, Julia Romashina entered the Shchukin Theater School, but even there she did not particularly spread about her personal life. In an interview, she said that after all, the secret once became apparent, and the first to know about it was the head of her course, Alexander Shirvindt, who was also a close friend of Anatoly Romashin. Shirvindt’s indignation knew no bounds: in his opinion, a colleague acted dishonorably, dragging a young girl into such a responsible matter as family. But the Romashins were already expecting a baby. Soon they had a boy. For Anatoly Vladimirovich, the father of two daughters, the significance of this event was simply impossible to overestimate. He gave his son the name Dmitry and was happy to put together the letters of the child’s initials so that it turned out “GIFT”. “Son for me is a gift of God,” the elderly actor did not tire of repeating.

Julia and Anatoly Vladimirovich lived together for twelve years, until he passed away by ridiculous accident. Romashin decided to cut a pine with a chainsaw in the country and did not calculate his movements: the tree fell directly on him. This happened in 2000. Julia was always aware that one day there would come a day when her husband left her, but she hoped along with him to at least “raise her son” to her feet. Anatoly Romashin was going to live at least eighty-three years old, and died at seventy.

After the death of her husband, Julia had a hard time: working in the theater did not bring a lot of money, she still had a small child in her arms, and the directors were not in a hurry to fill up the films with offers to film her. She played several episodes - in the famous "Truckers", the drama of Alexander Zamyatin and Yegor Grammtikov "Airport", detective Anatoly Mateshko "The myth of the ideal man", the crime drama Stanislav Libin's "Revenge", worked on the voice acting of foreign paintings. Then she began to appear on screens more often, and for the most part - in serial formats.

In 2008, Julia Romashina gave birth to a second child - the son of Daniel. She carefully conceals the name of his father from strangers, but rumor ascribes to her an affair with the producer and director of La Theater Vadim Dubovitsky. In women's online magazines they even write that Vadim is ready to divorce his first wife in order to legitimize his relationship with Julia. But both Romashina and Dubovitsky refuse to comment on such rumors.