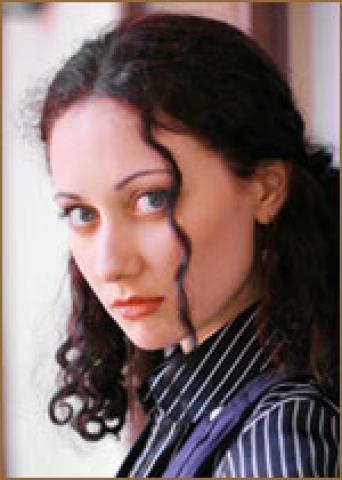 In 2006 she graduated from SPbGATI (course of V.I. Podgorodinsky). Along with her studies, she was accepted into the troupe of the Rock Opera theater, where she worked until 2005.

In 2010 she was accepted into the troupe of the theater “Through the Looking Glass”.
THEATER WORKS
West Side Story - Anita;
The Magic Flute - Papagen, The Third Boy;
"Children's Album" - Clowness;
"Thumbelina" - Swallow;
"The cat that walked on its own" - Wild cat;
"Tiny-Havroshechka" - Mistress;
“Ludwig and Tutta, or the Lesside story” - Fox-mother, Zaychikha;
“Love drink” - Bianca, Teresa;
“Shooting Stars” - Chantal de Milo;
"Peter and the Wolf" - Cat;
"Robinson Crusoe" - Liliana, Lily;
"The Tale of Rikki-Tikki-Tavi" - Nagayna.