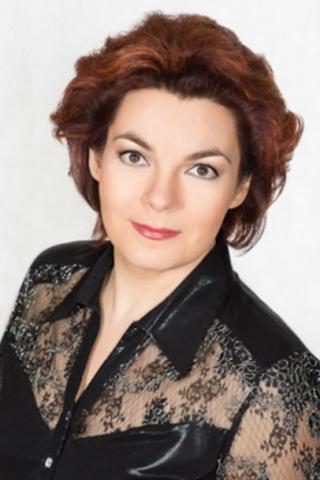 Born in Moscow. In 1991 she graduated from the conducting and choral department of the Gnesins' Music College; in the 94th, the conducting and choral faculty of the Gnesins Russian Academy of Music; in the 96th - the vocal faculty of the Gnesins RAM (class of L. Yaroslavtseva); in the 98th - an assistant-internship with the same teacher (all diplomas with honors, was a scholarship holder of the Knowledge Fund).
Since 1997 - trainee, from the 99th - soloist of the Bolshoi Theater Opera Company.
Repertoire
Her repertoire at the Bolshoi Theater included the following parts:
Petrovna, Dunyasha, Lyubasha (The Tsar’s Bride by N. Rimsky-Korsakov)
Old Gypsy (Aleko S. Rachmaninov)
Princess Lynette, Princess Clarice (“Love for Three Oranges” by S. Prokofiev)
Martha ("Iolanta" by P. Tchaikovsky)
Amelfa (The Golden Cockerel by N. Rimsky-Korsakov)
Zakharyevna, Fedor Basmanov (The Oprichnik by P. Tchaikovsky)
Governess, Polina, Countess (The Queen of Spades by P. Tchaikovsky)
Vlasyevna (The Pskovite Woman by N. Rimsky-Korsakov)
Vanya (“Life for the Tsar” by M. Glinka)
Bobylikha, Lel (The Snow Maiden by N. Rimsky-Korsakov)
Mademoiselle Blanche (“Player” by S. Prokofiev, first edition)
Olga ("Eugene Onegin" by P. Tchaikovsky)
Fenena (Nabucco by J. Verdi)
Marie (The Flying Dutchman by R. Wagner)
Fortuneteller (“Fiery Angel” by S. Prokofiev)
Wagner (“Children of Rosenthal” by L. Desyatnikov) - first performer (world premiere)
vocal solo (M. de Falla's ballet “Triangle”)
Gypsy Matresha, Mavra Kuzminichna (War and Peace by S. Prokofiev)
Ksenia’s mother (“Boris Godunov” by M. Mussorgsky)
Alkonost (“The Legend of the Invisible City of Kitezh and the Maiden Fevronia” by N. Rimsky-Korsakov)
The Snow Queen (The History of Kai and Gerda by S. Banevich)
Soprano ("The Tale of the Priest and His Worker Balda" by A. Pravednikov - performance "Tales of the Fox, Duckling and Balda")
Sonnetka (“Katerina Izmailova” by D. Shostakovich)
Epanchina ("The Idiot" by M. Weinberg)
Filippievna (“Eugene Onegin” by P. Tchaikovsky)
Svyatiya Baba Babarikha (The Tale of Tsar Saltan by N. Rimsky-Korsakov)

In 2003, she performed the viola part in the symphony-cantata "Song of the Earth" by G. Mahler (the ballet of the same name performed by the ballet troupe of the Covent Garden Theater during a tour at the Bolshoi Theater).
In 2012, at the Morihiro Ivata Creative evening at the Bolshoi Theater, she played the role of Katarite in the ballet Tamashi to the music of the KODO group.
In collaboration with Larisa Golushkina, she wrote the script and staged the play “Nikolai Golovanov. The Secret ”, based on fourteen romances of N. Golovanov performed by Evgenia Segenyuk (Moscow, 2015).
In October 2017, she participated in the concert performance of the opera Pskovityanka by N. Rimsky-Korsakov (conductor Tugan Sokhiev), performing the part of Vlasyevna.

It has an extensive chamber repertoire. Tours abroad.