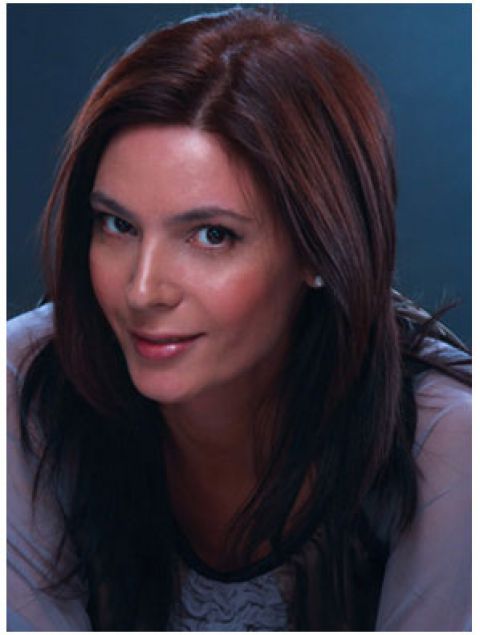 Lidia Velezheva was born in 1966. Five minutes later than her sister Irina. Mom worked in a tobacco factory, raised her sisters, first alone, then with her stepfather. He is a retired colonel, and the girls considered him to be his father. They did not communicate with his father.

Lidia Velezheva about her surname: "They say that the surname is allegedly of Yugoslav origin. In general, there is so much blood mixed in me: Russian, Ukrainian, Italian, Spanish ... And my great-grandfather was a gypsy baron."

Lida and Irina studied at the boarding school, as my mother worked in different shifts.

Lidia Velezheva talks about her childhood: “My sister and I went to a boarding school. Not because we were orphans. My mother was at that time alone, without a husband, she worked in the factory in two shifts. There could be no talk of any nannies. And she was very worried about us. We were curious: to set fire to a piece of paper under the cupboard, open the faucet and watch the water flowing — that was a sweet deal for us. And most importantly, my mother was worried that we would not stay hungry. So she decided send us to a boarding school, she said, they say, you’ll live there for two years, you will grow up, and I will take you. I really liked it there. The atmosphere was kind, everyone helped each other, the teachers got very good. After studying, there were circles and sections. I tried everything at the boarding school: I went to the folk dance club, started playing handball, the rink was flooded - the first one got on figure skates We were not afraid of any work. For example, I was on duty on Thursdays in the kitchen. So we three washed all the dishes after two shifts, the floors were really scrubbed, and not just dust. It can be seen that since then I have for all my life no fear of difficulties.

We always protected children younger than ourselves, who approached us with complaints. And I, like some sort of bandera, arranged disassembly for the offenders. And since I was engaged in handball - I was standing on the goal, my hand was heavy. Once, one girl said bad words to my sister. She was a volleyball player, much taller than me. So I climbed onto the desk and hit her with my hand on the head from above. The girl fell, she turned out to have a slight concussion ... Therefore, I was afraid: who should get the skull hunting? And of course, many boys liked me. "

The boarding school was a real school of survival. Probably from here Lydia has such a character, determination, confidence.

Velezheva always wanted to be a film actress. Not embarrassed, wherever possible, she sang, danced, recited.

At the age of 13, she herself came to the Dovzhenko Film Studio for the first time - brought a photograph for a children's acting filing cabinet. The girl sitting in the window wrote down all the data, then looked at Lida carefully and said: "Wait a minute, baby, don’t leave." Then she called somewhere and said: “Then the girl came, in my opinion, what you are looking for” ... So Lida was approved for the main role in the film “Waiting”. Many famous actors worked there: Pashkova, Grinko, Talyzina. And Yuri Vasilyevich Katin-Yartsev, who was teaching at the Shchukin school at that time, went up to Lida’s mother and said: "Lidochka must go to the theater, go to Moscow."

Lidia Velezheva arrived in Moscow, but did not go to Katin-Yartsev - she was frightened. And she was wildly worried that he would recognize her at the contest, she was afraid that she would be embarrassed. But he did not recognize. Then, when there was the first lesson in the skill of the actor, which was just led by Yuri Vasilyevich, he suddenly said: "It seems I saw you somewhere." Then Velezheva reminded of herself. How he laughed! Then he asked: "Why didn’t you tell me something?" And just in the family of Lydia Velezheva, it was customary to rely only on her own strength, not to ask anyone about anything. To ask for others - please, for yourself - no.

In 1988, Velezheva graduated from the B.V. Shchukin Theater School and got a job at the Moscow Academic Theater named after Evgeny. Vakhtangov.

The husband of Lydia Velezheva is a famous actor and producer Alexei Guskov.

Lydia Velezheva recalls her first meeting with her future husband: “It was at the Detective Theater, where Lesha and I invited Livanov to play in the entreprise. They rehearsed. I arrived early and began to wait for a partner. I see Guskov hurriedly walking. He walks past me , suddenly stops and says: “Girl, do you have matches?” I looked at him and realized: this is my Destiny, this is the person with whom I will live. Then I could not take my eyes off him from rehearsal. I don’t know what it was a hunch, probably ... When I saw Lesha for the first time, then with she showed herself that this man would become my husband.

The wedding was modest, we didn’t really want a magnificent one, and we didn’t have any special money then. Rings were made to order, silver. For some reason, we liked those. "

About her personal life, Lidia Velezheva says: “It is difficult to have two boys. I control them in everything, I can raise my voice. True, only when they don’t understand from the fifth time. Such a family was sent to me by fate. I have to accept it. Yes, of course, it’s not easy. But I never panic. Guskov tells his sons: “We have one mother, we must take care of her.” He is the head of the family. Even I give in to him, I do everything as he says. And when he is not at home, I’m the main one. But there is still authority in our family - mother-in-law. Husband, I and the children simply adore her. I am grateful to her for much. not a good person.

I try to do everything around the house myself. Although the mother-in-law helps. If there is no filming, but only a theater, then in the afternoon there is time for washing and cooking. "I have long been drawn into this, and if I mess around, I’m going crazy, although I can afford to sleep and be lazy."

In the movie, Lidia Velezheva was unknown to a wide audience for a long time. And this despite fourteen roles, among which the main roles in the romantic drama "The Enchanted Wanderer", the adventurous melodrama "Moscow Love", and the television series "Gypsy Island".

In 1991, Lidia Velezheva starred in the film by Ivan Vasilyev "Veniks. Floor Brushes." The actress got a very unpleasant story with this film. In her absence, the director took off the understudy, made up under Velezhev, naked. He went to this, knowing that the actress never starred in such scenes. By the way, this was not the case in the script. Velezheva categorically demanded the exclusion of this scene from the film, to which the director refused. As a result, she sued and won. The director paid compensation, but the film never appeared on the screens.

Last name Velezheva sounded as soon as she played a major role in the television series "Thief". Velezheva entered the image of the heroine of the series so well that in her life there were more than once funny situations. She says: “Let’s go, let’s say, to the store, I suddenly hear a worried whisper nearby:“ Hold the bag, bag tight, thieves are here. ”I look around and understand that the woman means me. Or I’m sitting in a cafe, the waitress approaches me, sets a cup of coffee and so confidentially conspiratorially asks: "You really, in life, what? The same rubbish as in the movies? "".

Before Lydia could come to her senses, a second, more powerful, wave of attention to her arose - in connection with the continuation of the famous detective series "Connoisseurs Conducting" on the screen. Here she played the expert Kitaeva instead of the dead Elsa Lezhdy, who had previously played Cybrit.

The actress was very worried about how Georgy Martynyuk and Leonid Kanevsky would perceive her: “They treated me so kindly, kindly. They helped, did not scold me for mistakes, they reassured me. When I first came to the site, I was certainly worried before meeting with "How do they perceive the other actress? The three of them were as a whole. But my fear disappeared instantly - as soon as they both smiled at me and accepted as theirs."

Unlike Elsa Lezhdey, who stubbornly struggled with the scriptwriter's attempts to arrange her personal life or at least toss her a fan from the Higher Police School, Velezheva-Kitaeva lives and works under the motto "You can be a good captain and think about the beauty of nails." The new heroine also dresses fashionably, and runs around beauty salons, and a stormy personal life behind the scenes is easily guessed. But when it comes down to business, she turns out to be a brilliant professional.

In 2003, Velezheva starred in the role of Nastasya Filippovna in the series of Vladimir Bortko's "Idiot" based on the novel of the same name by Dostoevsky. For this role, the director was looking for an actress for a long time. Among the applicants were such celebrities as Anna Samokhina and Anna Bolshova. However, luck smiled at Lydia Velezheva, who most convincingly burned old money on samples. By the way, the actress received a blessing from the national artist of Russia Yulia Borisova, who played Nastasya Filippovna in “Idiot” by Ivan Pyryev in 1958.

"Such a role happens once a thousand years, I just pulled out a lottery ticket," - says Lidia Velezheva.

Currently working in the Theater. Vakhtangov. In her repertoire: Emilia in the play Othello, Adelma in Princess Turandot, Otradina in Guilty Without Guilt, Shahrezad in Ali Baba and Forty Thieves. She also played in the performances "Cylinder" and "Rings, Nabat!".