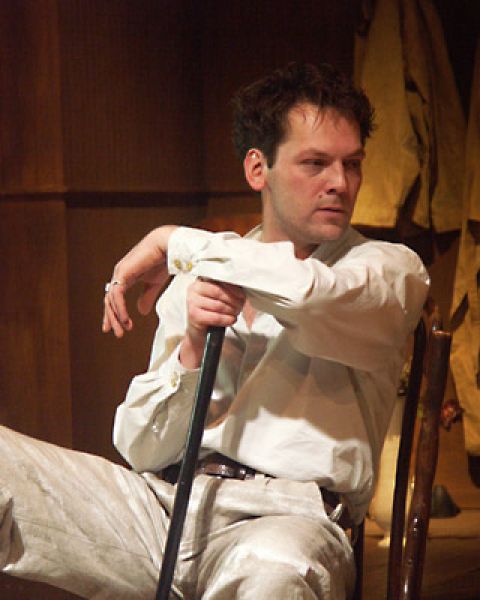 The ancestors of Dmitry Shcherbina, both maternal and paternal, are Cossacks. In Soviet times, they were dispossessed. By fate, his father and mother ended up in Baku, where Dmitry was born on October 1, 1968. After the death of his father, Dmitry and his mother moved to Minsk. There passed his adolescence.

At the end of school, Dmitry went to conquer Moscow. He entered the Moscow Art Theater School on the course of Vanguard Leontyev. There, in Moscow, he met his love - actress Olga Pavlovets.

Dmitry graduated from the studio in 1993. But a year before, he began to play in the studio theater under the direction of Oleg Tabakov. Among his roles: Vikovsky in the play “Biloxi-blues”, Count Novinsky (“Ordinary History”), white officer (“Passion for Bumbarash”).

In addition to working at the Moscow City Council Theater, Dmitry takes part in performances by the International Confederation of Theater Unions. So he happened to play the capricious butler Malvolio in the play "Twelfth Night", staged by the Englishman Declan Donnellan. Donnellan appreciated the talent of the young actor and later invited him back to his play - for the role of Prince Kurbsky in the production of Boris Godunov.

Dmitry Shcherbina made her film debut while studying at the Moscow Art Theater School. In 1992, he played a major role in the detective Timofey Spivak "Three days outside the law." In this picture, his hero, the former paratrooper Andrei, bravely confronts criminal gangs. In the same year, Dmitry played a cameo role in another detective story, “Diamonds of the Shah,” directed by Boris Neberidze.

The actor’s first fame was brought by Alexei Sakharov’s melodrama The Young Lady-Peasant (1995), based on the novel by Alexander Sergeyevich Pushkin. In that picture, Dmitry played the young handsome barin Berestov. Recalling that work, Dmitry says that it’s “great happiness to be faced with such a language, drama, director, actors at the very beginning of his journey.” The film was shot by wonderful actors Leonid Kuravlev and Vasily Lanova, as well as the talented Elena Korikova. The film was a great success, collecting a whole bunch of various prizes at various film festivals.

However, the movie still did not pamper the actor. True, a year after the release of "The Young Lady-Peasant Woman", Shcherbina again starred in the crime scene, playing the main role in the action movie "Running from Death." This work of the actor was awarded the Jury Diploma "For the best leading male role" at the Golden Knight-97 International Film Festival. But more in the 90s, Dmitry did not have noticeable roles.

Dmitry played another role in 2000. In the Black Room trilogy, Dmitry appears in the very first film of Bushido. Against the background of the samurai film, the boss Nikolai Ivanovich (Chindyaykin) plays chess with his bodyguard (Shcherbina), in the course of the game, the banker teaches the life of a young security guard.

As you can see, with the exception of “The Young Peasant Woman” (by the way, one of the actor’s best works), the directors use Shcherbin in criminal films. The actor’s new work was not an exception - the series “Nikolai Dostal” “Stiletto”. On this occasion, Dmitry notes: “The Black Room”, “Three Days Outlawed” were partly criminal stories, but in the cinema and in the theater, I try not to have a common approach to the roles. Each character is a meeting with a new person, and there can be no repetition of what has been done here. ” Moreover, according to Dmitry: “Stiletto” is not a story with a scuffle, but a good event tape of the movie level, which is a great merit of the director Nikolai Dostal, with whom we thought through every episode to the smallest detail. ”

In the series "Stiletto" Dmitry played Ignat Voronov, a former employee of secret intelligence agencies. In order to better enter the image, the actor used the services of specialist consultants, watched how they move, communicate. In addition, his student experience helped. Even while studying at the Moscow Art Theater School-Studio, Dmitry, under the guidance of a stage designer, Felix Ivanov, studied wushu philosophy.

Work in the television series "Stiletto" was highly appreciated. After his release, Dmitry Shcherbina was called "Discovery of the Year."

In 2004, Dmitry Shcherbina played the main role of Stepan in the 20-episode film "Two Fates." The series was shot in the genre of “urban romance” based on the novels by Semyon Malkov “Blackmail” and “Payback”. At the V Eurasian Teleforum, he was awarded the prize for best directing and commitment to the television theme.

After the show, Dmitry Shcherbina significantly increased the interest of the audience. The actor himself says: “Often called Stepan, but I would not dare to talk about a surge of love. Not even a request for an autograph is dear to me, but smiles of passers-by. And the best praise for acting is when they don’t recognize me. ”

Dmitry Shcherbina currently lives and works in Moscow. In his conversations with reporters, he refuses to talk about his personal life.